For years, hundreds of undocumented immigrants have been working in slave-like conditions at the privately run Northwest Detention Center in Tacoma. As a result of persistent advocacy on the part of immigrant rights activists and above all, by the ongoing hunger strikes and other actions by the detained immigrants, conditions in the NWDC have become better known to the general public. As a result, on September 20, Washington State Attorney General Bob Ferguson filed a lawsuit against Geo Group Incorporated after public outrage over the living conditions of the NWDC detainees. GEO, a company that brought in over $148 million in profits in 2016  makes detainees work for $1 a day (sometimes less) at their facility.

The lawsuit cites two violations allegedly committed by GEO. First, GEO violated state law which declares, “Any resident, inmate, or patient of a state, county, or municipal correctional, detention, treatment or rehabilitative institution” is protected under minimum wage laws, which Ferguson argues makes the current practice of massive underpayment at NWDC illegal. The second allegation is that through means of abusing detained persons, GEO cruelly made profits through the work of people in their “care.” Despite all this, GEO asserts that it is innocent of any wrongdoing! 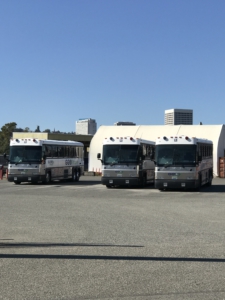 It is not hard to see GEO’s hand in the day-to-day operations at NWDC. Large buses with blacked out, barred windows and the company’s logo in blue letters are parked right outside the facility. These are used for hauling away the friends and family of the people of the Northwest, but the nightmare does not stop there for the people detained.

“Horrible” is the word used to describe the circumstances of detainees at the NWDC by activist Maru Mora Villalpando, head of the grassroots organization NWDC Resistance. “[NWDC] is meant to make money,
so GEO charges between $265 to $285 dollars per day, per person” said Villalpando.

A terror campaign against undocumented workers

Immigration and Customs Enforcement arrests migrants for many reasons and in many different ways. Migrants can be pulled over, leading to detention; they can also be reported by other individuals. The most brutal method has been the gestapo-like raids in apartment buildings and houses. These raids terrorized communities all over the country under President Obama and are expected to get worse under President Trump. “It has always been an irony cause a lot of the people inside were detained because they did not have a Social Security number to work with and they were found being employed,” said Villalpando.

Villalpando has organized several demonstrations in front of the detention facility’s building. Her work and that of her comrades range from first amendment protected protest to acts of civil disobedience. Her group’s actions even inspired a hunger strike amongst the center’s inmates, one of the largest of its kind.

A history of violence

The lawsuit against GEO is not a new occurence for the company, which has a deeply troubling past. Several lawsuits have already been filed against the company, alleging misconduct ranging from failure to provide adequate food and medical care to reports of the rape of inmates by prison guards, as well as other accusations.

These allegations are not limited to the U.S. as the company also has facilities in several other countries, most of which have been cited for unsatisfactory conditions. GEO runs Dungavel Castle, an immigrant detention facility in Scotland. In 2015 Her Majesty’s Inspectorate of Prisons criticized this prison for failing to protect the prison’s most vulnerable occupants: children. This is following a 2004 report from the Children’s Commissioner for Scotland that called the prison “morally upsetting” and threatened to take up legal action with the UN’s Committee for Rights of A Child. GEO was also in charge of operations at the notorious U.S. military prison at Guantanamo Bay from 2006 through 2012.

Though the lawsuit is a step in the right direction for the inmates of the Northwest, the fight will likely be a long one. GEO group was a contributor to the Trump presidential campaign and can expect to be treated favorably by federal courts. The openly racist and xenophobic character of the Trump agenda further minimizes the likelihood of any action on the federal level against prison-industrial giants such as Geo Group. The scope of the suit does not, and cannot include any steps toward the dismantling of the prison-industrial complex, even within Washington State alone.

The bourgeois state cannot solve the fundamental problems of capitalism that give rise to the terrible conditions of exploitation and cruelty at NWDC.  At best, we can expect only partial compensation for the victims and revocable reforms to the process itself to result from the efforts of the Attorney Generals Office.

While we welcome any relief for the suffering workers at the NWDC, we recognize that the only way to attack the root cause of these injustices is to dismantle capitalism itself, as well as the state apparatus that
protects and supports it. Only through a sustained struggle to overturn the system of profit that drives prisons like NWDC can the people bring justice to the men and women imprisoned there.