From mourning to vigor in Philadelphia 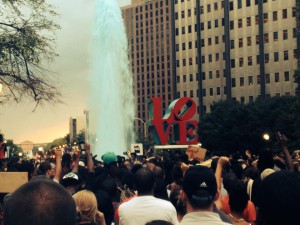 On August 14, as part of the National Moment of Silence actions coordinated in solidarity against the racist police killing of Michael Brown and with the resistance of the people of Ferguson, independent members of the community organized a vigil at Love Park in center city Philadelphia.

Like others across the country, it was a largely solemn event. Hundreds of families and community members gathered together as the names of the victims of police brutality were read, the air fell silent as homage was paid to their legacies, and held were hands high in the air to symbolize the “Hands Up, Don’t Shoot!” chant that has echoed from Ferguson across the world.

After the vigil was concluded, some organizers suggested regathering at a nearby location
for a photo opportunity, and those who wished to take part began to follow. Some remained behind. Radical youth organizers, PSL members, and other activists experienced in connecting with the people, took heed of the mood of the crown and organized a march on the spot, and quickly began rallying the crowd in Love Park with chants.

Just then, a sudden thunderstorm showered upon us, but by that time the energy of the march and the unity in cause of the protestors persevered. The march was directed underground to Suburban Station where resounding chants of “Don’t touch our kids!”, “He was only 18!”, and “We are all Mike Brown!” boomed across the subway terminal. The transit police remained at a safe distance, in a rare display of wisdom.

After the rain subsided, we marched back to our original rallying point at Love Park. With only a few dozen left after the spontaneous confusion and weather conditions, our comrades who we had originally split with arrived en masse into the park and both our crowds erupted in cheer.

A people’s assembly formed on the spot, with the youth taking center stage. Some spoke on behalf of those who had direct experience with police brutality and detailed the heart-wrenching loss that comes with this devastating reality. Others spoke of the need to avoid remaining static, and to readily adapt in order to persevere against the system that oppresses us. The most radical of all defiantly declared that they belonged to the generation that would see through the real revolutionary overhaul of this capitalist system and stressed taking immediate steps to organize.

Let it be clear: a people’s fight back movement is being organized more intensely at every attack by the capitalist class. We will not remain silent and idle as their oppression intensifies. Through unity, determination, and refinement of our methods, we will prevail. To the people of Ferguson and all of the world, Philly says: it is right to rebel!