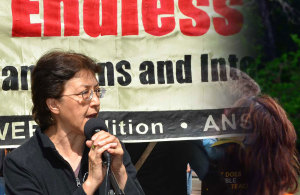 Important message from Gloria La Riva, the 2016 socialist presidential candidate of the Peace and Freedom Party, Liberty Union Party, and the Party for Socialism and Liberation.

Friends and fellow resisters, I am excited to let you know that I am now one of the Conveners of an exciting new campaign to fight back against the Trump agenda called the People’s Congress of Resistance.

Join the first-ever People’s Congress of Resistance in Washington, D.C., on September 16 and 17

On the day after the election of Trump, I was in the streets alongside our campaign supporters and hundreds of thousands of people across the country marching and chanting, “Trump says go back-we say fight back!” We had stated that while the campaign would end on November 8, our struggle would not, and we immediately began to organize and called building a new, united mass movement.

That is just what the People’s Congress of Resistance is proposing to do. I urge everyone to participate in this tremendous opportunity for the people’s struggle! The Congress will bring together resisters and people defending their communities representing many different movements and struggles across the country. We are working hard to bring activists and organizers from all 50 states.

The People’s Congress of Resistance has been endorsed by hundreds of organizations and activists including: opponents of deportations fighting for immigrant and refugee rights; Black Lives Matter chapters and families affected by police brutality; Native Americans organizing for self-determination; communities fighting pollution and climate change; nurses and patients advocating healthcare for all; workers striking for living wages and unions; women and LGBTQ people resisting attacks on their rights; and more.

You can learn more about the People’s Congress of Resistance by reading the Call to Action and Vision, checking out the Facebook page, and reading the message below.

We are asking everyone who supported our 2016 presidential campaign to register and attend the Congress in September. If you cannot attend yourself, please consider making a donation to help sponsor another activist to attend.

I am forwarding below an email from the People’s Congress of Resistance so you can learn more about it and share it with your networks!

The registration fees of $50 and $100 help cover the enormous expenses that go with organizing an event of this magnitude.

Space will be limited, make your plans today — click this link to register today!

The registration fee covers participation in the two-day event, not including housing, food and other personal expenses.

If you cannot pay the registration fee but are eager to attend the People’s Congress of Resistance, please fill out this form. We are collectively fundraising so that no one will be unable to come on account of funds.