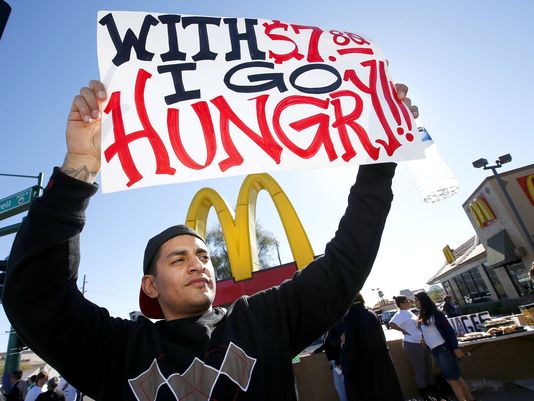 Let’s take a look at a couple facts … just a few.

Our little facts of the day show something that every workers knows from experience. Someone is making big bucks and it isn’t the workers who are doing all the real down and dirty actual productive work.

Some more info… just cause we need it. When researchers at the Labor Research Center at University of California Berkeley and UC Davis professor Chris Benner interviewed 925 grocery workers they found that “workers who sell food in California are almost twice as likely as the general population to not be able to afford to eat the food they sell.”

What a nefarious contradiction! The workers who produce and distribute food–which is a pretty universally agreed upon necessity–can’t afford to eat. One young Walmart worker, Joanna Lopez, recently featured in a SF Chronicle article, said “”I try not to cut back on food for my kids. If I have to, I let the phone get cut off. Or I don’t put gas in my car.” She works in the grocery sections, selling food at Walmart (wait just one second for the real kicker in this one) and she cannot afford to pay for her children to eat and the gas she needs to get to work to sell food, among other commodities.

Walmart, the same place that pays Joanna so little she can’t afford basic needs, has 3 percent of the grocery business cornered. It pays its workers a pittance so where does all that money go they make from selling so many products? One place is into the pockets of the Walton family, one of the richest families in the world. They eat. They eat really really well. Why?

Not because they do any real productive work. Nope. But because they own things, and not just any things, they own the corporation that pays workers nothing so owners, bankers and investors can live like royalty.

All our little facts now point in one very important direction. No one living in a place of such great resources and incredible productivity should have to ask her (or his) self what necessitiy they can live without so they can afford to feed their children or their parents or themselves. So when low-wage workers take to the streets and hold actions calling for a $15 wage or a living wage, we should all be there.

Nathalie Hrizi is a founding member of the Party for Socialism and Liberation and an organizer with WORD [Women Organized to Resist and Defend]. She is a public school teacher in San Francisco.