Harvard graduate workers on strike after university stalls in negotiations 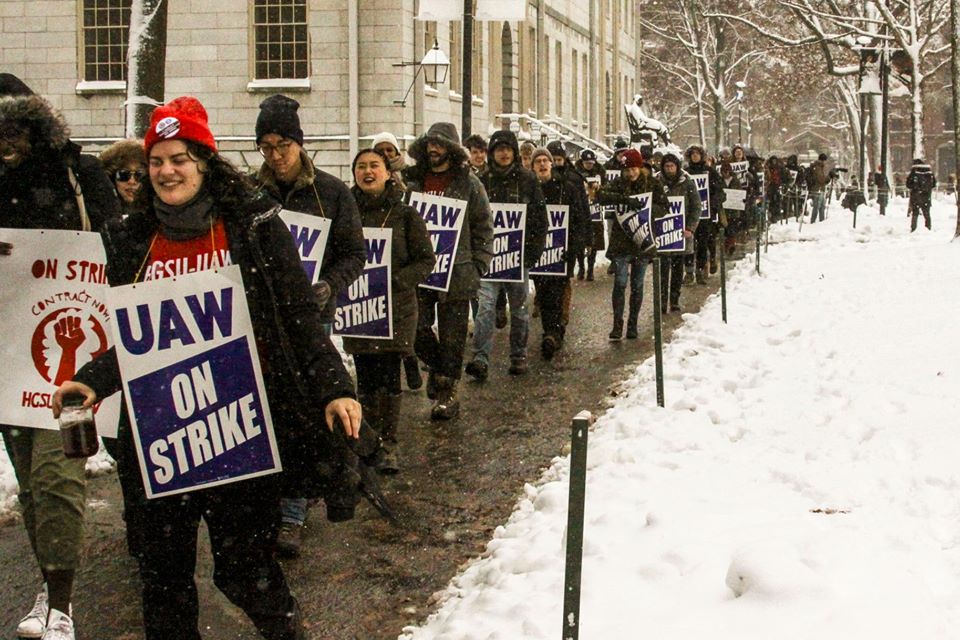 On Dec. 3, 4,000 Harvard University graduate workers went on strike in Cambridge, Mass., delivering a strong message to the richest and most powerful university on the planet: we are the union, mighty mighty union!

Researchers, teaching assistants, and their allies marched in a half-mile-long column encircling Harvard Yard in subzero temperatures, shouting out their demands for a union grievance procedure to resolve sexual harassment complaints and for improvements in health insurance and wages. Their union, HGSU/UAW, has been fighting for a first contract for over a year, yet in recent months the university has only been willing to bargain with workers a total of 10 hours. Meanwhile, Harvard’s $41 billion endowment fund grows larger every day off the labor of underpaid grad workers struggling to make ends meet in a metro area with the highest median rents of any city in the United States.

Carrie Barbash, president of the Harvard AFSCME clerical workers, told a cheering rally of workers that union clerical staff would refuse to cover the work of strikers. At a solidarity march the next day, more labor leaders came out to pledge their support, including Jessica Tang, president of the Boston Teachers Union, Steve Tolman, president of the Massachusetts AFL-CIO, Darlene Lombos, incoming president of the Greater Boston Labor Council, and Merrie Najimi, who leads the 100,000-strong Massachusetts Teachers Association. Najimi electrified the crowd when she got up to speak: “There is a strike wave rolling over this country that has reached the shore of Massachusetts! The source of our power is when we withhold our labor!”

Ed Childs, longtime chief shop steward for UNITE/HERE Local 26 dining hall workers at Harvard, also took the microphone: “In 1989, Harvard told us that gay rights would never be allowed on campus and we struck. Harvard said only dining hall workers would get this right and nobody else on campus. Dining hall workers are the most vulnerable workers on campus but since we got sexual harassment language in our contract in 1989, we have had fewer sexual harassment complaints in all those years than you have in one semester! You are going to break down this sexist homophobic and racist culture at Harvard!”

Over 20,000 other grad workers in the Boston area are also organizing around the same issues at other universities, including Northeastern University, Boston University and Boston College. To have so many workers organizing within the same industry in a relatively small metro area is historic, and the grad workers’ efforts are occurring within the broader context of the biggest worker upsurge in Massachusetts in decades. In the Metro Boston area, unions have recently won big strike victories against the Marriott Hotel chain and Stop & Shop grocery stores. This worker upsurge has been characterized by high levels of solidarity across worksites and industries.

Other groups organizing pickets and support for the strike include Harvard SLAM (Student Labor Action Movement), the Harvard No Layoffs Campaign and Eastern Massachusetts Pride at Work, the LGBTQ constituency group of the AFL-CIO.