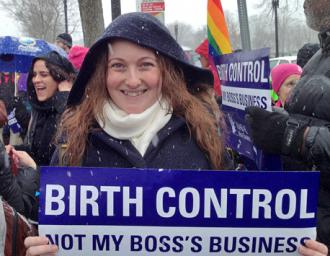 Heads up, ladies! If you are a woman who might need to make sure you don’t get pregnant (for whatever reason) check on the business owners’ religious beliefs. Because apparently those trump your decisions about YOUR body! At least the Supreme Court decision in Burwell v. Hobby  obby says so.

But not really, right… because you can just pay for  ontraception out of your own pocket. That’s sheer ridiculousness. I know this is pretty obvious but none of the five male justices who wrote the majority decision have ever worked at a place like Hobby Lobby and then tried paying for one of the most dependable forms of contraception out there, an intra-uterine device (IUD). That medical procedure can cost a whole month’s wages or more!

We don’t have a universal public healthcare system. The best this system could offer us was a reform requiring us to buy PRIVATE health insurance. So many people depend on healthcare through their jobs. And now the Supreme Court has decreed that a corporation’s owners’ unscientific religious beliefs are more important than a female workers’ health and reproductive needs.

The right-wing anti-woman bigots (which can now be clearly expanded to include members of the U.S. Supreme Court) get all bent out of shape about abortion, contraception and women’s right to healthcare. But I don’t see them carrying signs calling for maternity and paternity leave, universal childcare or preschool or healthcare for all. That’s because these attacks aren’t based in any real consideration for women’s or children’s health and wellbeing.

Luckily, they aren’t. The Supreme Court made a despicable decision that is in reality part of a full-scale attack on women’s rights built through TRAP laws denying abortion providers the right to operate and innumerous state and federal legislative attacks on reproductive rights. But women can fight back and stop the attacks. We have done it before and we can do it again.

Women have won innumerable gains in the struggle towards full equality because of our strength in organizing ourselves in the streets, workplaces, schools and homes. We have been part of every major movement—for civil rights, for immigrant rights, against war and more. In regards to reproductive rights, the militant women’s movement of the 1970s was a MAJOR factor in forcing the Supreme Court to give women the right to abortion in the Roe v Wade decision. We have done it before and we must do it again.

Nathalie Hrizi is a founding member of the Party for Socialism and Liberation and an organizer with WORD [Women Organized to Resist and Defend]. She is a public school teacher in San Francisco.