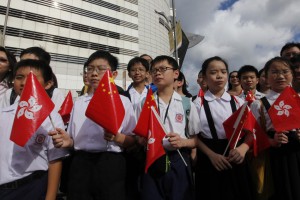 The protests in Hong Kong have subsided Monday as negotiations continue between the opposition movement and the local government. There are unconfirmed reports of the basic framework of an agreement, details of which have not yet been released.

Discussions are continuing on the basis that the police will not forcefully break up the protesters’ encampments and the protesters will in turn reopen the streets they had blocked.

Over the last week, the corporate-owned media, and imperialist governments, have expressed their support for the opposition movement, which they described simply as “pro-democracy.”

Their hypocrisy cannot be starker.

The Occupy Wall Street movement — after which Hong Kong’s “Occupy Central” was named — was repressed with mass and targeted arrests, numbering in the thousands. That movement’s encampments in public parks were permanently broken up in the matter of weeks and months in the name of “public safety” and “order.”

These same media outlets and governments are now reporting favorably on protesters who have threatened to take over government buildings and shut down the city of Hong Kong.

What accounts for their praise for the Hong Kong demonstrations and sharp criticism of the Chinese government’s response?

It is part of the ongoing campaign aimed at forcing China to “open up” its political system. The Western ruling classes consider the break-up of the political monopoly of the Chinese Communist Party as a long-term strategic objective that would usher in the unrestrained domination of U.S. corporations and militarism in the region.

Regardless of what interruptions such “liberalizing” reform in China would bring to current Western profits and international finance in the short- or medium-term, in the long-term it would amount to a conquest equal to the overthrow of the Soviet bloc.

The colonial history of China and Hong Kong

The struggle over political reform in Hong Kong is bound up with the area’s history as a colonial subject of Britain. While in form, the present struggle is over electoral regulations and standards, its content is over the terms of Hong Kong’s reintegration into China, and how that process will unfold.

Hong Kong was stolen from China during the opium war of 1839-1842, when Great Britain sought to punish China for denying it the right to import opium, reaping massive drug profits. Until 1997, the British Crown ruled Hong Kong with an iron fist. In the first 153 years of colonial rule, the British refused to allow any general election. London had always appointed a white British aristocrat to be governor of this colony that was 98 percent Chinese. This governor had absolute power. Britain only devised an “electoral” game in 1994 as they were about to leave. Now, the British and other imperialists are talking about a grievous crime committed against democracy in Hong Kong.

A chief task of the Chinese Revolution was integrating into a unitary nation-state its disparate regions, which had been carved up by imperialist division into spheres of influence, and by feudal lords and warlordism. Hong Kong was not part of this process because British colonialism held onto it, and the West intentionally built it as a central hub of finance capital and hyper-capitalism on China’s borders.

At any time the Peoples’ Liberation Army could have gone in and seized Hong Kong, their stolen territory. The Chinese government was not required to negotiate with British imperialism, which should have been paying them reparations. Instead, the Peoples’ Republic of China sought a peaceful and legal solution.

Instead of the reintegration of Hong Kong on a revolutionary basis or through military force, it happened on the legal and peaceful basis of the “One Country, Two Systems” formula and the subsequent Basic Law.

Since 1997, China has further opened its market to foreign corporations and internal class divisions have sharpened. In this way, China became more like Hong Kong and more integrated with it as a primary circuit of finance and trade between China and the West. But Hong Kong also had its own class and political formations, distinct government institutions, and ideological influences as a result of its role as a center of global finance capital and its 153 preceding years as a comprador outpost of British rule. These have not gone away.

Nearly all political movements in the present era legitimate their own cause with the abstract slogan of democracy. To truly understand a movement and its trajectory, we must ask what social sectors are demanding more power and to what end.

The large protests taking place now in Hong Kong reflect the fact that Hong Kong has become polarized between those supportive of the Peoples’ Republic of China and those mobilizing in opposition to it. There have, in fact, been dueling protests with pro-Beijing forces also mobilizing large numbers in opposition to Occupy Central earlier this year.

Although the opposition movement claims that its struggle for greater autonomy will automatically improve the notoriously terrible conditions of poor and working-class people in Hong Kong, it is a movement based in Hong Kong’s middle and upper-middle classes.

The U.S. State Department has been heavily involved behind-the-scenes in the “civil society” opposition trends within China including Hong Kong’s “pan-democratic” movement. Western-oriented liberal groups are clearly leading the Hong Kong opposition movement and their most significant challengers inside the movement come from the growing far-right anti-PRC trend.

China has, since the transfer of Hong Kong, attempted to closely manage its integration, which was laid out as a 50-year and gradual process. This is understandable given the divergent political and social formation that Hong Kong represented. The current struggle is not about democracy in the abstract, but over the terms of this process.

China’s National People’s Congress has over time taken up the question of introducing broader suffrage into Hong Kong politics. Under the Basic Law, it was not required to give a precise timeline for such changes and it has revised the expected timeline on a few occasions. Most recently, it outlined a plan for the 2017 election for Chief Executive in accordance with the Basic Law. For the first time in Hong Kong’s history, the proposal provides for the top governing official of the city-state to be elected via a one-person, one-vote system. The candidates for this position must still be pre-approved by a nominating commission, and this is the stipulation that the Hong Kong opposition movement is currently fighting.

While being projected by the capitalist media as out-of-control tyranny, it is worth noting that this system is far more democratic than what existed under British rule, where the leaders were simply appointed. The British and U.S. governments presently back up open monarchies all over the world — recently trotting out several of them as “regional representatives” in the bombing of the Islamic State in Syria.

Moreover, the proposed system is not entirely inconsistent with the practice of bourgeois democracy in many places around the world. The United States has an Electoral College. In Britain, the Prime Minister is not directly elected. In many Western European countries there are “party-list” systems, where voters choose parties rather than individuals. Smaller bodies within each party selects — or “pre-approves” — the candidates, without being accountable to voters.

Given its own particular history as a hub of Western colonialism and finance capital, and taking note of the present global situation, including the “Asia Pivot,” no movement in Hong Kong that feeds on anti-mainlander sentiment or seeks greater autonomy from China can develop in a progressive direction. Any Hong Kong movement that seeks “democracy” for the purposes of greater autonomy or independence can, under the present circumstances, only develop in the direction of Western imperialism.

A progressive movement in Hong Kong would emphasize the criminal division of China by British imperialism and, on the basis of unity with China, fight for the social and class interests of the working class in both mainland China and Hong Kong.