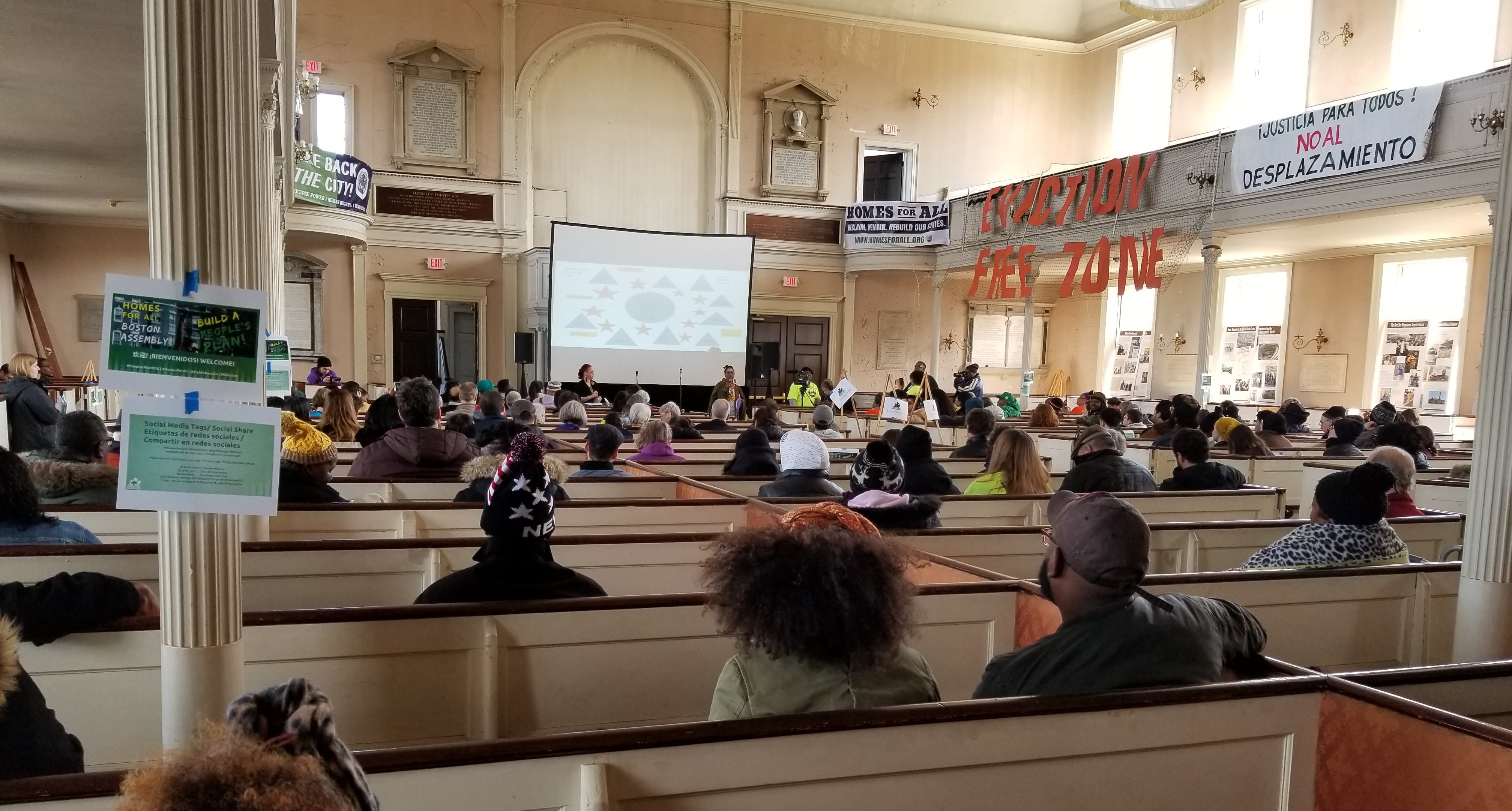 On March 23, more than 200 activists, housing organizations and community members came together for the first Boston Housing Assembly of 2019. During the four assemblies scheduled for 2019 people from all over Boston will compile a People’s Plan for the future of housing in Boston. The goal of this plan is ending displacement in Boston and securing the many threatened neighborhoods around the city.

The First Church of Roxbury was filled with attendees from Dorchester, Roxbury, Jamaica Plain, Mattapan, Chinatown, East Boston and Fenway. The various struggles in each neighborhood were well represented, and all were unified in the fight to protect and preserve the city for working class Bostonians. Many groups, including City Life/Vida Urbana, Right to the City, Dorchester Not for Sale, Chinatown Community Land Trust, and Reclaim Roxbury, all spoke about the fights in their neighborhoods and the need for collective action around the connected challenges faced by all working class neighborhoods. During the presentations, organizers from Dorchester Not for Sale led a chant of “one struggle, one fight! Housing is a human right!”

Like many cities around the country, Boston is in the throes of a housing crisis that the capitalist establishment has no answers for. Over 60 percent of Bostonians are renters, and of those, half are forced to spend more than 30 percent of their income on rent, while a quarter pay 50 percent or more. Communities of color are vastly over-represented in the numbers of “rent burdened” and “severely rent burdened” households. Homelessness in Massachusetts has increased by 14 percent in the last year compared to a 0.3 percent increase nationally. Dustin, an organizer with the Massachusetts Union of the Homeless, shared with Liberation News, “if they continue to leave the homeless in shelters not only will we have a large amount of wasted tax dollars, we will have a large group of people that could have stood on their own two feet now too institutionalized for everyday life.”

The Housing Assembly targeted three main areas for it’s plan: affordable housing, collective governance and anti-displacement zones. These three areas are designed to work together to give communities control of development and prevent displacement. After outlining these three aspects, the Assembly separated into break-out groups organized by neighborhood to discuss proposals in each area. The demands for elected community boards, veto power over development projects, recall of corrupt elected officials and 50 percent rate of affordability based on the average income of the neighborhood were all raised. The next Housing Assembly will meet on June 9 to continue the work of putting together a housing plan that will truly serve the people of Boston.

The oppressed communities of Boston are all threatened as the capitalist housing market destroys the lives of working class people. In response, we must come together to fight for housing for all.