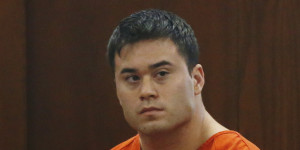 Many are following the case of Daniel Holtzclaw, the police officer who viciously sexually assaulted at least 13 Black women. Some of the abhorrent victim-blaming that has surfaced is a result of racism, rape culture and the inherent trust many people are taught to have towards police. In the face of this extremely public case, we need to look at the facts of police behavior.

In 2007, a steady rise in complaints about sexual assaults committed by police officers prompted a series of federally funded trainings on sexual abuse within departments. Whether those were successful is history. It’s 2015 now, and there is still no centralized form of tracking police sexual misconduct nationally. The Federal Bureau of Justice Statistics (an agency that collects police-related data) does not track arrests of officers or require states to know or share how many officers are arrested and why.

Independent research by the AP drew on 2009-14 records from 41 states, focusing on cops whose licenses were revoked. Nine states and DC either refused to provide information or stated that they did not decertify officers for misconduct. The records that were made available revealed that approximately 550 officers lost their licenses for sexual assault. Their actions included rape, forcing victims to perform sexual acts to avoid arrest and pat-downs involving assault. Approximately 440 officers committed still other crimes, such as possession of child pornography, non-consensual voyeurism and sexual harassment of children.

Most vulnerable people at risk

About a third of the cases revealed abuse of children. These statistics did not take into consideration actions by any federal officers. The most common victims of these cops, according to the study, are pulled-over motorists, children apprehended while in school, police interns, women with legal challenges and prison inmates (who are assaulted by guards).

Multiple studies conducted over the past few years show that sexual abuse is second only to excessive force when it comes to abuses perpetrated by police and reported by civilians. Multiple horrific cases illustrate this.

This year, Trumbull, Ct. police officer William Ruscoe began serving 30 months in prison for stalking and harassing a teenager before forcing her into his house, handcuffing her and forcing her to make sexual contact with him.

In Florida, officer Jonathan Bleiweiss was convicted of raping at least 20 immigrant men, forcing them to comply by threatening them with deportation.

The overarching trend with these assaults is clearly that cops tend to take advantage of people who are either left with no choice but to comply, are children and/or respect and admire the criminal justice system and look to police as trustworthy authority figures. The number of people who have reported harassment and assault in surveys leaves no question as to how pervasive this abuse is. Like racist violence, sexual abuse by agents of a violent, abusive state is not the doing of a few “bad apples” – it is a systemic evil embedded in the criminal justice system.

A majority of sexual assaults in general do not get reported to police. This happens for a variety of reasons, ranging from fear of retaliation to lack of “proof,” but a common theme that arises among survivors, especially poor people, people of color and trans people, is a fear that police will abuse them further if they try to look to them for help. With this fact in mind, how many assaults committed by police officers go unreported? The Bureau of Justice Statistics estimates that only approximately 26 percent of sexual assaults are reported in general. Assaults committed by officers are much less likely to be reported than assaults by civilians. This means that the horrific statistics revealed by the AP study — which include only officers who were reported and lost their licenses — are only the tip of the iceberg.

Abuse as a trend

Multiple studies have shown that police officers tend to commit not only sexual assault on the job, but also domestic violence at home. Two studies focused on domestic violence have found that at least 40 percent of families of police officers experience domestic violence. This is in contrast with a 10 percent average for the civilian population. Like in the cases of abuse of people who are not family members, abused spouses, children and other family members of police officers are highly unlikely to report their abuse. They are starkly aware of the fact that their cases will likely be handled by people who know them and their abusers personally, and will have a bias in favor of the abuser.

The statistics agree with their assumptions: for example, the San Diego police department prosecutes 92 percent of domestic violence cases they are faced with, but that figure drops to 42 percent when it involves a police officer as the perpetrator. Other studies show that officers’ careers are almost guaranteed to remain unscathed if they are accused of domestic violence. A Los Angeles study showed that in 75 percent of cases of violent police officers, the domestic violence abuses reported was not included in their performance evaluations.

Attempts at curbing violent police officers have been largely unsuccessful. For example, a 1996 bill preventing officers convicted of a misdemeanor domestic violence offense from owning a weapon, while substantial in theory, was easily circumvented by lack of avenues to report open cases against cops and an increase in survivor intimidation by cops whose guns and jobs were at stake.

These ugly truths show that survivors of abuse, sexual assault and domestic violence are, statistically, right not to trust police. These revelations only further stress the urgency of communities organizing together to protect and empower survivors, stand up to abusive cops and fight back to smash a system that enables and rewards rape culture.