Idaho rallies against war at “No Wars, No Walls” speakout 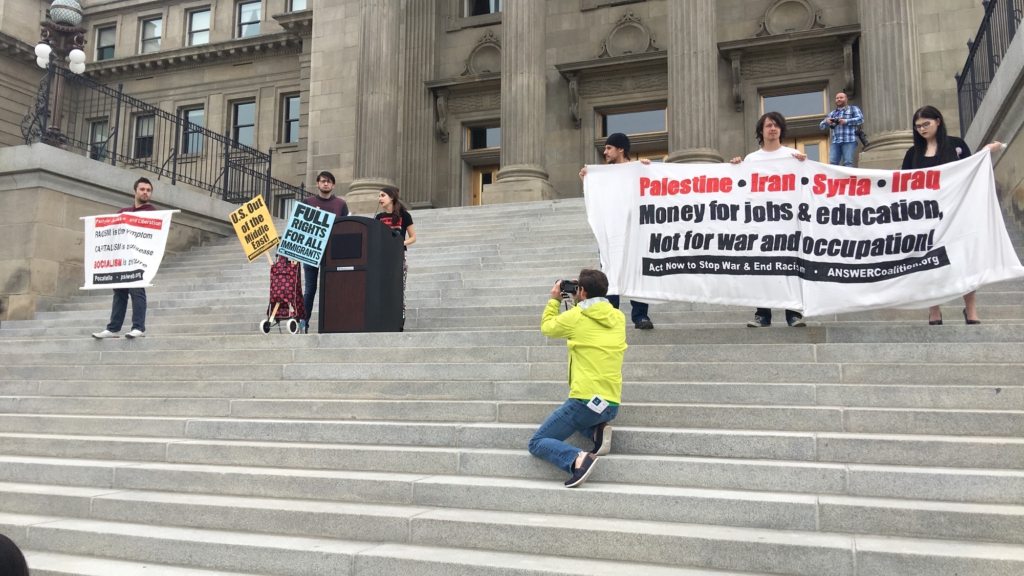 On May 12, dozens of people gathered at the capitol steps in Boise, Idaho, calling for an end to U.S. war and imperialism. The speakout event was organized by the ANSWER Coalition, and speakers included high school youth activists, an immigration rights activist from PODER, an environmental lawyer, the director of the Idaho Green Party, as well as local members of ANSWER and the Party for Socialism and Liberation.

Immigrants rights activist and community organizer Estefania Mondragon connected the current wars waged by the United States to the roots of colonialism and the violence continued against indigenous people. Mondragon is the Bilingual Social Change Organizer at the Idaho Coalition against Sexual and Domestic Violence, as well as a community organizer with PODER of Idaho, and spoke of the need to build grassroots power. 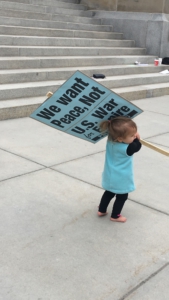 Youth activist McNay volunteers with Planned Parenthood and the Idaho Coalition against Sexual and Domestic Violence. They helped organize the recent student walkouts, including March for Our Lives and the Women’s March. McNay spoke of the need to stand against racist, colonial, imperialist and capitalist ambitions of the U.S. “I’ve learned that it’s so important that we all use our voices and actions to show the U.S. that what it’s done is inexcusable and needs to change,” they said, whether that was through racist immigration reform, supporting the Israeli genocide of the Palestinian people, bombing Syria or other atrocities.”

Hypocrisy lies at the basis of U.S. actions, McNay recounted. “The U.S. values power and capitalism more than they will ever value lives, especially Muslim people of Color. The U.S. cloaks their imperialism and colonialism in a golden jacket of a white savior complex,” while only bringing devastation to the people.

The government has intervened on the grounds of “humanitarian reasons” in Vietnam, the Korean peninsula, Cuba, Libya, Iran, Iraq, Palestine and many countries, McNay said, only to continue their imperialism.

Boise resident Austin Negaard-Walters spoke about his family’s history in the military, with both his mother and grandfather joining the military. The United States abandons its veterans as soon as their contracts have ended, while at the same time ramping up killings across the world. “An obscene amount of money is spent on the military,” he said. “The entire world’s defense budget is $1.7 trillion. Officially the U.S. budget is $700 billion, but the real number is much higher than that when you factor in the CIA and other covert operations. So one country accounts for more than half of the world’s war spending.”

The killings have also increased over the years. “Obama dropped 26,000 bombs in 2016, and Trump has increased that number,” Negaard-Walters continued. “They used to pretend not to kill civilians, but now Trump has given the military the green light to kill anyone they want. They are supporting Saudi Arabia’s genocidal war against Yemen, which now has the worst cholera outbreak in at least 100 years, with more than 500,000 people not having water or food.”

Those who attended the event generally responded very favorably and were happy that anti-war organizing had come to Idaho, and were looking forward to future events. One local who came to the speakout, Willie, when asked about why he came to the event responded, “I don’t want to go to war. Nobody does except capitalists.”

When asked why they opposed U.S military intervention and war, local activists who attended the event responded in different ways. One local high school activist Fanisee, responded that she hates having violence prioritized over human rights: “As a young person, I don’t want money going into violence and war.”

Another local high school activist who spoke at the event, Monique, had organized student walkouts including the recent March for Our Lives and volunteers with the Idaho Coalition against Sexual and Domestic Violence. Monique spoke about her experience as a refugee of U.S. imperialism and war. Her family comes from Laos, which was bombed extensively during the U.S. war against Vietnam. The bombing was so extreme that Laos is estimated to be the most bombed country on the planet.

Refugees who then come to the United States experience racism, Monique explained. “As a community we must actively combat the violence committed against us. Police and law enforcement do not believe in our humanity; they see us as intruders and aliens. We need to combat this and as a community we need to support immigrants and refugees.”

When asked after the event why she opposed U.S. military intervention and war, Monique spoke of the ties to imperialism and colonialism, the attacks on communities of color worldwide, and spoke more of her family’s experience as war refugees.

Environmental activist, lawyer, and 2016 Bernie Sanders delegate Brian Ertz spoke about the devastation of public lands in the state, as well as the mass slaughter of wolves. “The way that we relate to the natural world is much the way that we relate to each other. We live in Idaho, one of the most profound wild places in the world left, and we treat it like a war zone. Right now hundreds of thousands, if not millions, of acres are being churned up, as if subject to war. We view the natural world as an enemy.”

“It’s not an uncommon thing,” Ertz continued, “the paradigm of militarism, the way we subject each other and other living things to war is unjust and cruel, and needs to end. There are giant bombing ranges all over what used to be the wild country of Idaho.” These bombing ranges, he explained, are not just for American troops, but also leased on contract to other nations to use the wild lands to train their troops as to how to kill each other all over the world.

In fact, there have been a number of proposals to expand bombing ranges and militarism, including an egregious plan to use Boise and the surrounding areas for “urban warfare training” for F-15 fighter jets.

Michelle Doty of the Party for Socialism and Liberation spoke about how the struggle against war and militarism ties in with every other individual struggle: from immigrants’ rights to environmental rights to queer liberation, a struggle that Doty is personally involved in.

“In fact, the ties between queer liberation and the anti-war movement not new,” Doty said. “Several decades ago, Marshall B. Johnson and Silvia Rivera formed the Gay Liberation Front, an organization named after the Vietnamese National Liberation Front.”

“The Gay Liberation Front would go on to organize alongside the Black Panther Party and other anti-war organizations,” she said. “United struggle is not new because the forces that drive these same struggles come from the same places.” The same people who oppress us, Doty explained, are the same people who profit from that oppression.

One local reporter covering the action noted about current Idaho conservative politics, “someone wearing a Karl Marx T-shirt would be a more startling sight in public than someone with a pistol on the waist.”

This is not to say that Idahoans have some innate tendency to be conservative. One important step that is absolutely vital to increase working-class militancy is organizing anti-war events such as this speakout.

A central theme of the event was the connection between the war abroad on the people of the world, and the war on workers at home. Imperialism is the highest stage of capitalism, and its violence and destruction must be battled in any fight against capitalism. What is necessary is more working-class organizing and militancy of our own to fight the reactionary tide, and make the red states truly red. No wars, no walls!