By Lisa Crane and Joel Gallegos 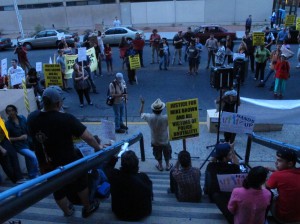 A crowd of 100 protesters occupied the street in front of the Albuquerque Police Department on the evening of August 14, demonstrating solidarity with the protesters in Ferguson, Mo., where an unarmed 18 year old Black youth named Michael Brown was recently murdered by police.

One of the Albuquerque protesters was Isaac Mitchell, father of Jonathan Mitchell, a 23-year-old Black man and Iraq war veteran who, like Trayvon Martin in Florida, died after being shot by a neighborhood vigilante. Despite Albuquerque police helicopter video showing the vigilante’s black SUV circling the block stalking Jonathan, the district attorney declared the 2013 shooting justified and no charges have been filed. The family has filed a federal complaint with the Department of Justice. 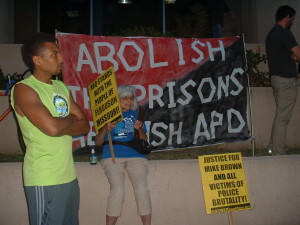 Jonathan was shot in his own driveway while he was out looking for his friend, an Afghanistan war veteran, who was having an episode. Jonathan wanted to find the friend and bring him into the house. A neighborhood vigilante driving a black SUV stalked Jonathan and shot him in the shoulder. Jonathan’s brother, Benjamin, was administering CPR and working desperately to control the bleeding when police arrived.

Their father Isaac tells what happened next: “Benjamin was trying to give Jonathan CPR. The SWAT team said, “Hands up!” and they pulled him off Jonathan. They didn’t give Jonathan any aid. They handcuffed Benjamin. Benjamin was handcuffed for seven hours. He was placed in a jail cell for another seven hours. Never charged with anything, he had broken his wrist trying to help Jonathan get over the wall [between yards]. ” 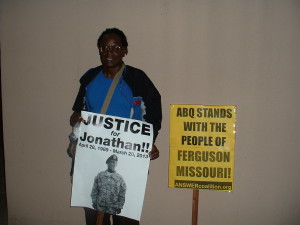 Every instance of the murder of a citizen by police is an act of violence on the victim’s entire family. The violence permanently alters their lives. “My wife is beside herself,” said Isaac. “She can’t live in Albuquerque anymore. She’s living with her son in Florida. Benjamin is horrified. He was covered with blood. Benjamin has been scarred for life. I have a broken heart. Sometimes I’m just sitting, and tears will start to flow from my eyes, and I don’t realize I’m crying.”

Protest and rebellion are rightfully continuing in Ferguson. If you want people to stop expressing their outrage, then you need to fight to stop the outrages. Focusing on whether or not it was right to break windows misses the whole point. Why were they broken in the first place? Isaac Mitchell believes we must investigate the root causes of the police brutality problem. He says, “The root causes for the Black man are the legacy of slavery, the high incarceration rate of Black men, and the way the justice system looks at Black men as thugs.” His son Jonathan has been portrayed by the media and police as a thug even though he had never been arrested,
never even had a parking ticket.

We are all taught early on about how our country fought for its freedom in a revolution. But when it is the poor and working class people, particularly people of color, who are out in the streets fighting for freedom from police brutality, that’s not considered legitimate. It’s not a legitimate form of fighting. But 200 years ago when the fight was waged by wealthy land owning and slave owning white males, it was a legitimate struggle. However, when poor people, people of color and working people begin to rise up, the media and politicians say, “Slow down. Be calm.” They waste no time demonizing our brothers and sisters.

This is not the time to stop fighting back. The task of the moment is to fight back with increasing levels of organization and coordination. The state is highly organized and centralized. It is deploying military tactics—from the federal government down to the local police—to defeat the people’s uprising. It has trained and prepared its personnel for scenarios like this. While the people do not yet have equally strong organizations, every night they are learning, and learning fast. how to fight more effectively, how to differentiate friend from foe, and the lessons for tomorrow’s struggles.