Last weekend, youth from La Pastora organized a day of cultural events “against the gringo intervention,” including painting, storytelling, puppets, screenprinting, capoeira, and muralists from the [email protected] collective creating a graffiti-mural in real-time of the neighborhood’s Indigenous history.

The event took place at a newly-opened youth and cultural center named after Robert Serra, the revolutionary leader and youngest member of the National Assembly who was murdered in the neighborhood last year.

Meanwhile, in Barlovento – a primarily Afro-Venezuelan region along the coast – Afro-Venezuelan youth and elders have been busily mounting a TV station, AFRO TV, to promote community issues, dissimulate culture, and challenge the whitewashed racism and narrow perspective of existing television programming in a region with tremendous cultural, historical, and political significance that lacks representation in traditional media.

“Since the moment our ancestors arrived, they freed themselves and became maroons, and we continue in that line of struggle. This is a revolutionary TV station, as part of this revolutionary process but with our own language, to reclaim those struggles of our ancestors, African men and women, here in Barlovento.

“Like the case of the maroon Guillermo Ribas in Mango de Ocoyta or the case of the cumbe founded by the maroon Miguel Geronimo Guacamaya, that’s where we take off from as a reference of struggle to continue, against any kinds of attitude that wants to oppress us. We want to continue in that through this TV channel.”

Nationwide, since January, the Ministry of Culture has launched a new initiative to support emerging movements, including graffiti artists and muralists, graphic designers, tattoo artists, rappers and DJs, breakdancers and street performers. Gsus García, an artist and activist also from La Pastora has been one of the youth leaders of this process.

“This is something new in the country. The Venezuelan Ministry of Culture had always been a little straightlaced about what they considered culture. Now, the Ministry of Culture is opening up the space for cultural expressions that had always been deemed ‘vandalistic’ or ‘bad’ or ‘gangster,’ to meet and to participate in the culture of the country. And I think that’s excellent. And it’s something that’s only possible with a government like this one, with a revolutionary government.” 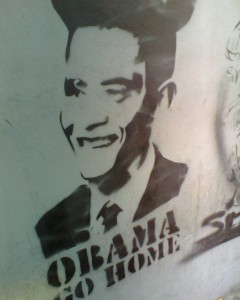 Since President Obama announced his Executive Order, Venezuelans have organized regular marches against a potential invasion, collected over 13 million petition signatures, and continued to use arts and culture against potential U.S. interference.

A photographer, revolutionary, and one of the main organizers of the event in La Pastora, Milangela Galea told Liberation News:

“While it’s not something positive, (the Executive Order) has helped the country wake up a lot – even the opposition is campaigning for the repeal of the Executive Order. I think that Venezuela right now is even more in love with their country. We’re conscious that we’re not a threat to anybody. Every day we’re creating, mounting activities here in Venezuela. We’re not a threat to anybody, and I think it’s not necessary for Obama to come here because he doesn’t have anything to do with us.”

“We know that, historically, this hasn’t happened only in Venezuela but also in other countries in Latin America. They’ve promoted scenarios like this one for a coup, so we use our tools to carry that knowledge to our comrades so they don’t let themselves get fooled. Major media, very unfortunately, don’t support us. We incline ourselves towards alternative media, like (Liberation News).

Here, we have alternative radio, newspapers, culture, and we use that to make all of our comrades see that, really, this isn’t a coincidence. Because with all their efforts, with all their strength, with all the strategic plans that they’ve mounted, they’re betting that this government will fall. But it’s going to flip, as they say, the tortilla. Because, here, in this space, in our trench, we’re putting up a fight so that the people will continue being the ones in power in this country.”