Negotiations over the revival of the Iran nuclear deal are being held up after becoming entangled with the suffocating sanctions regime imposed by the United States on Russia. Last week, Russian Foreign Minister Sergei Lavrov commented that any deal with Iran would be unacceptable if it forced Iran to abide by these sanctions and prevented Iran from carrying out military and economic cooperation with Russia. The steady but slow progress of the talks has now stalled completely with European Union foreign policy head Josep Borrell commenting that the talks were “on pause” due to “external factors.”

Iran has consistently repeated its desire for an agreement that respects the country’s domestic and international red lines. Iran’s Foreign Minister Hossein Amir-Abdollahian called on the United States to “stop playing with text and time,” and to bring the talks to a mutually beneficial conclusion. The nuclear deal, known as the Joint Comprehensive Plan of Action, was scuttled when then-president Donald Trump unilaterally and illegally withdrew the United States from the agreement in 2018 and imposed harsh sanctions that damaged Iran’s economy.

Talks in Vienna have been ongoing for the past 10 months. Despite the significant progress made over the eight rounds of talks between Iran, Russia, China, Germany, France, and the UK, it is U.S. intransigence and indecision that is blocking a conclusion. The United States, one of the original signatories of the JCPOA, is technically absent from the current talks, but is engaging in shuttle diplomacy through its European allies.

Trade between Iran and Russia increased by 41% in 2021 to stand at around $4 billion annually, demonstrating a trend towards growing economic ties between the two countries. Iran is becoming a major market for Russian agricultural products. A member of the Shanghai Cooperation Organization, Iran has conducted three joint maritime drills with Russia and China since 2019, with the most recent taking place in January.

The U.S. government trashes the deal

Since the 1979 overthrow of the country’s U.S.-backed puppet dictator, Iran has been a main target of the United States for regime change. For decades, the U.S. government has supported aggression of all kinds against Iran. Recent examples include the assassination of General Qasem Soleimani while on a diplomatic mission, support for an Israeli murder campaign against Iranian scientists, and implementing a deadly sanctions policy while Iran struggled with the COVID-19 pandemic.

But during the Obama administration, the imperialist establishment took a different approach — while still retaining their fundamental hostility towards the country. They sought to turn the temperature down on U.S.-Iran sanctions to facilitate a tactical retreat of U.S. imperialism from the Middle East. This, the Obama administration hoped, would allow the United States to more fully focus on carrying out its “Pivot to Asia” targeting China. The resulting agreement was the Joint Comprehensive Plan of Action, in which Iran accepted an invasive inspections regime in return for sanctions relief.

Trump’s withdrawal from the JCPOA and subsequent imposition of “maximum pressure” sanctions was yet another example of dishonesty and back-stabbing. But instead of simply rejoining the agreement as originally negotiated and revoking the sanctions, the Biden administration attempted to force Iran to accept new stipulations. Prior to the recent demands that Iran cut its economic and military ties with Russia, the two major sticking points of the agreement were the timing of U.S. sanctions removal and legal enforcement mechanisms to prevent the United States from reversing its position and withdrawing again.

The lack of diplomatic progress over the past year has pushed Iran to start enriching its uranium at higher levels in retaliation. Iran has asked that U.S. sanctions be removed before returning to compliance with the JCPOA. The United States’ insistence that Iran bring itself back into compliance before lifting sanctions is tantamount to asking Iran to surrender its sovereignty and accept U.S. demands without any reciprocal action from the United States.

U.S. domestic politics is making a deal difficult between the two sides. Over 30 Republican senators released a letter last month saying they will oppose any move to re-enter the JCPOA, and many Democrats oppose the deal as well. Domestic pressure from the right wing makes Biden hesitant to appear “soft on Iran.” And indeed Biden has continued to carry out provocative actions, like the seizure of two vessels on Thursday carrying $38 million worth of Iranian oil — an illegal act of piracy.

The Iranian people have the right to live in peace and self determination. It is not up to the U.S. government to dictate the policies of other countries. The only route forward for peace is for the United States to respect Iran’s legitimate security concerns, end unilateral and illegal sanctions, and immediately re-enter the JCPOA. 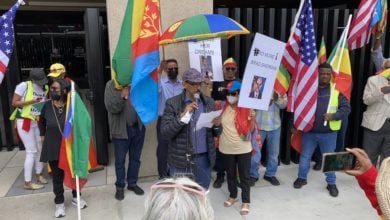