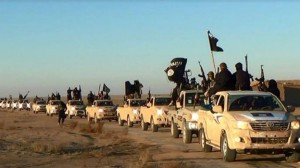 How did ISIS gain so much strength that it could take on Iraq and capture so much of its territory? To understand the answer to this question, we need to first understand the roots of the conflict in Syria and the Middle East.

During WWI, France and Britain drafted the Sykes-Picot agreement, which resulted in artificial borders being drawn based on their own interests. ISIS has said that it wants to “smash the Sykes-Picot borders” and build an Islamic state or a caliphate.

It is a rejection of imperialist domination, but it is based on a reactionary ideology. The Islamic State wants to take things back centuries to when, in their minds, society was just and everyone was pious. And, despite a rejection of all things Western, jihadist forces often make deals with imperialism, such as they did in Afghanistan with the creation of the Mujahedeen, the forefathers of the jihadists in the region.

ISIS broke away from Al Qaeda in Iraq. But it was really in Syria that they gained strength. Long before the recent attack on Iraq, ISIS had control of significant parts of Syria.

Greater Syria used to be a French colony. But after WWII, Syria gained independence. The Ba’ath, an Arab nationalist party, has been the ruling party in Syria for decades. The ruling system has gone through many shifts and changes. In its early days, the Ba’ath program in Syria had a significant socialist component. The state implemented progressive reforms that brought about development and provided benefits to a lot of people. Since the 1970s and the ascension of Hafez al-Assad, the current president’s father, Syria’s state has moved in the direction of a more typical capitalist state. Syria, however, still has a strong state sector and protections for domestic industries and enterprises.

In foreign policy, despite contradictions and inconsistencies, Syria has given aid to the Palestinian movement and is an enemy of the state of Israel. Frequently, Israel bombs parts of Syria in its effort to tilt the balance of the Syrian civil war against the state.

Under the leadership of Bashar al-Assad, the Syrian state is, and has always been, a strongly secular state, not a sectarian one. During the civil war, Western media reports have portrayed the Syrian state as an Alawite dictatorship. In Syria, the majority are Sunni Muslims with Alawite Muslims and Christians as sizable minorities.

Similarly, imperialist states and their media mouthpieces tried to portray the Ba’ath Party rule in Iraq as a Sunni dictatorship of Saddam Hussein. But the fact is that the Ba’ath parties, both in Iraq and in Syria, are secular parties, not based on any particular religion. Members of Ba’ath encompassed Sunnis, Shiite, Allawites, Christians and others. In fact, the main founder of the Ba’ath Party was Michel Aflaq, a Christian.

U.S. strategy in the Middle East has long been to crush independent states, so it has wanted to overthrow the Syrian state for decades.

From the very beginning, the United States gave support to the opposition. When protests evolved into a full scale armed uprising, the rebels began receiving significant arms from abroad. In the U.S. media, the opposition rebels were portrayed as predominantly pro-democracy forces.

The main states that have given support to Damascus in the civil war have been Iran and Russia, with Iran providing significant financial and armaments support, along with military advisers. Hezbollah, the Lebanese resistance force, has also played a very active role in fighting the Syrian rebels.

Officially, the United States only provides so-called non-lethal assistance to the rebels–and only to the rebels of choice. Most of the arms and funding to the Syrian rebels have come from U.S. client states in the region. The biggest sponsors of the armed opposition have been Saudi Arabia and Qatar, ultra-reactionary Gulf states. If we bought into the pro-democracy characterization of the opposition, it would be difficult to explain why reactionary monarchies that violently uphold a hereditary power structure at home support a pro-democracy movement in Syria.

In Libya, the nationalist state has now been replaced by a weak, pro-West, compliant state. In fact, given the armed bands of thugs, the so-called revolutionaries, that roam the streets, Libya is now very close to being a failed state. For imperialist interests, this is not necessarily an entirely bad thing, as long as the system remains stable enough to make possible the extraction of resources, in the case of Libya mainly oil.

The rise of ISIS

The civil war in Syria is what made possible the rise of ISIS. Directly, the United States has only supported a force on the ground that calls itself the Free Syrian Army. Politically, the United States has formed a coalition abroad that is called the Syrian National Coalition. Earlier variations of this political formation were called Syrian National Council, or the SNC.

Leaders of the SNC have lived abroad for decades and have little if any ties to any forces within Syria, not even to the Free Syrian Army, supposedly their own rebels. It was largely due to the efforts of Hillary Clinton, at the time U.S. Secretary of State, that the SNC was formed. The United States wants to overthrow Assad government and replace it with the SNC, a weak political formation that owes its very existence to Washington.

There are several camps of opposition forces in Syria. Only one is the Free Syrian Army. Just last week, President Obama asked Congress for $500 million of additional funding for the FSA.

Then there are the jihadists, who actually have emerged much stronger than the FSA. They have more fighters and control more territory. There are literally dozens of different jihadist groups operating in Syria. But the two main ones are Jebhat-al-Nusrah and ISIS. Nusrah are the Al Qaeda affiliates in Syria and ISIS are the Al Qaeda breakaways. Both share essentially the same ideology.

Within Syria, the tide of the civil war has turned in favor of the state over the past year. Over time, Syrians living in rebel-controlled territory have experienced the true character of the rebels, which has increased the government’s support in the war. To the jihadists, the secular state of Syria, which grants equal rights to Alawite and Sunni Muslims as well as Christians, needs to be overthrown and replaced with the imposition of Shari’a law under a strictly sectarian state. They have also stated that they want to destroy Shiite shrines as they already have in Mosul. Many people who had been opposed to Bashar al-Assad’s government developed a hatred and fear of what a Syria under the control of the rebels would look like.

In-fighting among the rebels has been a significant cause of their setbacks. Thousands have been killed as, increasingly, rival rebel groups fight and kill each other. There have been shifting alliances but, broadly speaking, ISIS has been on one side of the in-fighting, with the Nusra, the Al Qaeda affiliate, forming alliances fighting against ISIS. But now, ISIS’s gains in Iraq have shifted the balance in favor of ISIS.

Washington’s relationship with ISIS and other jihadist forces is complicated. The United States has not supported ISIS directly because that’s not the force they want to take over Syria. But, up to now, Washington has viewed ISIS, along with Nusra and other Jihadists in Syria, as useful tools. To the extent that they fight the Syrian state, they are helping Washington.

In recent weeks, much has been made of how ISIS took all the money from the banks of Mosul and all the weapons from Mosul’s military bases, and this is all true. But ISIS already had significant resources long before it took over parts of Iraq.

Thanks to the intervention of the United States, ISIS already controlled parts of Syrian territory. ISIS had support from Saudi Arabia, Qatar and other Arab monarchies. ISIS already had a free pass over the borders of Jordan and Turkey. And these are all U.S. client states. And that’s how ISIS gained strength. To the extent that ISIS has support on the ground, it is not in a vacuum. It is in an environment in Iraq where the United States has destroyed the state and promoted ethnic conflicts.

U.S. OUT OF THE MIDDLE EAST!