Right wing opposition sympathizers in Venezuela are on social media, as always decrying so-called government “repression” while obscuring the real motivations behind the effort to bring about regime change in Venezuela. Such online propaganda campaigns are nothing new. What is new is that in recent weeks, they have been citing the “socialist” U.S.-based magazine Jacobin. How could this be?

One of several essays published recently by Jacobin was titled, “Why Is Venezuela Spiraling Out of Control?” by Gabriel Hetland. In his essay, Hetland raises the spectre of “authoritarianism” overtaking the Bolivarian Revolution, a grassroots movement of the poor, working class and indigenous which is largely based in the United Socialist Party of Venezuela (PSUV). It states that this alleged “authoritarianism” is equally responsible for the recent violence in Venezuela as are the brutal right wing opposition guarimbas.

To substantiate this claim of authoritarianism, the essay points to the fact that the government isn’t playing nice with the Organization of American States. The OAS is presented as a neutral body rather than what it is in reality: a historic tool of U.S. imperialism. Ask Cuba, Bolivia, Ecuador, and the Caribbean nations who recently blocked the blatant OAS attacks on Venezuela obviously originating in the Pentagon.

Ignoring this, Hetland (and Jacobin) find themselves in agreement with the arch rightwing Miami Herald, which recently published a frothy condemnation of these Caribbean states for standing up against OAS president Luis Almagro’s attempts to isolate Venezuela.

Hetland’s essay claims the international solidarity movement for Venezuela is “likely dwindling.” That the ALBA and Caribbean nations (some of which aren’t leftwing in character) are acting in support of Venezuela contradicts this claim. Hetland is just promoting the idea that such support should dwindle.

Hetland encourages his readers to support the supposed “majority of Venezuelans who are suffering at the hands of a vengeful, reckless opposition, and an incompetent, unaccountable government.” He asserts that the government’s base of popular lower-class support “has declined” while admitting, ambiguously, that such support is still “not insignificant.” Having criticized both the opposition and the government in equal measure, he ends with a gentle advocacy to “throw them all out” — an apolitical slogan that obscures the current political stakes. He does not mention the major social gains of the Bolivarian Revolutionary government whatsoever, the progressive political role Venezuela has played in the region, or the multi-year campaign of U.S. imperialism and the Latin American oligarchies to roll back the left-wing tide.

Jacobin’s caption offers an answer to the article’s central question: “Opposition violence and the government’s increasing authoritarianism are both to blame.”

Such articles advocating a non-existent “third way” of supporting “the people” in the abstract only fosters confusion and cynicism. When the forces of reaction in Venezuela are on the offensive, abetted by the Western media on a daily basis, such analyses obstruct solidarity organizing from within the United States. It tells the working class of the United States that they have nothing at stake in the defense of Venezuela at the exact moment when a progressive left-wing government, having endured years of sabotage, is under threat of possible “humanitarian” intervention.

Beyond re-publishing this reactionary hitpiece (originally published by NACLA), Jacobin released recently “The South is our North,” (by Patrick Iber, May 19). This piece is devoted to critiquing TeleSUR, Venezuela’s Bolivarian media network, in the most vapid liberal way imaginable. It quotes one opposition figure Hugo Pérez Hernáiz, who predictably called TeleSUR “useless” (to his politics!), and an academic who moans that watching the station is too much “like going to a rally.” The whole article essentially takes TeleSUR to task for putting out the Bolivarian government’s perspective at a time when it is being slandered and attacked in the national and international media on a daily basis.

The article complains that apolitical public service announcements are less common now and that the programming is more politicized. Since when does a socialist publication object to partisanship and insist on some phony objectivity or distance from the political struggle? Are we really that surprised that as the class struggle and civil conflict in Venezuela has escalated to the most pitched level in decades — to a life-and-death situation — that this might indeed affect the tone and coverage of the Bolivarian media?

To publish a gratuitous and false attack on TeleSUR at this moment is not some heroic effort to save left-wing critical thinking, as they contend. All it does is add a voice to the chorus of condemnation that U.S. workers and progressives are already hearing. The critique of TeleSUR becomes another way of taking no side in the current struggle in Venezuela, a way of saying that the elected Maduro government and the Venezuelan people do not have the right to defend their revolution. It erodes support for the only force in Venezuela that is capable of defending the working class from the oligarchy’s counter-revolution, which if successful would unleash full-scale fascistic violence.

Is this something a socialist, internationalist, anti-imperialist publication would do, especially at a time when the PSUV-led government in Venezuela is under constant economic, diplomatic, and physical attack?

No solidarity for Cuba’s PCC

Venezuela’s ally Cuba has also been a frequent target of Jacobin’s attacks from the “left.” In the most recent example of this, Jacobin published an article by Sam Farber (“Trump’s Cuba Rollback,” June 20) about U.S. President Donald Trump’s declarations from June 2017, with a sub-head reading: “Trump’s stance on Cuba will do untold harm to the Cuban people and only strengthen anti-democratic forces on the island.” The piece makes it clear that Raul Castro and Communist Party of Cuba (PCC) are the “anti-democratic forces” in question.

This reuses the tired trope of the U.S. liberalism — that the Cuban government desired the blockade to hold onto power, and that, by implication, the lifting of the blockade could unleash “democratic forces.”

The article makes repeated calls for U.S.-type multiparty democracy, which have been rejected by the Cuban people since the days immediately following the triumph of the revolution in 1959.

Jacobin has published many articles about Cuba in the same mode over the years, several of them written by Farber. At the bottom of his latest article, he references U.S. respect for the self-determination of other nations, including Cuba. Perhaps it is time for him to follow his own prescription and give up on the dream of the overthrow of the Cuban government. The Cuban people don’t need Farber, Jacobin or anyone else to give their U.S.-centric opinion on how to organize their government.

In the pages of Jacobin one will search in vain for genuine expressions of solidarity with governments targeted by U.S. imperialism, whether they be Cuba, Venezuela, DPRK, Syria, any other. The fact that the publication’s editors have taken a hard line against the Bolivarian government of Venezuela, the PCC in Cuba and truly leftist media like TeleSUR, shows that they have little interest in engaging with the living movement for socialism and national independence across the Global South. 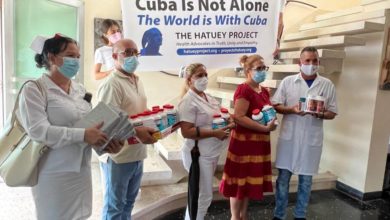 Maternity homes in Cuba: A story of human-centered care