On July 3, the Southern California organization Jews Against ICE organized a protest at the Theo Lacy Detention Center in Orange, Ca. Making sure it was not a visiting day so as not to prevent families and friends from visiting those incarcerated inside, protesters blocked entrance points and held a rally. Soon after they arrived, the two guards posted outside quickly grew to eight and began to surround the protestors. Members of the Party for Socialism and Liberation – Los Angeles and other community groups were there in solidarity.

The number of protesters grew, more officers arrived and a helicopter hovered overhead. The protesters made speeches and sang songs. Two groups, with arms linked, risked arrest by standing in front of the two entrance doorways.

A speaker from Jews Against ICE reminded the crowd that seeking asylum is legal in the United States, and that migrants are not committing a crime by coming into the country. Another protestor, Luisa Lopez Alejandro, pointed out that many are seeking asylum due to ongoing U.S. intervention in Central America, and that this fact is not being illuminated by history classes or the monopoly media.

Alejandro also mentioned that while this specific detention center is ending its contract with ICE in August, seemingly a positive development, the truth is that migrants will be sent hundreds of miles away, separated from their families, support systems and legal representatives instead. She said that the federal government started transferring detainees as early as last week; the remaining detainees at Theo Lacy are those with legal representation.

Another speaker warned that Jewish people have been racially “othered” in the past, like those being held in the camps today, and if Jewish people began to be marginalized at the same scale once again, they would face similar violence. She urged that people cannot defeat white supremacy pillar by pillar, but rather all at once, united.

One speaker brought six candles, lighting one for each of the six children who have died so far while detained in the custody of immigration agencies. As she said their names, a protestor blew out each one of the candles.

Sophie Reiff shared her experiences visiting Adelanto Detention Center, an all-womens’ detention center north of Los Angeles. Her group was not allowed to bring in paper so she wrote messages on her body in permanent marker, including hotlines they could call for legal representation. Inside the detention center were women from all over the world some of whom have been detained since before Trump’s election, some just a week prior to the visit. Many had lived in the U.S. for decades, having moved here when they were children. Two women had similar stories of plainclothes ICE officers approaching their children at school, saying they were friends of their mother, and requesting the kids to call their mother. When the moms showed up, they were arrested in front of their children. Another woman witnessed ICE arrest her boyfriend, and was also arrested for being present at the site.

An hour or so into the protest, police asked protestors to unblock the doors. When protestors were told they were blocking members of the public from coming in to make payments or collect people on release, they did leave the doorway and moved onto the roads. This led to a line of 16 police in riot gear following the six protesters on one road.

When the members of the public were allowed inside, they were told they would not be able to complete any transactions due to the protesters present outside.

Goldberg shared that when her great-grandfather was organizing unions around Philadelphia in the 1930s, there were private detectives – Pinkertons – who would threaten to kill union organizers to discourage people from fighting for their rights. Today, “We have no excuse to not be doing more. Take a sick day. Take a vacation day. We have nothing to fear and we need to take advantage now because we may not be so lucky four years from now. So if you’re at home and you’re scared, I get that, but push past it, because it’s never been easier than now to organize, and the stakes have never been higher.” 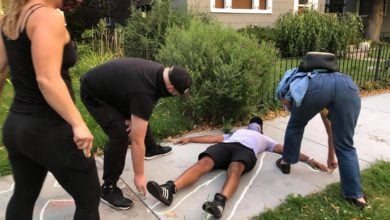