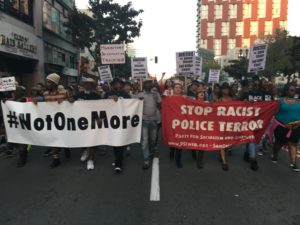 Working people from San Diego, Calif., have been coming together in unity and strength to demand justice for Alfred Olango.

Olango was a refugee from the war-torn country of Uganda. The Ugandan government has long been an ally of the United States in its efforts in gain influence in East Africa. For over 25 years the people have been under economic and violent attack by the government and armed groups.

Under these conditions, many refugees like Alfred Olango and his family fled Uganda to find a more peaceful life. Unfortunately, like many refugees, they find themselves in difficult situations looking for employment and educational options. 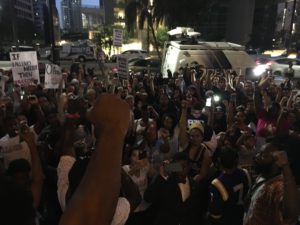 What many come to realize is that the United States is a country founded in violence, from the enslavement of African people and the wars against Native people who were forced off their lands for U.S. capitalist expansion. This violence continues to this day through state-sanctioned violence and mass shootings.

These conditions create the atmosphere in which police officers in this country feel they can murder innocent people in broad daylight with no fear they will be prosecuted. In this case, Alfred Olango was killed in cold blood while his sister watched in horror. This was a 21st century lynching and there have been more murders since Sept. 27 when Olango was killed.

Over the last few days, several protests have been held in the City of El Cajon where the killing took place. People have been mobilizing spontaneously and many organizations have come out to lend their support and leadership. There has been a 24-hour presence of protesters and supporters at the location of the killing. At one point the police used tear gas and projectiles in an attempt to disperse protesters. A woman bystander was hit in the face by a projectile causing serious injury, while another woman was hit in the ribs by police officers.

Despite the increased militarized presence and attempts of authorities to intimidate protesters, the actions have continued.

Lead organizers from Stop the Genocide and the Party for Socialism and Liberation put a call out to hold a large demonstration and march through downtown San Diego.  Several grassroots and established organizations including Reclaiming the Community, Nation of Islam, Nubia, Uhuru, People over Profits, Union del Barrio and Anakabayan USA all came out and spoke or showed support.  The Fruit of Islam graciously provided security during the entire demonstration allowing for people to practice their First Amendment rights to freedom of speech and redress of grievances against the government.

San Diego came out in mass to this call for justice and marched in unity through the streets of downtown, shutting down business as usual.  Protesters shouted “Justice for who? Alfred Olango,” and several other militant chants.  The march ended at the so called “Hall of Justice” with closing speeches and demands for the arrest and conviction of the El Cajon police officer who killed  Olango.  Organizers vowed to continue working to bring justice and build a more organized movement for social justice in San Diego beyond this murder of another innocent Black man.

With so much police violence and lynching taking place in the U.S.,  the Black community refuses to back down and comply with state and vigilante violence.  The only way oppressed people will get justice is when we all have justice and freedom. Until that time we will continue to organize in the streets and push for the change we need and deserve.