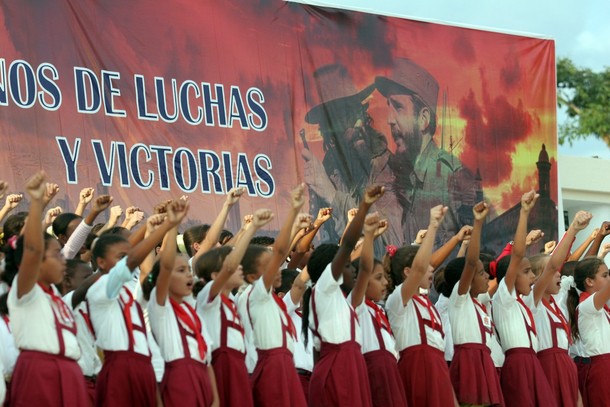 I recently came across this article about a survey done by a marketing firm on the preferences and attitudes of what they call “Generation Z.” We hear a lot in the news about “Millennials,” the group of young people currently in their 20s, but big business is now getting interested in figuring out how to sell to people who are even younger – with Generation Z loosely being defined as people born in the late 90s to early 2000s. An unintended side effect is that communists get a sneak peek at what the next generation of revolutionaries might be like.

The one figure that struck me the most was that 60 percent “want to have an impact on the world.” That’s way higher than the 39 percent of Millennials who say the same thing. About one fourth of Generation Z participates in some kind of volunteer activity – a lot of this is undoubtedly non-profit/charity work, but it still shows an activist instinct.

On a less optimistic note, 72 percent of members of Generation Z currently in high school say they want to start their own business someday. However, this can probably be attributed to the extreme economic stress Generation Z is growing up in. The survey found that their biggest worry by far is the economy, and fewer Generation Zers want to pursue higher education – probably the consequence of seeing their older siblings graduate with huge amounts of debt and no job.

So I think this is less “entrepreneurial spirit” and more about wanting to figure out a way to not have your life destroyed in a meltdown of the global economy. We can work with that.

But the material conditions in society is just one piece of the puzzle when we’re trying to get a sense of the revolutionary potential of a generation (which, by the way, will require more than one survey). I think that the formative political experiences people have are just as important.

Take for instance the leaders of the Black liberation struggle in the upsurge of the 1950s-70s. It’s not as if white supremacy was any less vicious before this period, but major historical developments facilitated the rise of a new generation of revolutionary pioneers.

Over 100,000 Black soldiers went overseas during World War Two, a war supposedly fought to protect “American democracy” against fascism. However, after the war they returned home to Jim Crow or its northern equivalent. As other nationally oppressed peoples rose up against colonialism, Black veterans
like Robert F. Williams and Cecil B. Moore (who declared “I was determined when I got back that what rights I didn’t have I was going to take, using every weapon in the arsenal of democracy”) were part of the core leadership of the early days in this period.

Similarly, many leaders of the later period – often referred to in bourgeois historiography as the “Black Power” era – had their consciousness shaped by the Great Migration out of the South. Huey Newton, David Hilliard and Bobby Seale all wrote extensively in their autobiographies about the huge impact this had on them – discovering that the system was fundamentally the same no matter where you go.

What are the formative memories that will shape Generation Z’s politics? One the one hand the de-legitimization of the system – a murderous war in Iraq built on lies, the endless crisis of the world economy, and the crushing disappointment of the Obama presidency. On the other hand, people fighting back – sitting-in at campaign offices to win protection for undocumented youth, beating the bigots to make progress towards LGBTQ equality, and taking over plazas across the country as part of the Occupy movement. There’s good reason to be optimistic about the future.