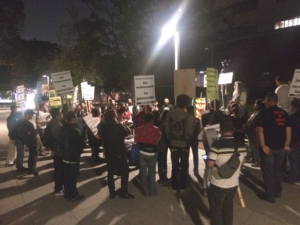 Activists on Oct. 12 met at Los Angeles’s historic Olvera Street and rallied in opposition to a statue of the colonizer Christopher Columbus located in Los Angeles’s Grand Park. Throughout Latin America, October 12th is celebrated as Día de la Resistencia Indígena or Día de la Raza in Mexico (Indigenous Resistance Day or Day of the Race, respectively), which has long been a day to foster awareness of Indigenous people’s yoke under colonialism and imperialism.

Descendants of Indigenous peoples from tribes north and south of the arbitrary U.S./Mexico border along with their allies gathered in the square located on Olvera Street, thought to be the founding place of the city of Los Angeles. When asked what a decolonized LA would look like, one protester answered that an LA freed from colonization would break the chains of all of the people of LA, the majority of whom are part of the working class. Chicano, Native, and Black Angelinos would take control of their own communities, assuring free self-determination. They would dictate every aspect of their lives. Schools would reflect their respective communities by including Chicano and Native Studies. The police would be controlled by the community. Police would not be allowed to look for trouble, terrorize and beat people of color. ICE would not be allowed to infiltrate the communities to terrorize immigrant families.

When asked the same question, Ernesto Ayala of El Partido de la Raza Unida answered, “Every aspect of the government would represent our marginalized members of the community. We fight to create a decolonized community controlled by the people of LA. Which is a working class people. Capitalism and colonialism grew out of each other. These statues represent genocide and murder of our people. These statues represent horrible things. Any rational person should stand against these things. With the advancement in knowledge that we live in today, these statues are still here. We are symbolically fighting what these statues represent, it’s not merely the statues but the oppressive racist institutions which they stand for.”

On the march from Olvera Street to Grand park, organizers’ chants were met with closed ears at the steps of City Hall. They were silenced and run out by police who were protecting a private event to celebrate Italian Heritage Month in progress inside. An Italian flag draped above the steps in a glorified manner fed protesters’ energy while chants of “Stolen land!” grew louder. The beats of a solitary drum provided a cadence and the march resumed toward the monument to genocide placed across the street in Grand Park.

The crowd then gathered in front of the statue of Columbus and members of different groups voiced their personal stories of living in a time deeply affected by colonization.