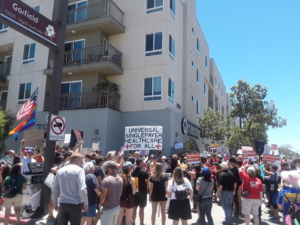 On June 27, angered by the demise of SB 562, hundreds of people from California Assembly Speaker Anthony Rendon’s own district and beyond swarmed his office in protest. In a show of force the protesters set up a sound system and blasted chants and speeches all around before entering his office to hold him accountable.

Viewing the scuttling of the single payer bill as a callous dismissal of human rights, activists at the protest explained that Rendon’s actions have directly infringed on the lives of millions of non-wealthy Californians, including the majority of his own District 63 which he supposedly represents. The working-class neighborhoods of Bell, South Gate, Lakewood and Paramount all in his district also have a large number of immigrant and undocumented working families.

The event was organized by Healthy California and chaired by Bill Gallagher from the California Nurses Association. It featured personal testimonies exposing the failure of the health care system and the need for real health care for all.

Reggie Cervantes, a 9/11 first responder featured in the film Sicko, pointed to the people who were immediately on the scene to help after the terrorist attack on Sept. 11, 2001. They were made sick from that exposure and many are dying now, with their suffering made much worse because of the U.S. healthcare system.

As portrayed in Sicko, Cervantes traveled to Cuba and found that medicine that she paid hundreds of dollars for in the U.S. cost less than 5 cents in Cuba and the Cuban health system gave better care.

Another person featured in Sicko, Dawnelle Keys told her story. In 1993 her 18-month-old daughter became sick. She took her to the Martin Luther King Medical Center in Los Angeles because that was the closest facility. Her insurance, however, was with Kaiser and because this was not a Kaiser hospital, Kaiser denied the simple blood tests she needed and the antibiotics. Dawnelle pleaded for the care and medicine as her daughter became sicker. She was denied and her daughter died. She demanded that
Rendon move the bill forward because people need health care not a system designed for insurance companies.

Brenda, a veteran with diabetes spoke about finding out that her medication would cost $674.85 per month. Now she must choose between medicine, food or rent.

Dr. Bill Honigman, an Orange County emergency room physician exposed the system of “care” that he sees every day.

Directors of the California Nurses Association who are nurses in Bakersfield traveled hours to get the protest to talk about poverty, suffering, health care and the need for health care for all. They talked about cancer patients not getting treatment because they lacked the money.

Elizabeth Castillo, a registered nurse from Lakewood sees very ill patients all time not getting services and sees the danger of the Trump health care bill and the need for action in California.

Many organizations were represented by speakers. Speakers included seniors and retiree groups; Alicia Rivera from the Communities for a Better Environment; the Paramount Community Coalition Against Toxins; Bao Nguyen, the former Mayor of Garden Grove; Rabbi Jim Kaufman and others.

A number of organizations were present in the crowd such as the Pilipino Workers Center (whose members see the healthcare crisis from the perspective of home care workers), the Roofers union, AFSCME, and others.

A retired CAN organizer told a moving story about how his father, a Japanese gardener, lost his home due to bankruptcy due to the cost of surgery. This happened when the organizer was a boy but the story and full truth about it was hidden from him for years- as his parents tried to protect him from the painful truth about the system that did this to them.