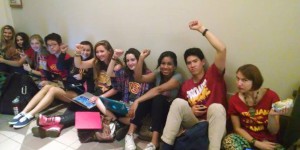 Students at USC sit-in to demand fair treatment of workers in Bangladesh.

It is consequently no surprise that the student struggle faced serious blows after the 1990s, when a general wave of anti-people reaction swept the globe. People’s movements—communist and non-communist—suffered from dwindling numbers and low morale as the socialist governments of Eastern Europe and Russia were dissolved. The left as a whole suffered; the falling tide lowered all boats.

Student organizing was no exception. Campuses, which in the 1960s and 70s had been battlegrounds for opposition to the war in Vietnam, fell quiet. By the 2000s, there had been some recovery amid the anti-globalization movement, but those gains were again reversed in the sharp turn right after the September 11th attacks and the beginning of the “War on Terror.” The Occupy movement again breathed some life into the hobbled students’ movement, but that new life was again short-lived. Twenty years of right-wing backlash dealt the student movement setback after setback.

Among the most serious setbacks was the abandonment of the student movement’s integration with broader class and national liberation struggles. Student organizers stopped looking to labor, Black and Native liberation leaders for inspiration and began to rely “only on students.” Movementism—the idea that individual struggles are independent and should remain separated—replaced class struggle; students “stepped back” and let the struggles that had previously been the student movement’s bread and butter go on their own.

This was not a trend unique to the student movement, but the results were the same: revolutionaries became isolated activists, and the  broad mass movement stood in chaos.

One of the most pernicious trends to come out of the post-Cold War student movement is the embracing of ideologies which render student organizing defenseless in face of reaction. With the post-Cold War era came the general movement’s welcome of “post-modern,” “post-Marxist,” and eclectic ideologies, which downplay the role of class in revolutionary organizing. Liberal ideologies—denying oppressed people’s rights to and need for revolutionary action altogether—also helped steal the student movement’s revolutionary vigor.

These ideological orientations have produced a style of work which is extraordinarily disorganized and slothful, particularly after the Occupy Movement promoted a culture of “leaderless” organizing. The work of student organizing can become extremely slow-moving, erring on the side of inaction, abstention and bureaucratism, which makes involvement in progressive organizing unattractive to the student masses. Meanwhile, such organizations are particularly unwelcoming to students who must work to support themselves while at school.

Valerie Kiebala, a student at American University, puts it this way: “My decreasing ability to participate in campus activism, as my need to work increases, has frustrated me. The inevitable formation of a time hierarchy—students gaining more power and respect the more time they devote to an organization—both makes sense and, usually unintentionally, creates an exclusionary space, uninviting to those students who need to work.”

Why is a student movement needed today?

We see today a dangerous combination of an atrophying student movement and intensified attacks on the interests of students and youth by right-wing, anti-people forces.

After decades of rising tuition, student debt has exploded. There currently is over $1 trillion owed to banks and the federal government. This is the price of opportunity at the “end of history.” Affirmative action—particularly after the Supreme Court’s ruling on Schuette v. Coalition to Defend Affirmative Action—is under vicious attack. Black, Latino, women’s and gender studies departments are under attack, callously labeled “unnecessary” or “outdated.” In a related trend, professors like Anthony Monteiro face McCarthy-esque purges, under pressure that curricula become more class-collaborationist or outright reactionary.

The sum total is that the colleges and universities are becoming less and less a source of progressive ideas. A degree is as much a gateway to heavy debt burdens as it is a source of high-paying jobs. For oppressed communities, colleges and universities look less and less like a road to progress, seeing as how they are  underfunded, understaffed and over-crowded without affirmative-action programs to overcome historic inequalities and oppression. At the same time, the graying leadership of broader mass movements lacks the energy, optimism and enthusiasm young students brought in the the 20th century’s revolutionary high-tide.

In fact, university administrations have become so powerfully reactionary that they have begun a wave of gentrification in working-class neighborhoods, where they are often situated. Schools like Temple University, Columbia University, New York University and others have begun aggressive land-grabs to make their schools more attractive to increasingly wealthy prospective students. Just as building luxury condominiums opens the floodgates to gentrification, aggressive university expansions decrease the supply of affordable housing and import wealthy residents at existing communities’ expense.

These factors—mountainous debt, right drift in curricula, endangerment of university staff and faculty and university-driven gentrification—clearly point to the need for a new, reinvigorated students’ movement. Strong student-worker unity and broad-based struggle is needed now more than ever to keep higher education progressive and to fight back against banks and university administrations. Without special access for working-class and oppressed peoples, colleges and universities’ progressive character sours, becoming again instruments of class ossification and barriers to better job opportunities for oppressed people. The need to fight restoration of yacht-club universities is more pressing than ever as the global counterrevolutionary trend has placed progressive higher education squarely in the crosshairs.