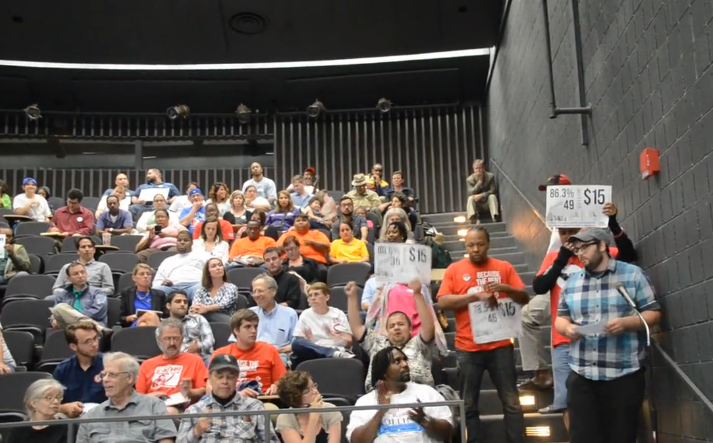 On June 19, Jim Rudd, a coffee shop worker and organizer for my campiagn for Alderman in the 49th Ward of Chicago gave the following statement to the Mayor’s minimum wage task force:

“My name is Jim, I am a former Starbucks worker and a low wage worker at another coffee shop. I am also an organizer for John Beacham for City Council in the 49th Ward. John’s main campaign slogan is ‘Jobs for All and $15 an Hour.’ We are circulating a petition that demands that Alderman Moore of the 49th Ward, who is on this task force, Mayor Emanuel and the city council provide jobs for all and raise the minimum wage to $15 an hour immediately.

“$15 an hour is an absolute necessity and the very minimum workers should be making. No one should live in poverty. Everyone should have a job, free healthcare, a free and equal education and much, much more.

“Let’s be clear, the President and the Mayor’s proposal of $10 an hour will not bring one person out of poverty. The CEOs and stock holders don’t create the wealth, we do. Yet they have shut millions of us out. It is time for them to pay up. Justice demands it. $15 an hour is an absolute necessity, especially when you consider that improvements in technology mean less and less jobs and new jobs are mostly low wage. Left to itself, this trend in 21st century capitalism will continue.

“We will not stand by as the economy drives the vast majority of us into the ground. We will not stand by while the billionaires rob us of our future, jobs vanish, poverty wage jobs multiply and our tax dollars are spent on the largest prison-plantation system for poor people ever created. We will not stand by as Mayor 1% shutters our schools. Low wage workers have taken to the streets, including myself, to demand $15 an hour and a union. We have the sympathy of the population and we have forced this conversation onto the public stage. We deserve justice. We demand justice now.

“We won’t stop fighting until victory. There is a City Council Meeting on June 25. We think we should all be at city hall in the largest numbers possible demanding, ‘$15 an Hour Now!’”

John Beacham teaches Writing courses at colleges in the Chicago area. He is the former coordinator of the ANSWER Coalition in Chicago.