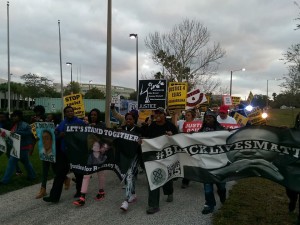 On  January 24, 60 people took part in the “March for Justice in Bradenton” to stand up for Black and Brown lives and to combat racist police brutality. Less than an hour South of Tampa, Bradenton is known for its police corruption as well as the de facto segregation and economic hardship faced by its Black and Latino communities.

In 2012, Sarasota County deputies murdered Natasha Clemons’ 23-year-old son Rodney Mitchell, shooting him within fifteen seconds of pulling him over for an alleged seatbelt violation. Police claim that they shot him because they were in danger, but their story is contradicted by most of the evidence. Since then, Natasha has fervently pursued justice, both in the streets and with the help of civil rights attorneys.

In 2014, a year ago this week, Manatee County deputies murdered Omega Velez’s 22-year-old son Elias Guadarrama after cornering him behind a duplex and ordering all witnesses to go back into their homes. They claim he committed suicide. However, Elias’ many friends and mother are certain it was a homicide, as an independent investigation recently confirmed. They have refused to remain silent.

Also in early 2014, Hillsborough County deputies racially profiled Andrew and Deanna Joseph’s 14-year-old son Andrew Joseph, III at the Florida State Fair, claiming that he was among many Black youths who were “wilding” in a “giant stampede.” After illegally detaining and strip-searching him for gang tattoos, deputies ejected him from the fairgrounds without notifying his parents. Soon after, Andrew was killed by a reckless driver as he crossed I-4.

At 5:00pm, the three families and their supporters rallied on the corner of US 301 and Martin Luther King, Jr. Ave. for thirty minutes, with Bay Area activist Trey Gonzalez on the megaphone. Marchers then took control of US 301, the largest road running through Bradenton. Many New College of Florida students experienced for the first time what it is like to “shut it down,” as the movement sparked by the Ferguson uprising has been doing in cities across the country.

Taking the East side of US 301 and heading toward Manatee River, the multinational group of activists chanted “Hands up! Don’t shoot! Fists up! Fight back!” and “Indict, convict, send those killers cops to jail! The whole damn system is guilty as hell!”

In a display of militant people power, activists staged a die-in at the intersection of US 301 and Manatee Ave E. For four and a half minutes­, one minute for each hour Mike Brown’s body lay in the streets of Ferguson, they refused to move. Despite threats of arrest, the March for Justice held the street, blocking Northbound traffic for around fifteen minutes. Traffic heading South honked and waved continuously in support.

The group marched, linking arms, to Bradenton Riverwalk, where police could be seen waiting for them. As the cold, windy evening grew dark, activists rallied and listened to speeches by Ms. Velez, Ms. Clemons and Mrs. Joseph, as well as representatives of Bay Area Activists Coalition, ANSWER Coalition and Pastor Arthur Huggins of Community Outreach Word of
Deliverance Church in Bradenton. A skateboarder at the Riverwalk who happened on the rally spoke about his friend Israel Hernandez, who died after being tasered by Miami Beach police for graffiti. Finally, Bay Area activist Ashley Green taught the group to sing the beautiful protest song issued by Samuel L. Jackson as a challenge to celebrities who participated in the ALS Awareness “Ice Bucket Challenge” videos:

“I can hear my neighbor crying ‘I can’t breathe,’
now I’m in the struggle and I can’t leave,
calling out the violence of the racist police,
we ain’t gonna stop till people are free.

“We ain’t gonna stop till people are free.”

Leaving Riverwalk, activists marched around Manatee Memorial Hospital and back to the intersection of US 301 and Martin Luther King, Jr. Ave, where they continued to rally.

The March for Justice in Bradenton follows several months of large protests held across the Suncoast to raise consciousness about systemic racism and the struggles of people of color. As the movement continues, growing numbers of community members have been inspired to speak publicly about racist violence in their own lives. The movement will not end anytime soon, with several events already planned for the coming weeks.

On Friday, February 6th at 5:15pm, there will be a protest at the Florida State Fairgrounds as part of the 1st Annual “We Remember Andrew Joseph, III” Memorial Weekend Event. Supporters will meet at Wing House on US 301 North in Tampa before speaking out against profits over safety, the unsafe partnership between Hillsborough County Schools and the Florida State Fair, and the State Fair’s gun-friendly policy.

On Friday, February 13 at 6:00pm, the Student Nonviolent Coordinating Committee at USF will host the S.N.C.C. BOSS Event at the Allen Temple AME Church in Tampa. Survivors of violence and the wider community are invited to this demonstration of freedom, featuring music, theater and festivities.