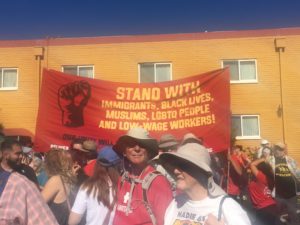 From October 7 to 10, over a thousand people gathered in Tucson and Nogales, Ariz. for a U.S./Mexico Border Convergence against the militarization of the border, border patrol violence and murder, and the division and imprisonment of immigrant families. The weekend of action was sponsored by the School of America Watch and included representatives from nearly 400 organizations from across the country.

The weekend was started with a mass vigil at the Corrections Corporation of America’s Eloy Detention Center in Pinal County, Ariz. on Friday. The Eloy Detention Center has been under special scrutiny as the deaths at Eloy represent over 9% of the total deaths of detained immigrants in a system of more than 250 facilities nationwide. A total of 14 people have died including several high profile suicides. In one case, Guatemalan immigrant Manuel Cota-Domingo died due to complications related to his diabetes after his cellmate spent hours through the night banging on the door in a desperate attempt to get medical care. 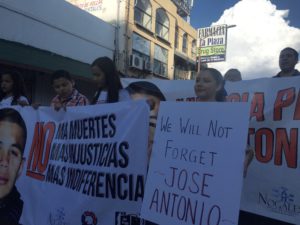 On Oct. 8, the Party for Socialism and Liberation joined a mass demonstration led by Veterans for Peace from the Hotel Americana to the U.S./Mexico border wall that cuts Nogales in two. Hundreds marched through the checkpoint as other demonstrators surrounded the footpath, causing the checkpoint to be closed in a brief, tense moment as a large force of Border Patrol stood by. Protesters marched nearly two miles to the chants of “Down, down, down with the border! Up, up, up with the people” and “From Nablus to Nogales, we’ll tear the walls down!”

Organizers chose a space to rally along the border wall on International Street, just a few hundred yards from the site of the killing of Jose Antonio Elena Rodriguez by Border Patrol in 2012. Jose Antonio was only 16 when Border Patrol agent Lonnie Ray Swartz shot him ten times from across the border fence for allegedly throwing rocks, which posed no threat as the thirty foot border fence was at the top of a thirty foot rock wall. Swartz is scheduled to face trial this year and is the first Border Patrol agent to be indicted for one of these cross-border killings.

Later in the day, hundreds of protesters joined in a series of political workshops at Hotel Americana discussing a wide range of topics and points of solidarity, including issues such as Palestine, police brutality, U.S. support for reactionaries and regime change in Latin America, the so-called ‘War on Drugs,’ and much more. That afternoon, PSL members joined a march of about 100 people on the Mexican side of the border to demand justice for Jose Antonio. The march, led by family members of Jose Antonio, took over busy International Street from Plaza de la Palomas and headed straight for the site of Jose Antonio’s killing, where a new mural honoring him was unveiled. The bustling noise of the border checkpoint and thousands commuting back and forth came to complete silence as the march proceeded. People came out of their homes and businesses to stand by and pay their respects to Jose Antonio and the family. 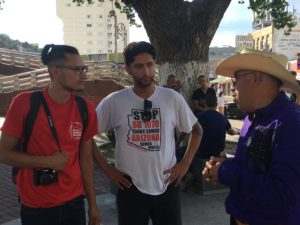 Jose Antonio’s uncle spoke to Liberation News and stated that Jose Antonio was not the first case of cross border violence and that a previous teenage victim, who was an orphan, had been killed with little response from the community. Local organizers in Mexico talked to Liberation News about the military character of the border experience in Nogales, where Border Patrol agents shoot pepper spray through the wall on a regular basis at family homes causing people to get sick, shoot at civilians, and even maintained blinding lights through the night on International Street that disrupted the sleep of hundreds of residents in Mexico. 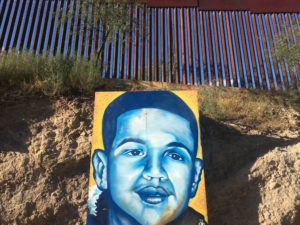 On the third day, a large group of protesters shut down a portion of I-19 at the Border Patrol checkpoint just a 20 miles north of Nogales. Over 20 members of the convergence interlocked arms in an act of civil disobedience and shut down the highway for five hours under threat of tear gas, arrest and felony charges. Later that same day, a mass die-in at the administration building of Border Patrol took place in Tucson. During the die-in, father Roy Bourgeois, SOAW founder, was dragged and kicked by Border Patrol agents.

The weekend of actions was intended to dramatize the daily threats faced by immigrants who cross through the perilous desert in Arizona—one of the only open crossings since billions of dollars in border walls have been built along California and Texas borders. They were also intended to highlight the militarization of the border since 9/11. From the time of 9/11, the Border Patrol in the region has shot up from 400 agents to 4,000 with a budget that went from millions to billions and an arsenal that now includes drones, military weapons and military vehicles. Activists spent Oct. 10 in Tucson at a mass action to reject Columbus Day and demand the establishment of Indigenous People’s Day.

The mass convergence at the border was an act of genuine, concrete solidarity by U.S. activists in the fight for amnesty and an end to border deaths, immigrant detention, and militarization. The PSL will continue to proudly stand on the front lines of international solidarity. The workers struggle has no borders!