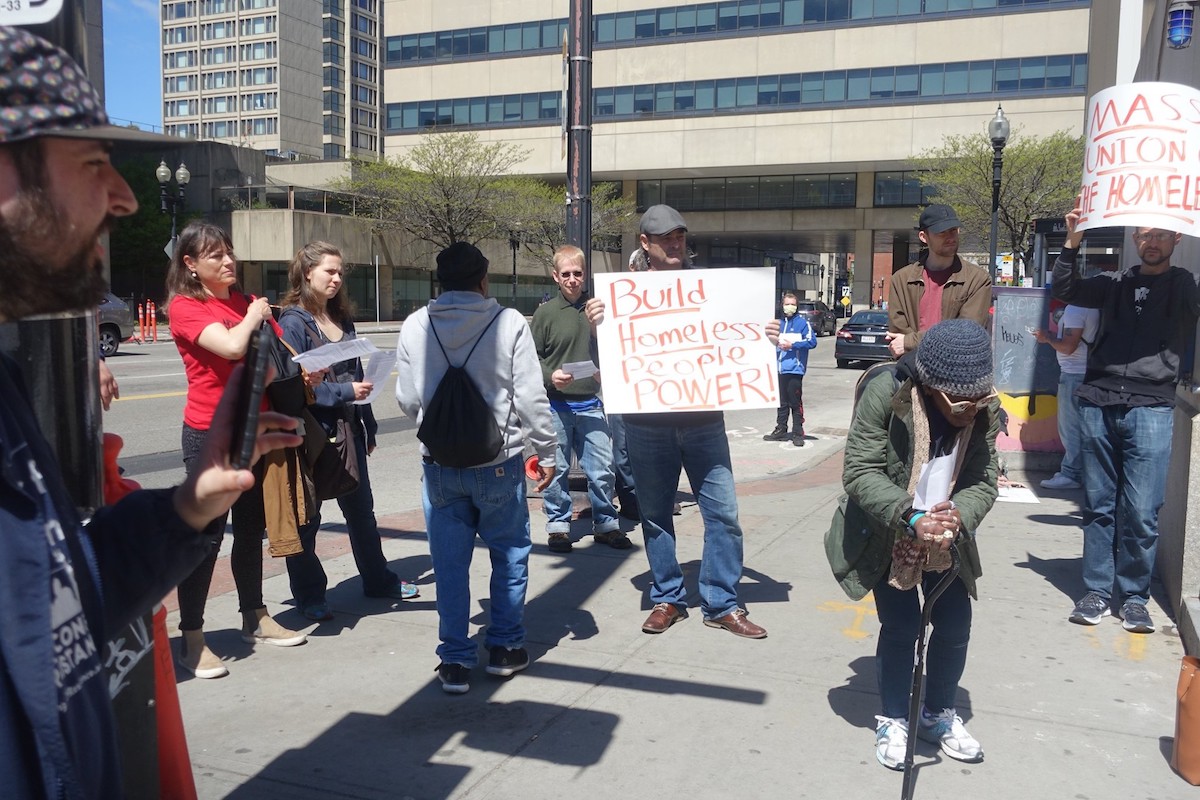 Massachusetts Union of the Homeless hosts a speak out in Boston. Photo by Howard Rotman. Used with permission.

At 10 AM on May 11, organizers with the Massachusetts Union of the Homeless gathered at the intersection of Albany Street and Massachusetts Avenue in Boston to hold a speak out. The location was chosen due to its close proximity to the Southampton Street Clinic Men’s Shelter, the Woods-Mullen Women’s Shelter and the Barbara McInnis House — a medical respite facility for people experiencing homelessness.

James Shearer, co-founder and editor of Spare Change News, kicked off the speak out: “Almost 30 years ago a group of homeless people, myself included, created a newspaper called Spare Change. It wasn’t just to make money: it was to give us a voice. It was to empower us. No one is coming out here to save us. We’re going to have to save ourselves. We need to organize, organize, organize.”

For over an hour, about a dozen people experiencing homelessness took to the mic to expose the severe oppression and exploitation they face on the streets and in the shelters while trying to navigate the system to secure housing. “My paperwork got lost in the shuffle and I was never granted housing. I’ve been stuck [at Woods-Mullen] for three years,” Tracey, a woman experiencing homelessness, shared with the crowd. “I keep walking in circles because they keep sending me in circles.”

The speak out captivated people walking by, and at its height, over 40 community members assembled on the sidewalk to listen to testimonials. MUH organizers distributed flyers to passersby, many of whom stayed for the entire demonstration. Community members filled the street corner with signs that read “Homeless not helpless” and “Build homeless people power” as cars driving by honked in approval. One woman passing through the crowd yelled, “Homes not shelters!”

Dustin King, a MUH leader condemned the capitalist system for manufacturing poverty and homelessness. “The police, the banks, the rich, the economic system is designed to keep us down. To keep us from succeeding. There are three empty apartments for every homeless person in this state. Why is that? Whose pockets are getting bigger off of that? Sure as hell ain’t us.”

Immediately after the speak out MUH held a community lunch and meeting, which allowed MUH organizers and people experiencing homelessness to share a meal, identify shared issues, and strategize on how to fight back and engage in political education. “Black mold and other fungi are constant problems,” said a woman experiencing homelessness who asked not be identified. “We were promised under the new director [of Woods-Mullen] that we would have a professional mold remediation company come every few weeks to take care of the problem. It happened once last summer and never happened again.”

The meeting also included a political education component facilitated by Party for Socialism and Liberation member Joe Tache. Tache presented on the basic principles of capitalism and explained why there is always a housing crisis in a system that benefits the few at the expense of the many. The meeting ended with a call to action for everyone in the room to take flyers, hold conversations with people experiencing homelessness about their struggles, and invite them to MUH’s weekly organizing meeting.

“The Massachusetts Union of the Homeless with a cry of ‘housing and respect’ that rings of the revolutionary cry for peace land and bread, has begun the undertaking of finding the loud voices of the leaders within the community,” MUH organizer Angela Mae Ní Mháille told Liberation News. “Events like our speak out serve to demonstrate that even this early on we are primed to not only get what we need, but to work towards a better world.”

The Massachusetts Union of the Homeless meets every Saturday from 12-2 PM at the Church of St. Augustine 31 Lenox Street in Boston.