Violent police-led evictions are being carried out in Michigan despite a Centers for Disease Control eviction moratorium meant to slow the spread of COVID-19. Legal loopholes and non-compliant judges make the moratorium easy to circumvent.

While the CDC issued this order “because evictions threaten to increase the spread of COVID-19,” it offers extremely limited protection. The CDC order is means tested and only stops evictions due to non-payment after the tenant fills out the proper paperwork. If this paperwork is filled out improperly, tenants can be prosecuted for perjury. Landlords have easily skirted this moratorium by simply changing the reason for eviction from non-payment to reasons like property damage and the lease ending.

Even the few tenant protections guaranteed by a Michigan Supreme Court interpretation of the CDC order have been ignored by local judges. According to an investigation by the Detroit Free Press, judges have failed to follow a state Supreme Court order requiring them to tell renters about available financial aid and their right to an attorney. The investigation found judges in Detroit and the suburbs of Dearborn and Southfield who were not complying with the order. Non-compliant judges are unlikely to be limited to metro Detroit.

Further complicating the matter, Michigan does not collect meaningful eviction data. This leaves experts and journalists to guess at the scope of the problem. The data that does exist offers a grim picture. According to a 2018 University of Michigan study, 1 out of 6 rentals in the state faced eviction. That was before the pandemic.

Easy legal solutions, however, exist to this problem. For example, activists have issued calls for Democrat Gov. Gretchen Whitmer to reinstate the statewide eviction moratorium she let expire in July. That statewide moratorium, while clearly flawed, set a higher legal bar for evictions than the CDC moratorium. Under the state moratorium, all evictions would be banned except for when a tenant poses a substantial risk to another person or property. The state moratorium is also not means tested and does not require tenants to fill out paperwork.

Precedent exists for even more dramatic action. During the Great Depression, tenants won rent relief and long-lasting federal reform. Most famously, in New York City, the Communist Party led a series of rent strikes and eviction defenses, frequently engaging in street battles with police. If an eviction was carried out, workers would help the tenant move their belongings right back in.

This militant action led to 25 states passing eviction moratoriums. The Michigan Mortgage Moratorium Act of 1933 banned foreclosures and foreclosure-related evictions, and required judges to ensure “fair rental terms” allowing tenants to stay in the home. These state moratoriums were upheld as legal by the U.S. Supreme Court, which ruled that, “States may use their protective power in a reasonable manner to affect rights under any contract.”

Additionally, militant workers during the Great Depression forced Congress to pass the United States Housing Act of 1937, which established modern public housing programs, and a federal five-year rent control program that many states still use today.

These measures, which represent a temporary fix to the housing crisis, only came about through militant and highly organized resistance from workers. The same is true of any expanded aid today.

By allowing the statewide eviction ban to expire, Gov. Whitmer has indicated she wants to slowly strip away the minimal eviction protections that exist while both the pandemic and economic depression intensify. This attack on the human right to housing during a pandemic must be met by militant, organized actions. 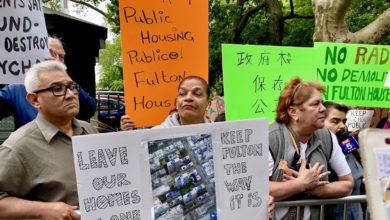