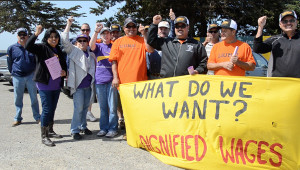 Over 90,000 workers are projected to get a raise directly as a result of these votes.

A number of commentators and newspapers predicted these victories, but because they failed to look at the history of the struggle leading up to the election, they drew the wrong conclusion, implying that these were easy wins. In fact, it is never easy to win important gains in rights or money for workers.

Big business and politicians who are eager to block any expression of workers’ power put up road blocks in many forms. On March 25, 2013, for example, the governor of Mississippi signed a law banning any city or county from establishing a minimum wage. The five states without any minimum-wage law are all in the south: Alabama, Louisiana, Mississippi, South Carolina and Tennessee. That along with the legislative minimum-wage defeat in Louisiana makes the win in Arkansas that much more significant.

But roadblocks and schemes to derail increasing the minimum wage are not just in the South. Idaho workers collected thousands of signatures but were not able to meet the requirement to get over 53,000 or 6 percent of all 2012 voters. (Idaho has the largest percentage of minimum-wage workers among all the states in relation to all hourly workers.) In Michigan, workers collected and turned in 320,000 signatures but were then told that too many people had signed twice in the small sample that the state looked at. Just to be sure about defeating the minimum-wage increase, legislators devised elaborate strategies to nullify the petitions by eliminating the law that the petitions were supposed to change.

In the states where the struggle did get the issue on the ballot, workers and community members had to fight to get it there, keep it there and get it passed.

Alaskans for a Fair Minimum Wage went to the North Pole, to the World Eskimo Indian Olympics and to cities and towns across the state to gather over 43,000 signatures. They got their proposal on the ballot. But that was not enough. Back in 2001 and 2002, they had also gathered enough signatures and after they did, the legislature passed its own increase—but a lower one and then eliminated the COLA. Their maneuver legally preempted the referendum. This time the coalition was able to block a similar legislative attempt.

In Arkansas, the “Give Arkansas A Raise Now” coalition had to go to court to defend all of the petitions they had gathered across the state. They were being challenged by an ultra-right-wing, anti-union grouping. But they were successful in keeping it on the ballot. Although the raise is small, an increase to $8.50 an hour by 2017, it represents a victory in a state that fights against unionism tooth and nail.

In Nebraska, workers gathered nearly 90,000 verified signatures (9,000 more than needed), and in South Dakota they gathered over 15,000. Combined, there are 50,000 workers in these two states who will immediately benefit from the raise.

In Illinois, there was a non-binding vote to raise the state minimum wage to $10 per hour. The fact that a weak minimum wage bill did not pass the Democratic Party-controlled legislature recently is a sign that any real action there will take a big struggle. Even worse it appears that they now have “right to work” advocate Bruce Rauner as governor.

Ten states and Washington, D.C., enacted laws in 2014 that increased the minimum wage. Connecticut, Hawaii, Maryland and Vermont enacted laws that will raise their state minimum wages to over $10 by 2017 or 2018. At the same time, similar efforts to get a minimum wage increase through state legislative action were defeated in Louisiana, Minnesota and New Mexico

Votes at the city level

Votes were also held to raise the minimum wage in San Francisco from $10.74 to $15 by 2018. Billboards had tried to raise fear about the consequences of raising the minimum wage, with images implying that workers would be replaced by cheap machines. Despite that message, the new law passed with a reported 76 percent of the vote.

In Oakland, Calif., they voted to increase the minimum to $12.25, and that all workers would be guaranteed five sick days each year. That passed with 80 percent voter approval

In Eureka, Calif., however, a measure to increase the minimum wage to $12 per hour was defeated by a vote of 62 percent (with 5,630 people voting).

In June, the Berkeley, Calif., City Council voted to increase the minimum wage to $10 per hour effective October 2014 and then to increase it each year till it reaches $12.53 by 2016.

Richmond, Calif., increased its minimum wage this year to $12.30 by ordinance.

In July, the San Diego City Council voted to increase the minimum wage to $11.50 by January 2017. But then the right wing pressed them on this and the council decided to put the issue on the ballot in 2016.

California has an increasingly active labor movement that is uniting with worker centers and community groups to demand and fight for higher minimum wages, real wage enforcement and paid sick leave rights for all workers.

Los Angeles has the biggest movement demanding $15. So much so that the mayor has offered a $13.25 wage by 2017—with no wage enforcement and no paid sick days. Labor is fighting for much more and there is a petition campaign to get $15 on the ballot for next spring. It seems likely that no matter what the City Council does, big business will force the matter to a referendum and the city will be filled with lying ads about how raising wages and rights will lead to the downfall of everything.

Similarly, labor and community groups are fighting for higher minimum wages in cities across the U.S. In June, the Seattle City Council passed a $15 minimum wage but phased in over a number of years and applying to larger employers.

In New York City, where 46 percent of all workers are paid just over the poverty line (150 percent), the mayor signed an Executive Order in September to close a loophole and raise wages from $11.90 to $13.13 for a number of workers.

After many demonstrations and strikes by concession workers in federal facilities in D.C., President Obama finally issued an Executive Order setting $10.10 as a rate for contractors.

A raise, but to how much?

Each state that passed an increase tonight did so by stages or increments:

No one who pays rent, buys food, and pays for gas and electric bills thinks that this any of these amounts are enough. In each state, the amount was debated. In some, they undoubtedly looked at polls to determine what would be likely to pass. They certainly didn’t make the determination based on need.

Sights should be set high and certainly in many places around the county $15 per hour now is the demand that is being heard more and more.

But even $15 is not enough to cover basic expenses and not be in poverty. Just check the National Low Income Housing Coalition for how much a worker should make in your location in order to only spend 30 percent of their income on rent. In Los Angeles, the pay per hour for a one bedroom would have to be $20.83 and for two bedrooms $26.88. (nlihc.org/oor/2014)

The number by itself is not as important as the struggle to get the maximum possible. If the conditions are such that more can be won, more should be demanded.

Each step forward though, no matter how small makes it easier for others to win more. That is part of building a movement.

Bosses exploit our labor paying as little as they think they can get away with. Their idea of a fair day’s pay for a fair day’s work is paying you just enough to get you to come back the next day, while at the same time forcing you to produce as much (profits) as possible. Winning a higher minimum in this circumstance, no matter the number, shows everyone that it is possible to fight back and win. More fights for higher wages will ensue.

Key to winning, of course, is unity. A key to winning unity is making sure that everyone is covered by the minimum wage, including domestic workers for example and workers in small companies. Vast armies of tipped workers have much lower minimum wages in most states. Many of them are also precarious workers, with insufficient hours of work—and irregular hours of work.

And finally demands on pay instantly raise all of the issues that we need pay for. This in turn exposes the health care/health insurance system as well as the lack of paid leave that many workers suffer. That is why so many minimum-wage campaigns also include a paid sick leave element.

A recent development in Wisconsin highlighted how the other side feels about wages. Activists raised the issue that the state’s constitution requires a “living wage” They noted that the minimum wage in Wisconsin was only $7.25 per hour and that couldn’t be a living wage. On Oct. 6, Gov. Scott Walker’s anti-union administration declared that there was “no reasonable cause” for their complaint. $7.25 was just fine. And in case you think that Gov Walker is just a whacko that only extreme right-wing billionaires like the Koch brothers admire, think again. In April, the “liberal” Time magazine celebrated him as one of the top 100 most influential people in the world.

Referendum as a strategy

The mass struggles of the 1930s gave birth to the 1938 Fair Labor Standards Act, which established the first federal minimum wage for most workers. Much of the activity for increasing wages in the four decades after that was based on union struggles to get employers to increase the wage. However, as the number of people represented by unions has declined and as union power has diminished, other forms of struggle have risen to demand wage increases.

Using the referendum process is working in the current context more often than it is failing. However, the field of battle—elections and the courts that are inevitably involved—is a realm dominated by the rich and powerful. It is a part of the capitalist state so it is not an easy win. But as evidenced by some of the struggles here, it is possible to mobilize people and win. The odds are rigged against us, but in a period of growing upsurge we will win more victories there.

The significance of the vote

While right-wing politicians took office in a number of areas, where people had an opportunity to vote on issues, even in the distorted environment of a capitalist election, their vote was a clear choice for worker rights.

Elections are bellwethers of where the people are in terms of consciousness.

Combined with the growing organizing activity by Walmart workers, fast food workers, car wash workers, airport workers, retail workers of all kinds, public service workers and many others, these minimum-wage votes signal the fact that we are on the cusp of a new stage. This is a moment when workers are beginning to demand rights in many ways—and fight to get them.

This is a moment that holds a lot of promise.