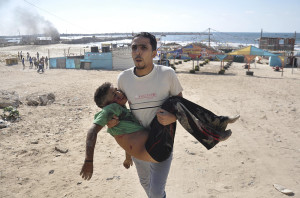 Israeli leaders never tire of telling the world that their military is the “most moral” in the entire world. Today, its navy deliberately targeted, shelled and killed four Palestinian children ranging in age from 9 to 11 years of age on a beach in Gaza, and then severely wounded three more children and a young man with a second shell as they fled in terror.

Spokespersons for the Israeli military regularly seek to cover up such atrocities by claiming that there was some nearby military target and the dead and wounded civilians were hit accidentally. But this attack took place just hundreds of yards from the al-Deira hotel, and was witnessed by many of the foreign journalists in Gaza who are presently based there, including from Reuters, the Guardian, Washington Post and NBC. Reporters from the Guardian and Washington Post, among others, stated that there was no Palestinian military activity in the area at the time of the attack.

The corporate media here routinely echoes Israel’s absurd propaganda depicting the Palestinians as aggressors and Israelis as victims. But the casualty figures as of July 16 illustrate the reality: on the Palestinian side at least 212 Palestinians killed and more than 1,500 wounded, the vast majority civilians; on the Israeli side, one killed, a man assisting the Israeli army.

Israel, despite its relatively small population, has one of the most powerful militaries in the world, thanks to the hundreds of billions in military aid provided by the U.S. , and has unleashed it once more against the largely defenseless population of Gaza. The Palestinian side has neither a navy, an air force, armored units nor any kind of air defense system, thus the extremely one-sided casualty figures. Despite Israel’s overwhelming military superiority, Palestinian resistance is continuing as it has for more than six decades of war and occupation.