Moves toward peace between two Koreas while U.S. beats the drums of war. 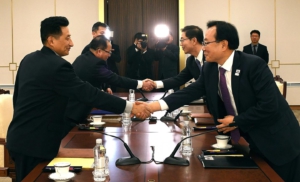 Recent peace talks between North and South Korea have highlighted one of the many mischaracterizations presented by the U.S. state and corporate media about Korea, The Democratic People’s Republic of Korea, or “North Korea” and the ongoing conflict. The idea that the United States is simply coming to the aid of their ally, South Korea, which is facing off against a hostile neighbor, completely obfuscating the real role of the United States as the only reason Korea has been divided in two to begin with. In fact, the majority of Koreans, North and South, desire peace and steps towards reunification.

In his yearly New Year’s address, North Korean leader Kim Jong Un extended an olive branch to the South by making reconciliation a central theme, and stated that the door was open “to anyone from south Korea, including the ruling party and opposition parties, organizations and individual personages of all backgrounds, for dialogue, contact and travel.” 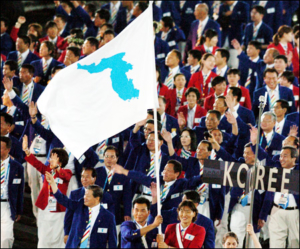 North and South Korean athletes marched together during the opening ceremony of the 2004 Summer Olympics in Athens; Photo – Korea Times File

The next day, South Korean president Moon Jae In’s administration contacted North Korea to schedule talks with high-level officials, which took place on January 9th. Ri Son-gwon of North Korea and Cho Myong-gyon of South Korea discussed a variety of initiatives, including the North’s participation in the Winter Olympics, which will take place in South Korea in February. Additional talks have now confirmed that athletes from the North and South will march together under one flag  – the flag of one Korea.

On January 9 both parties also agreed to resolve all conflicts between them with dialogue. It was decided to reopen a communications channel in Panmunjom, which will be used to coordinate further high-level military talks aimed toward “relieving the military tensions and creating a peaceful environment.” These talks are expected to cover South Korea’s decision on January 5 to delay the annual Key Resolve and Foal Eagle U.S.-South Korea joint military exercises,  alongside a moratorium on North Korea’s nuclear testing.

There was also discussion of the desire from both sides to reunite families separated by the division of Korea for decades, although no concrete plans have yet been made.

Yet these talks come amid a global context of extreme hostility—not between North and South Korea, but between the Korean people and the forces of reaction and imperialism, headed by the U.S. Empire. Exposing the nature of the relationship, former Assistant Secretary of State for East Asian and Pacific Affairs under the Obama Administration Daniel Russel told the New York Times about the peace talks: “It is fine for the South Koreans to take the lead, but if they don’t have the U.S. behind them, they won’t get far with North Korea, … And if the South Koreans are viewed as running off the leash [our emphasis], it will exacerbate tensions within the alliance.”

Despite being an example of disgusting chauvinism, this comment also illustrates how U.S. officials see South Korea. South Korea is an anchor in the Asia-Pacific for the U.S. military. There are over 80 U.S. military bases and 28,000 U.S. troops in South Korea. In the event of a war, control of the South Korean military is legally transferred from South Korean to U.S. generals. 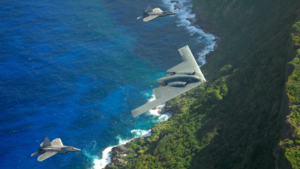 During the January 9 peace talks, the United States deployed three nuclear capable B-2 bombers to Guam.

Just days later, on the 15th, U.S. Secretary of State Rex Tillerson hosted a meeting of the same countries who fought on the side of the U.S. in the Korean War. The meeting focused mostly on ways to more strictly enforce the already severe and tightening sanctions. There was even discussion of using the Navy to enforce the sanctions – a naval blockade – which is an act of war. While the meeting was touted as an attempt at peace, the real deadliness of sanctions, and the conspicuous absence of representatives from North Korea, China or Russia made it clear that this was in reality an attempt to drum up support for war.

Not only does the trumped-up threat from North Korea serve the interests of the military-industrial complex, justifying a massive expenditure of resources and presence in the Asia-Pacific, but a faction of the U.S. ruling class actually believes that war with North Korea is inevitable and even desirable. General McMaster, the National Security Adviser, said the North Korea is “the greatest immediate threat to the United States… I think it’s increasing every day, which means that we are in a race, really, we are in a race to be able to solve this problem.”

Senator Lindsay Graham said, “If we have to go to war to stop this, we will… If there’s a war with North Korea it will be because North Korea brought it on itself, and we’re headed to a war if things don’t change.” Graham also relayed a conversation he had with Trump (The Today Show): “If thousands die, they’re going to die over there. They’re not going to die here — and he’s told me that to my face.”

This comes after Trump sparked outrage around the world by taking the podium at the UN and saying he would “totally destroy” North Korea.