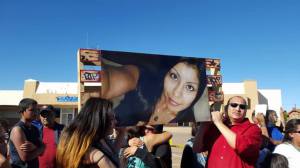 Originally published by The Red Nation.

Over 350 attendees stood for hours on the worn out pavement of the Winslow Police Department (WPD) parking lot to testify and hear about the life of Loreal, who was remembered as a loving and outgoing member of the Winslow and Teesto communities. Vigil organizers, in collaboration with the family, chose to hold the vigil in front of the WPD building to highlight the police’s culpability in Loreal’s death and to send a clear message to the WPD demanding justice.

On Easter Sunday (3/27), WPD Officer Austin Shipley identified Loreal as an accused shoplifter and proceeded to confront her. Over the next few minutes Shipley shot Loreal five times, letting her die in the street. WPD would later leave Loreal’s body there until 6 a.m. Monday morning, against Navajo customs and beliefs. Shipley later said Loreal attacked him with scissors, but at least one eyewitness has since come forward to publicly refute Shipley’s claim. Loreal was only 27 years old at the time of her death and a mother of an eight year old daughter.

Radmilla Cody, one of the vigil’s organizers, addressed violence against Native women like Loreal as a pervasive facet of border town life. “The loss of a Diné woman is a cruel and heavy toll on the health and future of Diné people,” Cody said. “It angers me that there is a false sense of harmony here.”

Several of Loreal’s closest friends and family shared stories during the vigil. “It’s hard to describe how much this hurts,” wrote Loreal’s aunt Sonya Yazzie. “Loreal was a beautiful, non-judgmental, and funny person.”

Native speakers and attendees also shared dozens of stories about mistreatment from the police ranging from intimidation to assault. For many, the vigil was the first time they were given a platform to grieve publicly and demand justice for the daily wrongs perpetrated against their community.

Loreal’s aunt, Floranda Dempsey, told the crowd “Speak up, don’t be afraid anymore. We extend K’e as family, so we all stand as a family, as one, to get justice for her. She didn’t deserve to be gunned down like that.”

Speakers also drew attention to the systemic violence Natives experience on daily basis in Arizona border towns like Holbrook, Winslow, Flagstaff, and Page. “The police constantly surveil, harass, and intimidate us. This violence is in no way isolated. For Natives, border towns are a dangerous place because of the police,” said Andrew Curley, one of the vigil’s organizers.

At the end of the vigil, Loreal’s cousin brother, Tyrone Yazzie, stated, “We are a military family, I used to wear a uniform and I would never disrespect that uniform. The officer that shot my sister has no respect for anything, nor his uniform.”

Navajo Nation President Russell Begaye attended the vigil and declared that the Navajo Nation would sue the City of Winslow if they don’t “rectify this.”

Although not requested by the event’s organizers, WPD cordoned off an area several square blocks in size for the vigil. Despite these accommodations, family, attendees and organizers pledge to hold WPD responsible for Loreal’s wrongful death.

The event ended with powerful calls for unity, truth and justice. Attendees lit and placed dozens of candles in the WPD parking lot to commemorate Loreal’s life and to serve as a visual reminder for WPD to answer for Loreal’s tragic death.

Several demands were articulated during the vigil, including:

– An independent review and publicly available report into the circumstance of Loreal’s murder, including witness testimony, forensic analysis, and other crucial items of evidence, as well as the WPD’s personnel records of Officer Austin Shipley.

– A U.S. Department of Justice (U.S. DOJ) investigation into Arizona’s use of racial profiling against the state’s Native residents, especially in border towns like Winslow, Holbrook, Flagstaff, and Page. We request that the U.S. DOJ investigate and enforce the Civil Rights Act of 1964 that prohibits discrimination based on race.

– Financial compensation to Loreal’s family from the WPD for her funeral costs and an official apology from the City of Winslow and State of Arizona for her wrongful death.

People from around the world took to social media with the hashtags #Justice4Loreal and #JusticeForLoreal to send prayers, condolences and solidarity with the vigil. Other hashtags like #MMIW (Missing Murdered Indigenous Women) and #BorderTownJustice were used to highlight gender and colonial violence.

In collaboration with Loreal’s family and the Native community in Winslow, organizers will hold a community meeting soon to discuss plans for further action. To stay up-to-date on developments, please visit therednation.org, go to The Red Nation’s Facebook page, or visit the Facebook event page, “Justice For Loreal – Vigil.”

The Red Nation is a coalition of Native and non-Native activists, educators, students, and community organizers advocating Native liberation. We formed to address the marginalization and invisibility of Native struggles within mainstream social justice organizing, and to foreground the targeted destruction and violence towards Native life and land.