On September 27, members of Unidad Latina en Acción met on the New Haven Green to fly homemade kites in honor of the 43 students from the Ayotzinapa Rural Teachers’ College who were “disappeared” in Iguala, Mexico in 2014. The students had been on their way to Mexico City to commemorate the anniversary of the Tlateloco Massacre in 1968 when local police intercepted their bus.

After gathering on the Green for a few speeches, the group of adults and children marched around the Green with the kites, each adorned with a picture of one of the Ayotzinapa 43. The procession drew the attention of people walking and driving by on their commutes, encouraging conversations with community members who were curious about the display.

In addition to remembering the 43 students, two more kites were flown: “We also create another kite dedicated to one of our members of Unidad Latina, Lazaro Diaz, who died a few weeks ago working in Connecticut. A guy from Guatemala, a young man, 23 years old, who died trying to live his dreams,” said John Lugo, a leader of ULA. The final kite was dedicated to “M.A.”, a student at Wilbur Cross High School who was picked up by ICE while attending a court date in Milford. “So right now he’s sitting in a detention center in Bristol County, close to Boston, and we’re creating a support group. For us, M.A. is another student who got disappeared by the state just because he was an immigrant, just because he was an indigenous person, just because he was a brown person who decide[d] one day to escape violence and to come in and have a better life,” Lugo continued.

This was not the first action in New Haven to commemorate the 43. In 2015, just a few months after their disappearance, the caravan of families of the students stopped in New Haven as part of a trip around the United States. They joined a protest on April 14, marking the 18th anniversary of the murder of Malik Jones by East Haven Police, and carried a banner that read “Su dolor, su rabia, su lucha. ¡También es la nuestra!” — “Your pain, your rage, your struggle. It is also ours!”

At that event, an organizer of the caravan Felipe de la Cruz Sandoval addressed the crowd: “Nothing makes us different. We are all brothers and sisters, and we are here to tell you that when human beings hold each others hands, we can make a difference. We have come here today with our heads held high to tell you the Mexican people are going to start a revolution, and that the moment is now! And just like in Mexico, I tell you that young people here in the U.S. must organize, and must start a revolution. The courage that comes from deep within our souls, that power will tell everybody that we can get together and fight for our ideals!”

From New Haven to Ayotzinapa and beyond, the struggle for justice and liberation continues across borders developed to keep working people divided. The workers’ struggle has no borders! 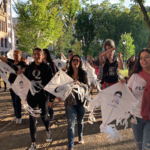 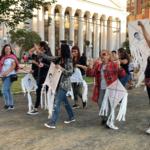 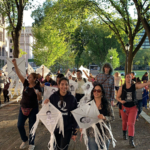 The parade starts around the Green. Liberation Photo. 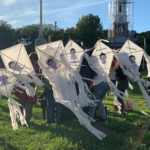 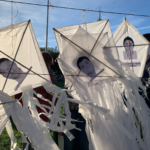 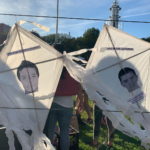 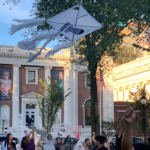 A kite flies during the parade with the image of Magdaleno Rubén Lauro Villegas. Liberation Photo. 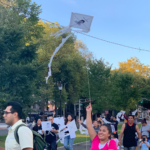 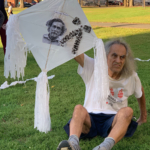 An additional kite honoring Mexican artist and activist Francesco Toledo, who died on September 5. Toledo started the international tradition of flying kites for the 43. Liberation Photo. 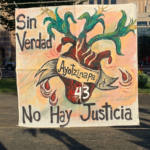 “Without truth, there is no justice.” Liberation Photo.