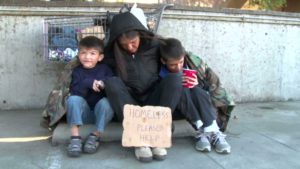 Ranked the poorest state in the entire nation, it is no surprise that New Mexico is ridden with every problem related to poverty. According to official statistics, one fifth of the New Mexican population lives beneath the state poverty level. In 2014, it was reported that approximately 28 percent of children live in poverty with Indigenous and Hispanic/Latino children being disproportionately affected. In the course of a year, as many as 17,000 people are homeless in the state with one third suffering from mental illness.

New Mexico also claims the highest rate of police violence per capita in the country with 6.23 police related deaths per million residents. This astoundingly high rate of police murder is demonstrated with consistent civil lawsuits, such as those involving the notorious James Boyd and Mary Hawkes cases that wind up costing New Mexican tax payers more than 30 million dollars.

The culture of state violence often manifests itself in targeting homeless individuals. Police are routinely encouraged to brutalize and incarcerate the homeless usually charging them with “trespassing” on private property. In other words, the homeless are criminalized for simply not having any money or their own place to go. This violence is heavily racialized with police disproportionately targeting Native people on the street.

“Police target those they perceive as the stereotypical ‘drunk Indian’ or ‘homeless Native’ when being neither by definition is a crime,” said Nick Estes, co-founder of local Indigenous rights group Red Nation. “While Natives are perceived as ‘criminals’ for just existing, our social conditions—such as rampant poverty, violence, genocide, mass incarceration, the breaking of treaties, the theft of our lands and life ways and police brutality—are not considered crimes.”

Driving around the state’s largest city, Albuquerque, one can see homeless individuals on just about every street corner (not an exaggeration), begging for change, food and even desperately needed water in the desert state. Many of these people are veterans, pregnant or have entire families they need to provide for. 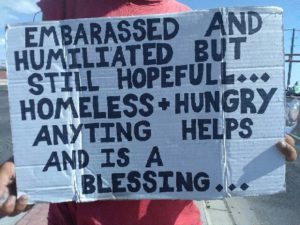 From the time we’re children, our capitalist educational system and media feeds us this narrative of the homeless as being lazy, unmotivated, drug-abusing people who have done nothing to contribute to society and somehow deserve the state that they are in. This is a blatant lie, as illustrated in the example of U.S. Marine Kenny Clover who is now on the streets.

“I used to own my own home. I was a technician with a journeyman’s license in the state of New Mexico. Then I came under investigation by the federal government for cultivating marijuana. They seized my property, closed my bank accounts, and tossed me in the hole for five years. Once I got out, nobody knew who I was.”

Despite serving in the U.S. military, having been deployed to several places during his service, Clover had his life turned upside down by the very state he worked for because of a “crime” that has been used by the elite for decades to incarcerate the working class masses and make profit for private prisons: drug possession.

When asked, Clover had a strong opinion on how the state’s politicians handle homelessness. “They don’t act, they react. They have their own agenda that they want to push. When the issue of homelessness comes up, usually in the form of a complaint from their constituents, they either pass legislation or take action with law enforcement. There’s no solution.” 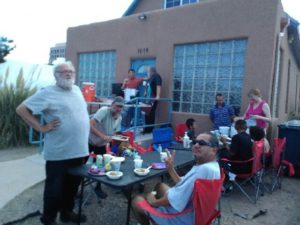 “They’re not hung up on what has caused them to become homeless. They have strong opinions about the system,” commented Lisa Crane, one of the event’s organizers. “I’ve heard many of the homeless tell me that they’re well aware of the game that is our political system and how the politicians that are offered to us really don’t care anything about people.”

“The elite have managed to commodify the homeless,” Crane added. “Certain organizations make money by feeding and housing them and in that way it creates a demand for homeless people.”

Gene Candelaria, another organizer, also remarked on the state government. “The mayor himself has said that it costs taxpayers less to house people than to leave them on the streets. So why are they still there? They [politicians] come out with 311 signs and work initiatives that solve nothing but look good for the mayor. We need real change. We need housing and case workers.”

The people in New Mexico are ready for radical change. They are tired of the same old pattern where the ruling elite make promises and then pass legislation and implement policies that benefit the capitalist businesses and landowners at the expense of the working people’s very lives.

“The current system, which privileges profit over Native lives, needs to go. We need a new system, one built from the ground up, where Native people are treated as human beings and who rightfully belong to this land,” Estes concluded.

The capitalist system profits from the oppression of women and communities of color by low wages, targeting them for mass incarceration, and consistently relegating them to systemic poverty. In a socialist system where land and the means of production are collectively owned and the wealth is distributed equally, the need to oppress groups of people for profit is eliminated. In a socialist system, healthcare, housing and food are rights of the people, not commodities for those who can afford them.

The Party for Socialism and Liberation is running Gloria La Riva as our presidential candidate in the 2016 election. Healthcare, housing and food as human rights, as well as the dismantling of mass incarceration and racist police brutality, are part of our platform. However, radical change for the people will take more than voting. Join the PSL for a people’s revolution beyond the elections!