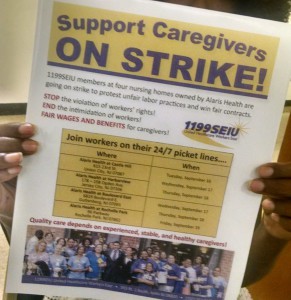 The workers at four nursing homes in northern New Jersey have voted to call a three-day strike against Alaris Health to protest unfair labor practices and to win a fair contract. The strike is to take place Sept. 16-19. These workers are organized by 1199SEIU United Healthcare Workers East.

The success of this strike is pivotal for all low-wage workers fighting for a better life.

“Over the past 18 years, during most of that time, the direction for low-wage workers has been improving in the last couple of contracts, winning a bit above minimum wage with health benefits and a pension,” explained Neal Gorfinkle, political organizer with 1199 SEIU.

“But in the past year or two, certain employers have been pushing back—called Omni through 2010, now Alaris Health—who we had a serious knock down fight with to win a contract two years ago.”

These workers, who are housekeepers, dietary aides, certified nursing assistants and nurses, understand that their action now is a watershed event to push back the attacks on labor—and they are up to the task. Many of them have two or three jobs to support their families, and if they accept a substandard contract, the impact will reverberate throughout other organized low-wage workers including those struggling to win union recognition in fast food and retail.

“We don’t want to see those who have been moving forward move backwards, as it could impact the fight for the $15 minimum wage,” said Gorfinkle of the relationship of this strike to the recent moves by fast-food workers around the country.

“Our message is that workers in this situation cannot win by themselves; we need broad and active support. Our fight is a broader fight with fast-food workers and retail workers to do something about the horrendous income inequality,” concluded Gorfinkle on the need to come out and support the picket lines.

Or join the workers on the picket anytime day or evening: