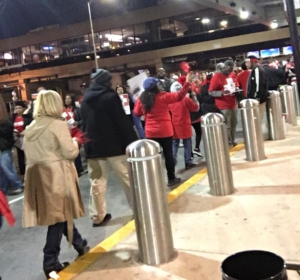 Airport catering workers across the country protested on November 26, after American Airlines refusal to meet the workers’ demands for health insurance. In Philadelphia, over a hundred workers organized by the union Unite Here and their supporters marched in front of the American Airlines terminal. Protesting workers chanted, “No Healthcare, No Peace! No Justice, No Peace!” and “Shame shame shame on you” to keep up the sharp and determined energy of the action, which culminated in a civil disobedience action and 39 arrests.

At the protest in Philadelphia, Liberation News spoke with activist Kendra Brooks – a longtime activist and councilwoman-elect who recently won a historic seat on city council on the Working Families Party ticket. “Today is about making sure that all workers of American Airlines have healthcare insurance. People that work 40 hours a week should not have to make a decision between food and healthcare,” said Brooks, “We need to make sure a billion dollar industry is taking care of all their employees.”

American Airlines has refused to take responsibility for the ruthless exploitation of its workers by passing the blame to intermediary companies, such as LSG Sky Chef, through which workers are hired. Labor concerns should be taken up with that company, the airline cynically argues, and it is better to leave American Airlines out of it. This is just one case of a running list of companies subcontracting their labor through other companies (Aramark, Bon Apetit, Sky Chef, etc.), thereby obfuscating the aims of any labor organizing. But people see right through this. “The protest is against American Airlines. They have refused to move on this request from their employees for healthcare, so they’re the ones who chose this protest. We were out here two months ago protesting for the same thing. And until they decide to do what’s right for their employees, we will continue to show up in support of the workers of American Airlines to make sure they have their health insurance,” said Kendra Brooks.

The brave fight by airline catering employees for better benefits and conditions is an inspiration to all workers who want to collectively stand up against their bosses and make their voices heard.