As snow fell on so-called “Presidents Day,” Feb. 18, hundreds of people gathered at Boston City Hall Plaza to rally and speak out against President Trump’s declaration of a national emergency in order to bypass Congress and secure funding to build his racist border wall.

The rally began with a lively welcome from the Boston Area Brigade of Activist Musicians  as people huddled together and chanted “No hate, no fear, immigrants are welcome here!” To start off the program, PSL member Nino Brown recited the poem “Power” by Audre Lord, and reminded the crowd “we have learned from comrade Audre Lorde that all of our oppressions are interlocking and connected, and solidarity is the only way we can all win liberation.”

“Each of us arrived here because we were called, called by the sole knowledge that to wall out other people is wrong,” Reverend Wendy Von Courter from the Unitarian Universalist Church told the demonstrators. “Right now there are people facing prison for leaving water in the desert for people who will die without that water, and we will not be silent!”

Reverend Andre Bennett from Zion Baptist Church followed her saying :“Right now there are children in Massachusetts who are not going to school because they fear that ICE will rip them from their families. We will not be silent!”

Brown also drew attention to the so-called Democratic Party “Resistance” and their complicity in Trump’s regime. Brown asked “Where is the resistance? In my opinion, we are the resistance! The same Democratic party that said ‘Trump would not get one cent gave him $1.4 billion dollars! In Boston Public Schools we have thousands of students who are homeless. All across this country, we have hundreds of thousands of students who are homeless – why is that not a ‘national emergency?’ We also see that year in and year out at least 1,000 people are murdered — are lynched — by the police, but that’s not a ‘national emergency!’ We have children in Flint, Michigan who still don’t have clean water, but that’s not a ‘national emergency!’ We have Puerto Rico being strangled by this PROMESA organization which is unelected, which is dictating to Puerto Rico how they are to use their funds. We need to call out Trump’s fake emergency! An oppressed people cannot remain oppressed forever, it is a law of history, oppressed people will rise up.”

Next, Gustavo Barceloni of the ANSWER Coalition spoke to the crowd about his family’s immigration experience and the need to fight Trump’s neo-colonial war on Venezuela. Barceloni told the crowd, “I was born in Brazil, my parents were victims of poverty stemming from the economic hangover of the military dictatorship of the 1980s. So we had to leave. We went to the U.S. where they heard stories of a better life. War against our people is profitable. What I did not know until I grew up here was that the American Dream is a sham for so many, that the country my parents sought a better life in staged over 50 military interventions in Latin America to control their natural resources and overthrow leftist governments. In the aftermath, we see the exploited and oppressed at the border but we must also see a war in action.”

Roxana Rivera of SEIU 32BJ spoke to the crowd: “President Trump’s declaration of a state of emergency is not only reckless but it violates the very heart of our Constitution. The real emergency is that children are being ripped from their families, DACA and TPS recipients who have called this country home for years will be faced with an impossible choice of going back to their unstable homelands or living in fear of being deported. The real emergency is the heartless government shutdown. Working people were robbed of their paychecks, including thousands of contracted workers represented by our unions who will not see a dime of back-pay.”

Following this, the Justice4Siham campaign called in Siham Byah, a former 20 year resident of Massachusetts, single mother, Moroccan refugee, and activist to speak about the ways in which ICE has torn her from her 9-year old son Naseem. Byah said that what happened to her and her son “must never become the norm or accepted in this country” and “people are displaced and fleeing not because they want to, but because of American policies and racist, imperialistic, capitalistic policies. Those people are fleeing violence created by America. We need money for jobs and education, not for war and deportation!”

Arely Diaz of the FANG collective drew attention to a hunger strike at Suffolk County House of Corrections that began on Friday. Diaz said, “On Friday, 72 ICE detainees of Suffolk County Corrections, based in South Bay, Boston, launched a hunger strike demanding an end to abuse and inhumane conditions. This hunger strike is continuing right now and people are being thrown into solitary confinement for striking. They are destroying property and threatening to put more people into solitary confinement. We ask you to call in and hold Sheriff Tompkins accountable for the inhumane treatment of the people in Suffolk County. We ask that you tell them to end all agreements with ICE right now.”

Afterwards, Cosecha members spoke about their drivers license campaign to ensure that every person has freedom of movement in the state of Massachusetts, so they can “drive their children to school [and] go to work without fear of deportation.”

All progressives and revolutionaries must build chains of solidarity to defend themselves from capitalism, and to ultimately sweep it into the dustbin of history, where it rightfully belongs. ¡Adelante! 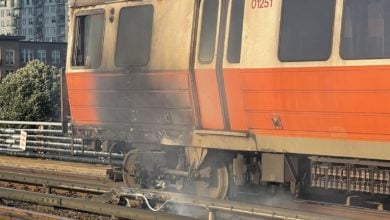