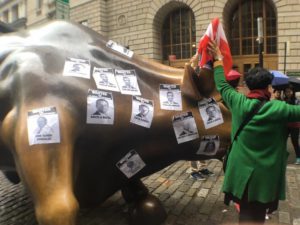 The group marched to the famous Bull of Wall Street, a symbol of corporate greed and U.S. imperialism in the heart of corporate America and covered it with Puerto Rican flags and “Wanted” posters.

On the rainy early morning of September 30, a contingent of Puerto Rican activists gathered to protest the first official meeting of the PROMESA board at the American Indian Museum in downtown Manhattan.

The board was created back in June, when Congress passed the Puerto Rico Oversight, Management, and Economic Stability Act, aka PROMESA. The bill was marketed to Puerto Ricans as the only way to help Puerto Rico restructure its debt and prevent the island from being sued for defaulting on bond payments.

The bill, which President Barack Obama signed into law, is in reality a thinly veiled act of old school colonial rule. PROMESA creates a fiscal control board of seven members (“La Junta,” as it’s known in Puerto Rico) that will soon control Puerto Rico’s budget, laws and finances without being accountable to the island’s government.

“We came out for the people of Puerto Rico, for the 3 million plus people that these decisions would affect. Their dissatisfaction has been demonstrated throughout the island and we were here to demonstrate within the belly of the beast,” said Puerto Rican organizer Max Ruiz Martinez of the ANSWER Coalition.

The protesters gathered outside the buildings lower entrance, berating la junta members as they smugly walked into the meeting. The people chanted, sang, and held signs with messages like “Hedge funds promote human suffering,” and “Socialist Independence for Puerto Rico.”

A few protesters attempted to disrupt the Q&A-style public meeting and were thrown out. Nonetheless their voices were heard. The group marched to the famous Bull of Wall Street, a symbol of corporate greed and U.S. imperialism in the heart of corporate America. They covered the bull in Puerto Rican flags and “Wanted” posters for each member of la junta with their crimes reading “Wanted for Colonial Dictatorship.”

“An immense feeling of solidarity captivated us, in our struggle. A struggle against colonialism a five century long struggle that will continue until we are free,” Ruiz said of the experience.

The United State’s exploitative economic policies and centuries of colonialism has drained the island of it’s wealth. Currently, 45 percent of Boricuas live below the poverty line and 40 percent of households with minors rely on food stamps. PROMESA will plunge Boricuas deeper into poverty by cutting public goods and welfare to pay back its $72 billion debt. The minimum wage for those under 24 will be lowered to a mere $4.25 an hour, pensions will be cut, and public services will be shut down.