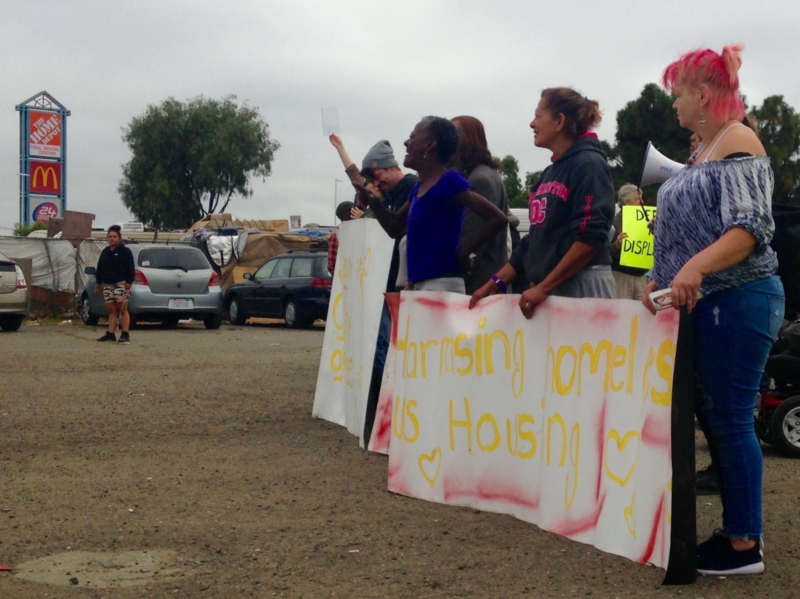 On Friday, July 12, in Oakland’s Fruitvale neighborhood, community members stood victorious against a racist, xenophobic landlord’s attack on a curbside community, as residents describe themselves. Residents, who live in RVs parked across the street from a Home Depot, have also been targeted by the city of Oakland.

Local slumlord and Trump supporter Gene Gorelik posted on a Facebook page that he would offer each resident $2,000 to relocate to another lot by Friday night. In a city where average rent for a one-bedroom apartment is $2,636, residents were disgusted by this offensive and degrading “offer.”

Then, early Friday morning, Gorelik stood on a boom lift and chanted into a bullhorn, “Free money! Free money!” Gorelik claimed his goal was to “save” Home Depot, a multi-million-dollar corporation already working with the city to forcefully evict the curbside community residents near the store.

Gorelik’s disgusting performance puts on display the horrific, dehumanizing character of housing under capitalism. Landlords profit from a housing market that forces people to live on the streets through high rents and property rights backed by police terror. In cities like Oakland, poor and working people are being forced out of their homes to make way for wealthier people who can afford to pay the landlords more. This displacement has disproportionately affected Black and other nationally oppressed communities. With nowhere else to go, many Black and Brown people are forced into homelessness or limited housing like the curbside community in Fruitvale.

And the problem is not a few bad landlords like Gorelik. Renting is inherently exploitative because it turns housing, something we all need to survive, into an opportunity to extract from those of us who lack the capacity to buy a home to enrich the already rich. Homelessness is a symptom of capitalism, a system that puts profits before people — the system that enshrines the landlord’s right to profit in the first place.

This Oakland curbside community’s struggle for dignity and respect is not limited to the clownish attacks of a single landlord. At Home Depot’s request, the city of Oakland plans to force residents to leave the lot by December. We must continue to fight!

Curbside community resident Elizabeth Easton previously owned a home she and her family built from scratch that the city of Oakland destroyed, forcing her to move to an RV across from Home Depot. She told Liberation News, “We need help just staying. I’m 66 years old — It devastated me for them to tear my house down. I’m afraid of losing [this] one — and I don’t wanna do it. So, all the help we can get, we need it.”

We must stand in solidarity with people on the front lines resisting continued gentrification of our communities. Let’s fight for a society where housing is guaranteed, and our communities aren’t terrorized and cut off from resources for the purpose of making the rich even richer. Instead, let’s create a world where we can thrive — this world is possible, and we’ve got to fight to make it reality.