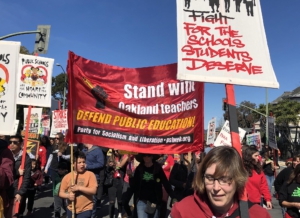 The Oakland teachers went back to work today after being on strike for seven days for higher wages, smaller class sizes, an end to school closures, lower caseloads for support personnel and to halt the spread of charter school privatization.

Oakland teachers demanded a 12 percent raise and won an 11 percent salary increase with a three percent bonus. Teachers had demanded that class size be decreased by two district wide and by four in high-need schools; they won reductions in class size next year by one in high-needs schools followed by a reduction in class size by one in 2021 at all schools. Oakland teachers demanded more counselors, resource specialists, psychiatrists, speech therapists and nurses, and won slight case-load reductions for all except nurses.

Teachers demanded an end to school closures and won a resolution that will be introduced by the Board of Education president to put a five month pause on school closures and consolidations. It is important to note that the closures and halt to charter school development were political demands that will need to be fought for outside of the contract struggle itself, but were a key demand of the teachers’ union.

Although the new contract does not resolve all the teachers’ demands, on March 3, 70 percent of the teachers’ union members participated in a vote on the tentative agreement with 64 percent voting to approve.

For many of the educators, the victory felt somewhat bittersweet because they were so committed to winning more than just a raise. The gains won for class sizes reduction are small and, while many support personnel will see a caseload reductions, nurses will see no relief.

However, it would be a mistake to view the contract as a defeat. For one, the district was forced to offer concessions as a direct result of the strike. The district had been sticking to an incredibly low raise offer and refusing to budge at all on the other demands. After the strike, the district was forced to offer an 11 percent raise and a three percent bonus as well as some movement on the other issues. That should be recognized.

As a consequence of the preparation for the strike, the teachers were incredibly well-organized. That enabled them to carry out an effective strike that involved more than just the union members. The union gained broad community support as they reached out to parents, students and the communities they serve. Each day only two to three percent of students attended school, and 95 to 96 percent of educators honored the strike. Community organizations were asked to adopt a school and organize their constituents to join the picket lines on particular days and times. Teachers in surrounding districts organized a sickout on the sixth day of the strike to boost the picket lines. During the course of seven school days over a two week period, the union organized massive rallies and marches highlighting the need to defend public education and fight for the needs of teachers, students and communities. Union members became union organizers. Teachers, students and parents learned a great deal through the course of the struggle. As a result, the union is in a much stronger position now than they were just months ago.

To protect public education in the long term, the struggle will need to continue. The school board, allied with the billionaire interests, is trying to privatize public education. They are determined to cut programs and close schools rather than restructure the district budget to cut wildly inflated administrative costs and protect the resources that truly serve students.

The damage done by decades of policies undermining public education cannot be undone in a single strike. But over the last two weeks, the Oakland teachers made important gains in strengthening their union and in winning concessions from the district. Following on the heels of the successful strike in Los Angeles and a year of strikes throughout West Virginia, Arizona, Colorado and more, the teachers’ struggle continues to confront the attacks on public education with fortitude and unity.