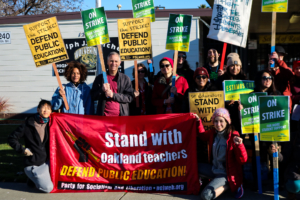 Entering its fourth day on Feb. 25, the Oakland teachers’ strike is stronger than ever. Despite heavy rain, the educators rallied and marched throughout the day. At a press conference that evening, educators and parents reported that 95 percent of union members continued the strike and student attendance remained low at 3 percent.

After an anti-union campaign of misinformation and manipulation, Oakland Unified sank to a new low calling parents threatening to punish students who did not attend school. They were forced to publicly rescind that information. No students will be punished for supporting their striking teachers –who are striking in the best interest of the community.

On Feb. 25, State Superintendent of Schools Tony Thurmond joined the two sides at the negotiating table in an effort to move the bargaining efforts along. The union reacted positively to his intervention.

OUSD has repeatedly claimed they just do not have the money. Also, in an effort to undermine the teachers’ struggle, state fiscal oversight trustee Chris Learned released a written statement this week threatening to veto any agreement that included a 12 percent raise. But Learned and OUSD are both in the wrong. OUSD has for the past four years egregiously increased its spending for administrators and consultants. In other words, it spends a large percentage of its budget on personnel that are far away from the students and classrooms while cutting those closest. From 2014 to 2017, OUSD increased spending on administrators and supervisors by 69 percent! That is just one example of where to find the funds to meet the unions’ demands.

The Oakland Education Association teachers began their strike on Feb. 21 after working without a contract for a year and a half. Their demands include lower class sizes, basic resources like full time nurses and counselors, and a 12 percent retroactive pay raise to combat the increasing cost of living throughout the Bay Area. 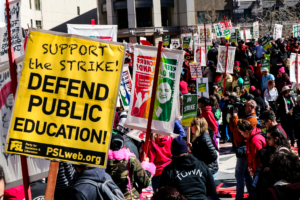 On the first day of the strike, nearly 2,000 strikers and supporters gathered in front of Oakland’s City Hall, filling Oscar Grant Plaza after picketing each of the 86 individual Oakland Unified schools the first morning. The next day’s rally at Defremery Park was even larger. The outpouring of support from the community and fellow workers has been truly incredible. Parents and supporters are organizing multiple solidarity campaigns, while the Bread for Ed Campaign is providing food to striking teachers.

OEA representatives and community members have worked tirelessly to set up a network of “solidarity sites” for parents who may not be able to take time off of work to either keep their child at home or attend the protests. These various community buildings are staffed by volunteer OUSD teachers, and still offer academia and various arts while the strike continues.

The teachers’ demands are similar to those of the nine educator strikes over the past year in other public school districts from Los Angeles and Denver to West Virginia. So-called education reform over the past three decades has purposefully underfunded public schools and promoted privatization nationwide through the establishment of for-profit charter schools.

In the Bay Area, where rents have skyrocketed, public school teachers are often unable to even live in the community they serve due to the high cost of living and low wages  causing a high turnover rate among teachers. Oakland Unified teachers receive a starting salary of around $46,000 a year. The median rate of rent in Oakland is $3,035 a month according to rental platform Zillow.

Oakland Unified high school teacher and picket organizer Sean Gleasom attributed the district’s instructor retention crisis to the excessive cost of living in the area: “There’s not a lot incentivizing teachers to stay in Oakland. There’s financial incentives to not teach in Oakland.”

Union members are also focusing their strike efforts on campaigning for their students right to access foundational necessities like full-time school nurses and trained psychological and academic counselors. According to the OEA, Oakland Unified only has 21 nurses available for the needs of 37,000 students. Since the 2016-2017 school year, Oakland Unified has procured at least $21 million in state and local funding, leading union members to ask just where that money went.

Former OU student Jazmine Cisneros expressed her concern over the medical needs of students not being addressed by the district: “When I was in school, I never knew we had a nurse, if we even had one. At my sister’s school the nurse is maybe there two or three times a week for a few hours. So, what happens if a kid gets hurt when there’s no nurse there?”

According to the Oakland Post, “at one board meeting, the district was getting ready to lay off 140 school support workers while on the same agenda it was considering a petition to open a new charter school.”

This privatization and monetization of education must stop. Taxpayer dollars should not be used to fund for-profit charters but should be rerouted to public schools, to create community-school environments and to pay educators what they deserve.

Members of the Party for Socialism and Liberation have been out on the picket lines and at rallies every day of the strike. We encourage everyone who can to join the movement for public education and come out to support the Oakland teachers’ strike.

Updates on the strike and details on actions.