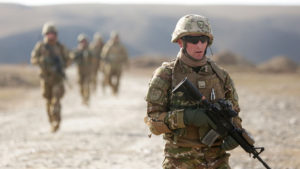 This week, Obama pledged to meet the goals of the Paris Climate Agreement to keep temperature rise below 1.5°C while at the same time ordering the Pentagon to plan for national security issues arising from climate change.

These two paths may seem contradictory. How will the Pentagon, the biggest unregulated polluter on the planet, alleviate climate change impacts?

The U.S., although it “pledges” to meet the goals of the Paris Agreement, is doing little to make any meaningful shifts to achieve those goals. The U.S. is the highest producer of greenhouse gas emissions on the planet when you look at U.S. consumption levels. If every country consumed as much as the U.S, it would take over five planets to sustain us globally. Capitalism as a system is incredibly inefficient and wasteful, with the U.S. throwing away 40 percent of food produced and enshrining the practice of limitless production of consumer goods while crucial infrastructure crumbles. Planned obsolescence, the unsustainable practice of purposely producing things to not last in order to sell more, is the unspoken law of capitalist production today.

The climate crisis cannot be solved under capitalism. Capitalism’s solutions are to hope that caring entrepreneurs move to sustainable methods and create piecemeal solutions. Meaning no significant change, since capitalism’s expand-or-die scenario forces ever increasing quarterly returns in order to stay in business while sustainable production would require a reversal of that scenario. We are out of time to wait for incremental change. We must act now for today’s children to have a livable planet in their future.

The Pentagon fix is simple and is clearly designed with a business-as-usual model in mind. As the world spirals into chaos with mass displacement due to sea level rise, extreme weather and drought-driven starvation, the Pentagon will protect the “haves”—the imperialist ruling class—from the “have-nots” of the world, while defense contractors and weapons manufacturers make bank with the expansion of wars over scarce resources.

The Pentagon solution is summed up in Peter Schwartz and Doug Randall’s An Abrupt Climate Change Scenario which states, “As global and local carrying capacities are reduced, tensions could mount around the world, leading to two fundamental strategies: defensive and offensive. Nations with the resources to do so may build virtual fortresses around their countries, preserving resources for themselves. Less fortunate nations especially those with ancient enmities with their neighbors, may initiate in struggles for access to food, clean water, or energy. Unlikely alliances could be formed as defense priorities shift and the goal is resources for survival rather than religion, ideology, or national honor.”

At the UN National Assembly this week, Bolivian President Evo Morales pointed out the real problem stating, “Capitalism is the worst enemy of life and humanity, and of future generations; it destroys Mother Earth; concentrates wealth the hands of a few; and generates extreme poverty,” he told global leaders. “If we don’t build another system soon for society, we will replace sustainable development with sustainable death,” he warned. 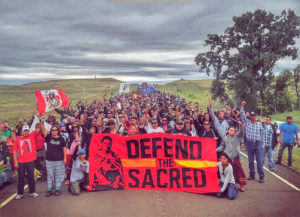 The protests on the Standing Rock Sioux reservation against the North Dakota Access Pipeline provide hope. Native peoples have come together from across the continent to stand against the corporate plunder of land and water and stop the ongoing march of Big Oil against the needs of people and the planet.

We need dozens, hundreds, a thousand Standing Rocks around the world to end the plunder of the planet by capitalism. The people of the world need to take control of the resources to build a sustainable society for everyone’s survival, not just the survival of the 1% wealthiest. Building walls and more bombs is the antithesis of a solution at a time when cooperation and a pooling of resources across borders is the only salvation for humanity and all living things. What is needed now more than ever is socialism.