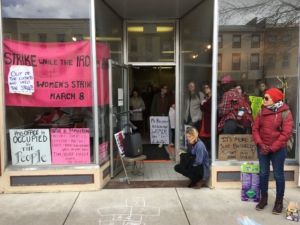 On March 8, a crowd of over 50 protesters in Geneva, New York, (population 13,261) occupied the office of Republican Congressman Tom Reed. The occupation was part of a women’s strike organized in connection with International Women’s Day by the Geneva Women’s Assembly.

At noon that day, over three hundred people rallied in front of the congressman’s Geneva office. A hundred students took the streets in a march to the office from nearby Hobart and William Smith Colleges. Students from the local high school also walked out to join the demonstration. At the rally, chants, songs, and poetry accompanied speeches on transgender rights, the situation facing Palestinians, the immigrant workers’ struggles and economic inequality.

The GWA provided food for the crowd. It also made a strike fund available for anyone who needed it. All organizing materials — banners, flyers, radio announcements — were carried out in English and Spanish. Although a significant portion of city residents are native Spanish-speakers, this was the first time political organizing had reached out to them.

Prior to the women’s strike, local officials contacted the GWA to try to convince them not to demonstrate in front of the Congressman’s office. They were not successful. Instead, on the day of the event, police visited local businesses to warn them about the impending demonstration. Yet the police misjudged the community. As the owner of one small business said, “We know all about the women’s strike. We are with them!”

Two hours into the demonstration, the GWA announced that the congressman’s office was public space, which meant that it belonged to the people. The doors were opened and a few people walked in. After a brief pause, and more encouraging words from a GWA speaker, scores of people followed. The Geneva office staff notified the congressman, and his Washington, D.C. office issued a notice announcing that his Geneva office was occupied by protesters.

For several hours, people sat on the floors and furniture discussing the community, country, and world they want to see. They came up with suggestions for education, housing and community development. They agreed to an end to militarism and bigotry and the importance of arranging lives and work for the common good.

The occupation ended with plans to continue the work of the GWA. The next day, the protest was featured in a full-color story in the local paper, covered in a number of regional papers, and discussed in multiple radio stories. The GWA later celebrated the successful strike and occupation with a zine that it distributed in the community.

This is not the kind of story about rural America that the national media covers. To deflect attention from the class war raging across the United States, the capitalist media tries to focus attention on cultural differences. One such difference is between urban and rural voters. Publications like the Washington Post treat concerns over poverty, unemployment, and government corruption as indications of rural difference, even backwardness. They treat rural United States as if it were exclusively white and conservative, erasing the diversity of rural life in order to make cities seem singularly multicultural and multicultural life wealthy and privileged.

As anyone struggling to get by in the capitalist economy knows, concerns with economic inequality and a hostile state are what rural and urban poor and working people have in common. The true division is between workers and bosses, the un- and underemployed and techno-managerial elites, the 99% who do the work and the 1% who reap the rewards.

The rural United States is ripe for progressive organizing. While most urban areas have multiple groups, organizations, and events already actively configuring the political space, rural areas often lack any organized resistance (which is why some voters in rural areas supported Trump in the last election — his campaign rhetoric offered them an alternative to the smug, elitist, billionaire-focused Democratic Party). Because of this political vacuum in rural areas, socialists have an opportunity to reach new people.

In small communities, small groups can make a difference. When a community is not used to seeing protests, 10 or 20 people out in the streets seems like a lot. Eight people at a meeting is a huge success. Three hundred in the streets is a seismic event.

Small town newspapers are hungry for stories so they are more likely to cover protests and organized events. They are also more willing to use the press releases provided to them as the basis for their stories.

Since the women’s strike, the Geneva Women’s Assembly has focused on the poisoned soil in Geneva’s working class and immigrant community. For over 20 years, the city and the state have known that an old foundry emitted toxic levels of lead and arsenic. The government knew that these contaminants had settled into the soil in the surrounding residential area, including near schools, but they said nothing and did not inform the people who lived there. Now, the area has been designated a Superfund site, but the city has prioritized clean-up focused on development, while the residents continue to live with unsafe levels of lead and arsenic. The impact is deadly. Children test high for lead in their blood, which leads to a lifetime of health and behavioral problems. Women miscarry. The health effects of decades of exposure to lead and arsenic are enormous.

The city and the state have tried to separate the residents, to get them to focus on their individual situations, property values and particular interests. But the GWA has changed the conversation pulling residents together as a community through the Foundry Action Committee with a common concern for justice.

To this end, the GWA regularly goes door-to-door in the impacted areas distributing informational flyers and inviting residents to organizing meetings. The group continues to protest the city council, calling out the city for putting the interests of business over the lives of the people. GWA activities are followed avidly by local news outlets, ensuring that the community knows that there are people fighting for justice for foundry-zone residents.

Working with residents, the GWA put together a list of demands. These include demands for an apology, an investigation, free access to gardens and soil, free access to healthy food, regular updates in Spanish as well as in English, concrete efforts to reach out to tenants and not just owners, the elimination of taxes on affected properties, and free health care for all residents.

The struggle is ongoing. What’s key is that in rural areas, in small communities, a few organized socialists can make a huge difference.