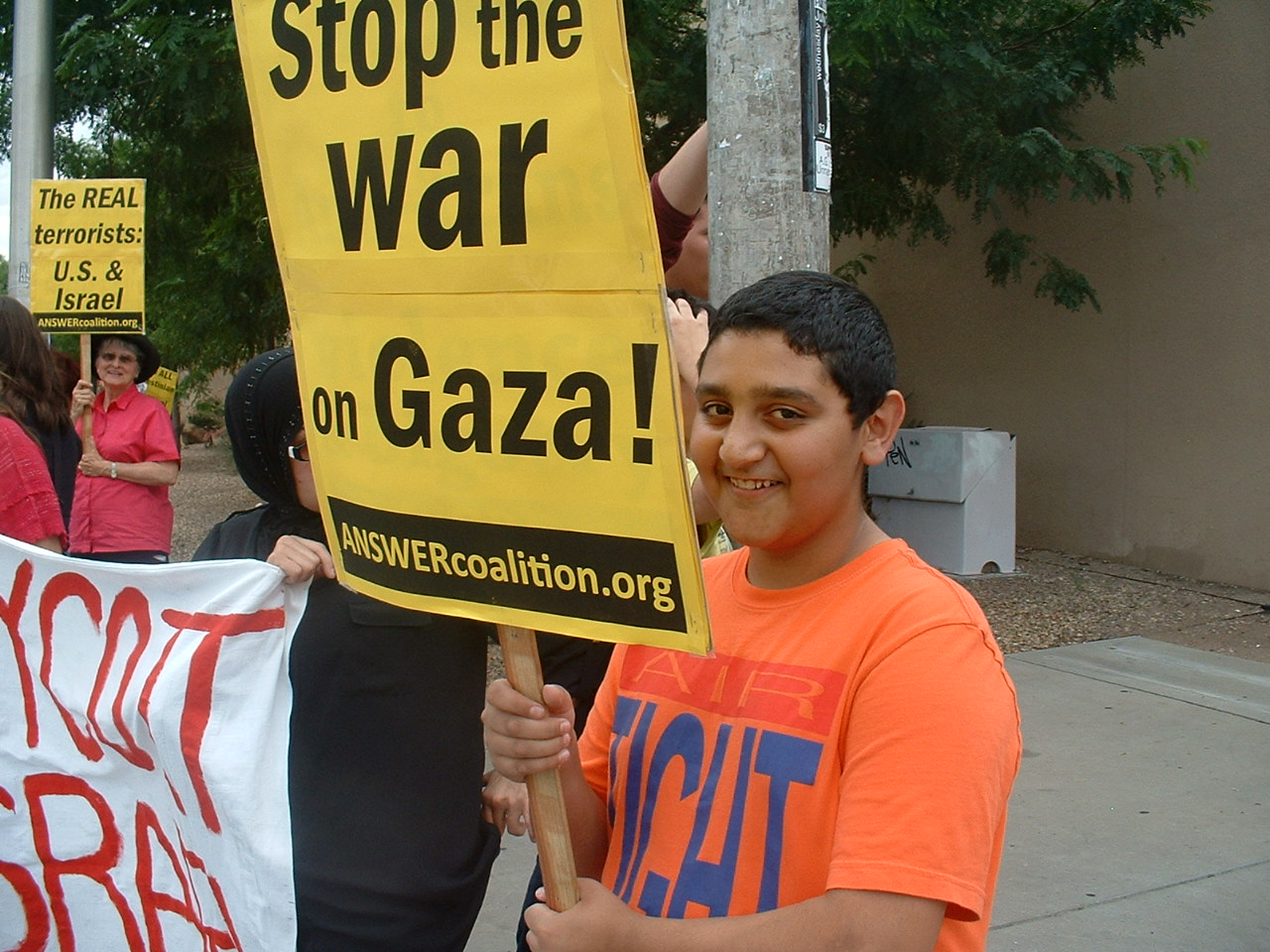 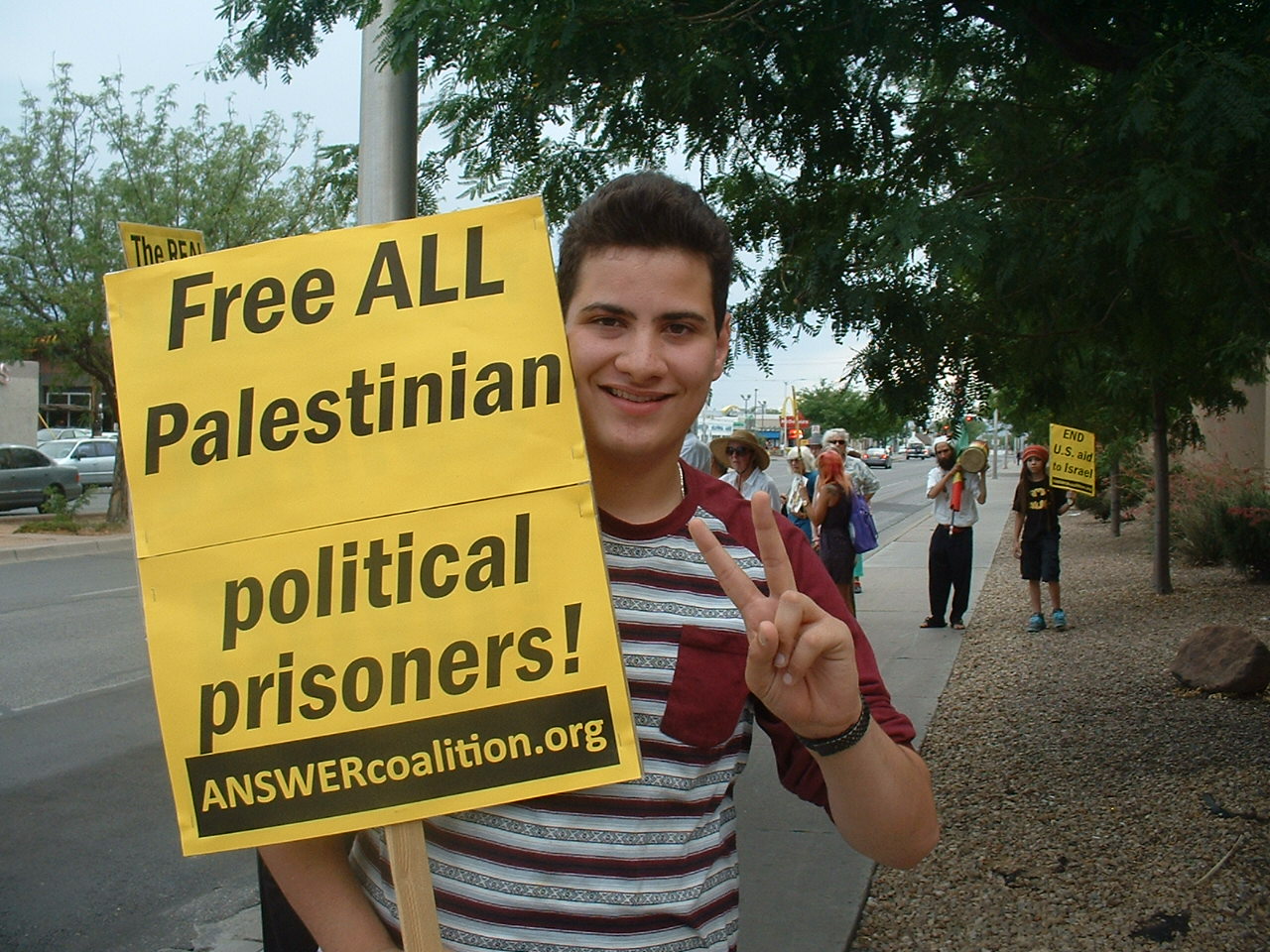 What would 12-year-old Atah Omar do if he were “king of the whole world?”

“I’d stop the war. I’d make everyone be able to be free and accept each other’s religion and end repression.”

Palestinian-American youth and children were a dominant feature of Albuquerque’s protest against the war in Gaza on July 20. Atah was born in the U.S. He has over 60 cousins and other relatives who live in Palestine.

“I wish I was there to help them out with something. I’d give them food, water, all the stuff they need to survive.”

His mom shows him videos of Palestine on Facebook, and she wants to take him there sometime to see where the family is from. Atah says “My heart thinks the kids there must be really scared and trying to get to shelter. I hope they get free and stop the war.” He wants to ask the Israelis “Why are you doing this?”

Haneen Khatib, age 25, was also born in the US but has family in Palestine. The conflict has been talked about at home her entire life, “as soon as I was old enough to understand what war is and what bloodshed is.” The issue permeates her whole life and being. “All of my school articles and essays have been about Palestine,” Haneen says. Her heartbreak is evident when she says “Not one person who has the power to do something has done something.”

“One thing has been bugging me,” says Haneen. “The people who are anti-Palestinian: look at facts, because facts don’t lie. Whenever you see barely any Israeli civilians dying, and hundreds of civilians dying in Palestine, obviously something is wrong. Whenever you have Israelis on top of a mountain cheering as missiles hit Gaza and kill people, something is wrong. If you can’t see that, you’re just as bad as they are.”

Haneen is concerned with peace, not borders. “If the Israelis ever decided they want peace, I’m 150% sure the Palestinians wouldn’t throw missiles and try to get them out of there. They can coexist. To me, it’s not about the borders, it’s about the lives that this costs. That’s heartbreaking.”

Munther Javer, age 17, says his family talks about the Israeli-Palestinian conflict all the time. He was born in Palestine and moved to the U.S. at age 5. “My whole family is really engaged in this issue not just because we are Palestinian, but because we’re people who believe in human rights. That’s what this issue is about. If you look at the diversity of people who are pro-Palestinian, it’s really vast. People are looking more at the human
rights perspective.”

What’s the solution? “I think we’re at the point where there are all these ideas- maybe this or that will solve it – like the two state solution. Everyone still focuses on that, and I just think that it’s a dead solution right now. I think we need to look into more solutions. There is widely diverse global interest in this right now. We could actually find a solution.”

Munther believes in making the effort to put yourself in the other person’s shoes. He says,”I can also see the Israeli perspective. If I was born and raised there and going into the Israeli military at age 17, I would block out what I have to do. I see the Israeli kids’ perspective. I think we could open up a more comfortable zone where we could give subjective opinions. I’ve had Jewish friends and we never talk about the issues. Their parents were pro-Israeli. My friends even ignored the fact I am Palestinian. I think that needs to end. Over and over again I’d tell my Jewish friends what’s going on and they block it out. Thankfully, now they realize what’s going on and actually are opposed to what their parents say. That was really hard for them to do. For some of them, their parents even shun them sometimes when the issue is brought up. Even from the Palestinian side, we see the Israelis as monsters. Yes, the bombings are really horrible. But what if you were in the Israeli position?”

Munther continues,”What if the walls were brought down and people were together as one, not as Israeli – Palestinian – Christian – Jewish – Muslim, but just as humans. And that comes back to the human rights thing. I do have cousins in Palestine who are being treated badly every day. But you always have to look at the other side’s perspective.”