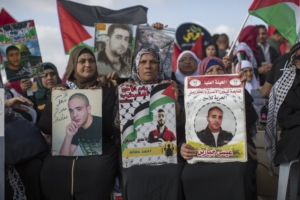 Some 1,300 Palestinian prisoners ended their “Freedom and Dignity” hunger strike May 28 after winning key demands in a historic victory against Israeli mass incarceration.

The strike was ended after 20 hours of intense negotiations between the strike’s leaders, including imprisoned Fatah figure Marwan Barghouti, and the Israel Prison Service, according to the prisoners’ solidarity committee.

The committee hailed the agreement as a “victory for the Palestinian people and the prisoners in their epic defense of freedom and dignity.” It added that Israel was forced to negotiate after realizing that the prisoners “were ready to continue until victory or martyrdom and that the use of oppression, violence and other violations failed to weaken them, but rather strengthened their resolve.”

The prisoners had survived on only salt water from 17 April until the evening of 28 May to demand improvements in conditions and an end to solitary confinement and heavy restrictions on family visits and an end to administrative detention – arbitrary and imprisonment without charge. The hunger strike was waged throughout the Israeli prison system by a united front of all Palestinian resistance groups incarcerated in Israeli jails.

The hunger strikers were boosted by strong support from Palestinian communities worldwide, and from prominent individuals and grass roots groups internationally who took up their cause internationally.

Despite the important win, the health of the hunger strikers is still a concern. Many prisoners who went without food are now hospitalized, in a weakened condition and deteriorated health. Vigilance is needed to ensure that they receive appropriate medical treatment

Marwan Barghouthi, the imprisoned Fatah leader who led the hunger strike, called it “the longest collective strike” and “a historic epic in the prisoners’ movement’s record over 50 years.” The win, he said, was a “turning point” in the Palestinian prisoners’ relationship with Israeli prison officials.

Gains won by the strikers, Barghouthi said, included “restor[ing]e the second monthly visit to the families of the prisoners, which was stopped almost one year ago, a]ddressing problems ongoing for years related to the conditions of daily life, including the conditions of women prisoners, child prisoners, ill prisoners,” and the “formation of a committee of senior officials of the Prison Service for continued dialogue with the prisoners’ representatives.”

Barghouthi warned Israeli authorities that prisoners would resume their strike if Israel doesn’t follow through on its commitments.

Israeli repression could not break strikers

In an attempt to break the strike prisoners were held in solitary confinement and special repressive units, subjected to round-the-clock raids and inspections, transferred under harsh and brutal conditions, had all personal belongings, including underwear, confiscated, and were deprived of all sanitary and hygiene materials. Yet Israeli repression could not break the prisoners’ will or their solidarity with each other.

Ahmad Sa’adat, General Secretary of the Popular Front for the Liberation of Palestine, who participated in the strike from Ramon Prison where he has been jailed for 10 years, said that the victory, “reaffirm[s] the fact that rights can only be taken and never begged for, and that the resistance was the main lever for all of the achievements of the Palestinian people in the successive eras of the revolution.”

Palestinian support and worldwide solidarity: factors in the victory

A factor in the prisoners’ victory was the overwhelming support the united front hunger strike received from Palestinian people everywhere. This included a general strike on their behalf on May 22, the 36th day of hunger strike, which rocked the occupied West Bank, East Jerusalem, and Gaza Strip.

On that day, which also coincided with Donald Trump’s visit to the area, hundreds of protesters blocked roads in cities and towns in the West Bank. Stores and government offices and public transportation closed down, and central areas deserted.

International solidarity also played a role in the victory.

Prominent individuals and political prisoners from around the world made statements in solidarity with the Palestinian strikers. This included Rene Gonzales of the Cuban 5, who spent 15 years in a U.S. jail, Oscar Lopez, Rivera. a Puerto Rican patriot just released after 36 years behind bars in the U.S., South African prisoners of Apartheid formerly held on Robben Island, Irish Republican, and Filipino political prisoners.

Supporters demonstrated in solidarity with the prisoners on every continent. To raise awareness, many posted on social media pictures of themselves taking the “salt water challenge” — drinking only salty water, as the hunger strikers did.