On Tuesday, September 4, activists and families spoke out at the Sarasota County School Board in support of the rights of transgender students. Members of Party for Socialism and Liberation, Answer Suncoast, ALSO Youth and Sarasota IWW took part. 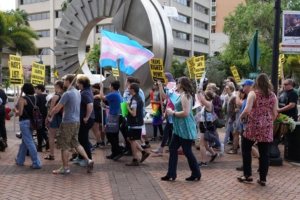 Since early 2016, trans students and their supporters have been holding speak outs, rallies, call-in days and other events to pressure the school board to take action around trans rights. Students bravely stood up to hateful opposition from a local church and conservatives on the school board, creating a large and energetic movement.

The campaign started in December, 2015, when Pine View School refused to grant bathroom access to Nate Quinn, then a senior at the high school. Quinn and a small group of friends organized a call-in day that attracted hundreds of participants, forcing Pine View to reverse its discriminatory bathroom policy the following week. Students then set their sights on the entire school district.

The grassroots mobilization has already succeeded in making significant changes in Sarasota County Schools, including trainings for administrators, teachers and staff, the adoption of a support guide for LGBTQ students, and equal bathroom access on a case-by-case basis.

Along with the support guide and trainings, the students have also demanded an across-the-board policy of equal access to all school facilities, including locker rooms and bathrooms, and an update to the school district’s non-discrimination policy that includes “gender identity” and “gender expression.”

One speaker on Tuesday night was Vanessa Nichols, the mother of a fourth grader in Sarasota who is transgender. Several months ago, Nichols was planning to move out of the district to find a safer environment for her son. However, with the help of ALSO Youth and changes won by the local movement, she was able to work with the school district to provide the support her son needed. 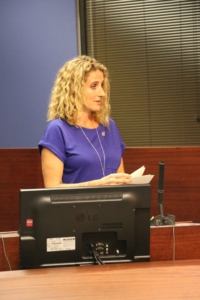 “I want to highlight what a positive experience feels and sounds like so that Sarasota County can continue to provide it throughout the district. My son’s school’s administration met with me upon my first request at the end of last school year to discuss the coming school year. The then-principal coordinated a team meeting, at my request, of administrators, school social workers, the school psychologist, the guidance counselor and pupil support,” said Nichols.

“With this team we devised a gender support plan, which is very flexible for my son, in writing, which included numerous talking points, such as who he would feel safe reporting to in the event of bullying and which bathroom he would use, the bathroom where he feels most safe.

“We then followed up with the same team of individuals, plus my son’s new teachers that were assigned to him this year, prior to the start of the new year, to ensure we all were on the same page in supporting and affirming my son. This plan will be monitored throughout the year, and like I said, it’s important that it’s flexible. Having a new principal made me a little bit uneasy at our school for this transition, but he went above and beyond, and reached out to ALSO Youth to train his entire staff and to educate them on what this meant for my son and all LGBT kids.

“In my opinion the pendulum is starting to swing in favor of growing support for our trans youth and I’m delighted to see that Sarasota County is currently, at least in our experience, on the correct side of history with this discussion. However, my ask would be to make our experience the rule in Sarasota County for our trans kids, not the exception. We need this uniformity in our schools for our children’s safety and their emotional well-being,” Nichols told the School Board.

Another speaker that night was Brenda Kent-Dix, who came with her family. She spoke about her youngest son, who is intersex and who will begin school in Sarasota County Schools in three years. Intersex people are born with some biological characteristics that are considered “male” and others that are considered “female.” The research shows that one out of a thousand people are intersex, but might be as many as one out of five hundred. 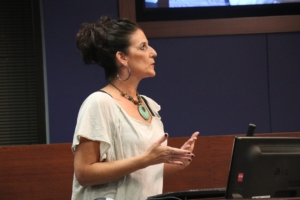 “So what that will mean in the future we do not know, but because of our culture, he’s assigned male, because if you look at him that is what you see. And when he goes to school here in Sarasota County in three years that is what the staff will see. But that might not be what he sees.

“And medically he would be right, whether he sees himself as a male, as a female, or as fluid. He might feel both. What will the school be able to do to keep my child safe? Will you ask him (‘him’ for now) to use a bathroom of a gender that he knows in his heart that he is not, because his body tells you, the staff and the teachers, that that is the bathroom he should use?

“And you would be asking him that as a five-year-old, a six-year-old, a seven-year-old, and the emotional and mental damage would be lifelong. It is so important that we begin to understand things that we don’t understand—medically, mentally and emotionally,” said Kent-Dix.

Organizers vowed to continue the movement for trans student rights, and to keep public pressure on the School Board until it fully recognizes and protects the rights of transgender and gender nonconforming students. The inspiring, progressive changes happening in Sarasota County Schools show that justice is not a result of the system, but rather of action by the people when they organize and demand it.