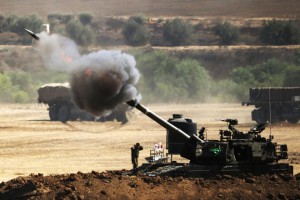 Just minutes after the White House made a tepid criticism of the deadly shelling of a United Nations-run girls’ school and refugee center in Gaza, the U.S. military announced that it was resupplying the Israeli army with several types of ammunition. At least 15 people were killed and more than 90 wounded in the attack on the school. An Israeli air attack the same day on a crowded market in the Jabaliya refugee camp killed at least 17 people and injured more than 100.

While the U.S. statement criticism of the shelling of the school was obviously a reference to an Israeli military action, the statement pointedly failed to name Israel, in keeping with U.S. support for Israel in its murderous assault.

Now, the Pentagon has announced, it will provide 120mm mortar rounds and 40mm ammunition for grenade launchers among other munitions from a $1 billion stock of ammunition pre-positioned in Israel for use in other U.S. wars in the region.

The Israeli occupation forces have expended so much firepower in their devastating assault on Gaza, a tiny and densely populated strip of land, they needed an emergency resupply in order to keep up the killing and destroying.

More than 1,200 Palestinians have been killed and nearly 7,000 wounded since July 8. On the Israeli side, 53 soldiers and 3 civilians are reported killed and hundreds wounded.

The emergency resupply operation illuminates the real relationship between the U.S. and Israel. The differences between the leaders in Washington and Tel Aviv are secondary to the military alliance. Bottom line, Israel is an extension of Pentagon power and has been for many decades. That is why Israel has received hundreds of billions in military and economic aid.

What’s more, this latest episode demonstrates once again that Israel could not do what it does without the support – economic, military, diplomatic and political – of the U.S.