They came from across the country–37 states and 159 towns and cities—727 people in all. Some drove for two days, or rode a bus for 28 hours to get there.

They made sacrifices to come. A man from Ohio used the money saved for a payment on a potential new home to come. A waiter from Geneva, NY, gave up two crucial days of weekend work to come, and had to fundraise for the missed labor time.

What was so compelling?

It was the founding meeting of the People’s Congress of Resistance in Washington, D.C., Sept 16-17. Here, progressive organizations and individuals gathered and declared their commitment to a unified fightback for revolutionary change.

Who were they? While there were veterans of decades of struggles, the overwhelming majority were young. Many were immigrants or the children of immigrants. While the big cities were represented, so were the small towns and rural areas so devastated by the economic crisis.

This reporter snaked through the thoroughly multinational crowd interviewing people. She found that this was a thoughtful crowd. They came because they wanted to fight together across different struggles, and to oppose imperialism as well. They arrived ready to unite with common demands against a common enemy—the 1%, and the Republican and Democratic parties that both front for the rich. They came to listen and to learn from each other.

Here are just a few of them.

Maraak Anderzj, Aaron Gibson and Fidel Sankara came from Fayetteville, Arkansas, a city of 73,000. “After the election and the upsurge that followed, we felt a new central organizing had to occur,” said Gibson. This seemed exactly what was needed to unite separate struggles under one common front.”

Joshua Riker came from Lawrenceville, NJ, a mostly white town of 4,000. He grew up poor, he said, raised by his grandmother. “I joined the Army Reserves for money for college. I thought that what I was doing mattered—that we were in the Middle East because of 9/11. I did the research, and found out that before 9/11 we killed 500,000 civilians there. I learned about Korea. We dropped 1,000 tons of bombs there, more bombs than in the Pacific Front in World War II.

“There is a solution to this—that’s why I am here. …Being here is awesome because you are actually learning something that ‘s true.”

Gloria Angeles Tadii came from a very different New Jersey. Her city, Clifton, population, 84,000, the Mexican community is big, and in nearby Passaic, a city of similar size, 70 percent of the people are Mexicano. Tadii traveled to Washington for the Congress because, “It’s important to stand together to learn how we can fight for our communities.” She is an organizer, and publishes a twice-yearly newsletter, Zenka Sungu (Daily Heart), written in two indigenous languages. She speaks out on Rebeldia radio, an internet station.

Gabriel Clemente came from Madison, Wisconsin, where he works with OM Build, an organization which has created a community of tiny homes for homeless people. He and his group is in a struggle with that city’s government, headed by a self-professed radical, Mayor Paul Slogin, which will not support OM Build.

He explained that when he saw the platform of the People’s Congress of Resistance, in its manifesto, “Society for the Many,” “I was in. I signed up to volunteer, organized a support meeting, and booked a radio show in January as a report back. The platform represents the grievances of the entire working class. I had to bring it back to my community. I feel comfortable calling myself an organizer because I have every intention of organizing.”

Stephanie Basile, from Washington, D.C., has been a union organizer for eight years, and considers herself part of the movement for social change. She came because “it is exciting that people who didn’t have political positions before are standing up for women, immigrants, people of color.”

Alex Melamed from Raleigh NC, said, “I had to come. This is a historic event. We don’t have a lot of people in our area in socialist groups. It’s an opportunity to be in a room with so many like-minded people. It’s not to be missed.”

Diamond McDonald, from Greencastle, Indiana, a town of 10,000, came because she was “baffled by the current state of our government and economy.” Rather than top down, the government should be bottom up, she said. “We come together to make a better state for everybody. How do we build racial harmony, fight police brutality, change the economy? I want answers to those things, and ideas.”

Jonathan Ebhogiaye, hails from South Africa. He is a student, and currently lives in Marietta GA. He has been working with Malcolm X Grassroots movement around the issues of police violence and political prisoners. He came “to connect with like-minded people, to meet great people, and to learn a lot.”

Vincent Catheline, a student from Berkeley, California, came because the Congress “connects domestic to international issues–Venezuela and Korea. The Congress is very relevant to people everywhere.” Back home “I will share the Congress, what people had to say.”

Isabella Garcia and Nathaleen Palomino came together from San Jose, California. Palomino, a program director for an after school program, came because “It’s important for me to be able to see what a people’s congress looks like, to see the power when people come together” and “to see there are people with the same values as me. I am gathering resources and ideas from different people to take back.”

Garcia works in Public Health. Why did she come? “Deportations, immigration, rights of women, LGBTQ rights, white supremacists starting to organize—it’s scary. I am looking for groups and spaces fighting against that. Working on just one particular issue puts you in a bubble. You have to see everyone who is also fighting. It’s great to see different groups coming together for a common program. I will be taking the experience here to people in San Jose and Santa Cruz. I want to be a part of moving it forward.”

They arrived with high spirits, but when they left, for so many the level of solidarity they forged, their enthusiasm, and readiness to take the next step to build the People’s Congress of Resistance was so high it was off the charts.

This Facebook post of John Birkel, from Nashville, Tennessee, reflects the view of many young Congress participants.

“It was amazing, inspiring, and life changing. There were so many incredible leaders and speakers from all around the nation and the world. Black Panthers, ambassadors, Black Lives Matter, so many awe- inspiring comrades from every walk of life united by a common vision…who are making a difference in their communities and making their voices heard.” 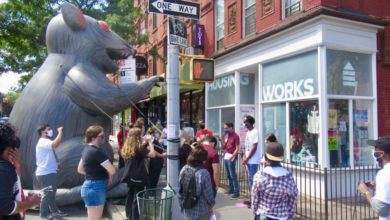