For many of the tenants of the Lazy Daze Mobile Home Community in Phoenix, Ariz., organizing has not been a choice — it has been a necessity.

Outdated electrical equipment resulting in multiple fires, irregular and inexplicable fines, harassment and negligence from the management company, and a crackdown on formal opposition have many residents feeling that their homes and lives are in jeopardy. Now, they are starting to organize and speak out.

“When you go to sleep, you never know if you’re going to get up the next morning,” one resident said at a press conference the community held on Feb. 14. “Our lives could be in danger.”

Until recently, the West Valley mobile home community was actually a source of a much-needed commodity in the Phoenix area: affordable housing. Veronica Monge, a co-chair of the Arizona Poor People’s Campaign, described Lazy Daze as the “last bastion” of affordable housing in an area that has seen an uptick in inequality since the onset of the COVID-19 pandemic. In December, Arizona reported that it had recovered the number of jobs lost since the onset of the pandemic, but the on-the-ground reality is still grim as the working class continues to face economic woes, especially when it comes to housing. In 2021, between January and October alone, the median sale price for a home in Phoenix rose 24.4%. Likewise, rent rates this February were 23% higher than they were in February 2021, with the median rate for a one-bedroom being $1,300.

All of this made the $600 to $800 monthly rates of the Lazy Daze Mobile Home Community a bearable option under the circumstances. But now, the endangerment and mistreatment of the community by its management are increasingly harming the livelihoods of the park’s residents.

Residents told the media and organizers that the situation started to come to a head when management shut down the on-site laundromat. Without access to the facility, members of the community began installing their own washers and dryers, only to find that the park’s inadequate electrical system was not able to handle the load. Appliances only worked one at a time, and residents noticed that flickering lights and electrical fires were worryingly becoming regular occurrences.

Meanwhile, attempts to get management to solve this issue have only resulted in further harassment of the community. When residents began having meetings to discuss forming a tenants’ union, those who attended were hit with inexplicable fines. According to a report put together by the Arizona Poor People’s Campaign, 100 of the park’s residents reported “excessive and apparently unjustified charges,” for which they were given no explanation and no time to correct the “violation.”

As it stands now, the on-site electrical boxes — which have not been replaced since the 1970s — can only serve up to 50 amps, whereas most modern mobile home parks are equipped to serve up to 100 to 200 amps. According to the AZ Mirror, one resident reported that a technician for the Salt River Project, an Arizona-based public utility company, found that the poles delivering electricity were inadequate and out of date. SRP offered to replace the equipment for free if management would pay to replace the poles, but management declined.

One resident reported being charged with a “pet violation” fee for a pet that had been deceased for months. Another resident was hit with a fee for a vehicle that had been repossessed months prior. Attempting to get these fees removed was a multi-month process, only made more frustrating by the fact that Lazy Daze’s management is notoriously hard to reach. Phone numbers lead to dead-end voicemail boxes and emails are frequently unanswered.

The prevalence of these unjustified fees — which appear to be targeted towards proactive members of the community — presents a real danger. Depending on the “violation,” the charges can range between $25 and $250, which can add up to anywhere between 3 percent and 41 percent of monthly rent. Even worse, some of the fees are being used as the basis for eviction notices.

As a result, residents are wary of being too vocal about their dissent. According to Veronica Monge, most do not want to speak with the media nor be seen protesting out of fear that they will be targeted. Several tenants have reported that management has contacted and questioned them as to whether they have participated in organizing.

One particularly egregious act of retaliation occurred after tenants held a prayer vigil outside an ill resident’s trailer following a tenants’ union meeting. The next day, management sent out a notice that from that point on residents were to begin placing their trash directly in front of the ill resident’s trailer — despite the fact that there is a fire lane there. “I don’t understand how you can have a fire lane and trash cans in the same place,” Monge said, speaking to AZ Mirror.

Nonetheless, the dire circumstance and lack of other affordable options have forced the tenants’ hand, and they are organizing regardless of the risk. First reaching out to the Arizona Poor People’s Campaign, they have also gotten in touch with the West Valley NAACP, LULAC, local advocates, city officials and more. Now, some long-overdue attention is being paid to the situation.

Tenants organized the Feb. 14 protest and press conference to help spread the word about their mistreatment.

The struggle between tenants and landlords over rent and conditions is inherent to housing under capitalism. Tenants fight for better conditions and fair rent, while landlords work to increase rent and avoid improving tenants’ living situations. Mobile home communities add a few twists to this struggle.

In mobile home parks, many of the tenants own their homes, and the monthly rent they pay is for their lot and the amenities that they were promised. In the Lazy Daze Mobile Home Community — with a defunct laundromat, a lack of amenities (another one of tenants’ grievances), dangerous conditions and essentially no responsible communication from management — they are not even getting a minimum level of service. Tenants are paying, in many cases, for the right to occupy a concrete slab.

The conditions in Lazy Daze are not isolated incidents. Mobile home parks and other affordable housing options across the country have been plagued by similar occurrences. In Arizona alone, there has been a steady string of mistreatment for mobile home park tenants. But across the state, these tenants are organizing for their rights, safety and dignity.

In December 2021, residents of the Mesa Gardens RV Park in Mesa, Ariz., protested against illegal mass-eviction notices and correlating negligence of their management to inform and assist tenants. The cause of the eviction was the fact that Mesa Gardens was built on a plot of land that in 2020 was incorporated into a newly-designated “Central Business District,” which promised tax incentives in exchange for redevelopment. Management was required to give residents a 180-day notice prior to eviction and help educate the community on a mobile home relocation fund they qualified for, but they were only given a 90-day notice and the information on the fund never came. According to EastValley.com, residents accused their landlord of assuming “that the mostly Hispanic tenants would not know their rights and acted on that belief by issuing the shorter notice to facilitate a quick sale of the property.”

In January, the El Frontier Manufactured Home Community in Tucson spoke out against negligence by their management company, citing concern for their health and safety as their motivation for organizing. There, residents reported frequent power outages, property damage, and — to add insult to injury — an increase in rent rates.

Residents of the Lazy Daze community have reported being threatened with increased monthly payments as well. At Lazy Daze, residents feel that management might be trying to bully them out of their spaces and their homes.

For those who have been targeted with unjust fees, or in some cases threats of increased rent, there are only two options: pay up or get out. “They know perfectly well that we do not have the money to rent a trailer and take our house to another place,” one resident told the Arizona Poor People’s Campaign. “What they are looking for is that we leave the house so that they can resell it later.”

Lazy Daze residents are not taking this abuse. The Feb. 14 press conference was one element of a larger campaign and residents say their goal is to change the management structure of the park. 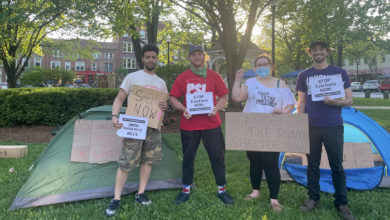 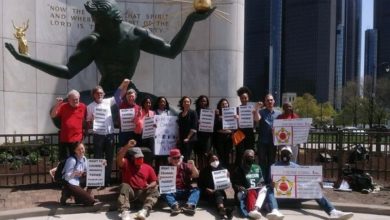