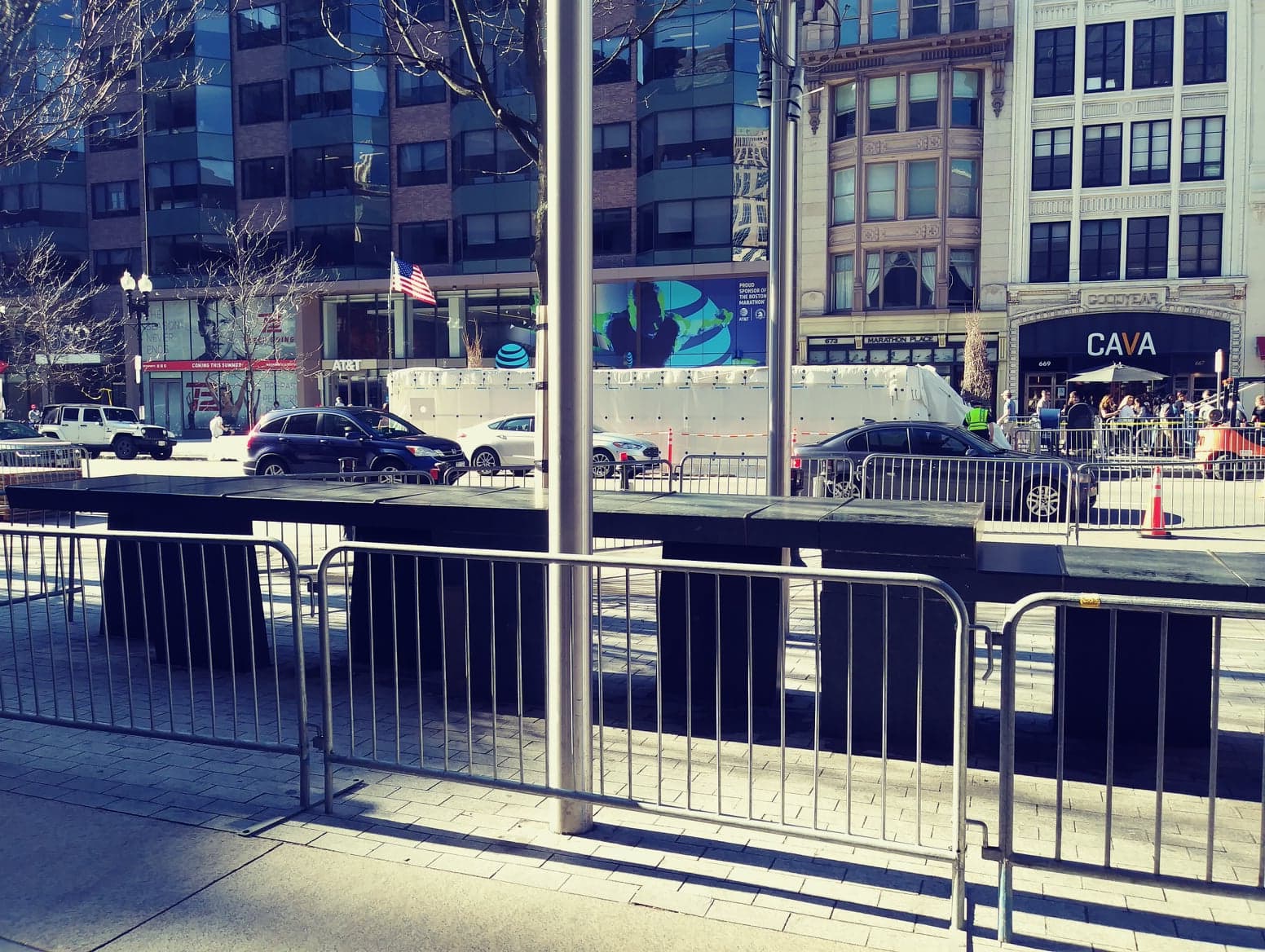 Metal barriers are placed in Copley Square, Boston in preparation for the Boston Marathon. Photo by Daniel Kontoff. Used with permission.

Tens of thousands of people flocked to Boston this past weekend to participate in or cheer on the Boston Marathon. The marathon is viewed as a cultural and economic boon for the city. Per the Boston Athletic Association, in 2018 the Greater Boston region saw an estimated $201 million increase in spending due to the marathon. However, the detrimental impacts of the marathon on Boston’s most oppressed communities have been severely underreported. People experiencing homelessness saw an uptick in police harassment and arrests, and were displaced throughout the entire marathon route. Liberation News and organizers with the Massachusetts Union of the Homeless spoke with several people experiencing homelessness in the area to inquire about how police activity changed in preparation for the marathon.

Local police toss around phrases like “the Backpack Mafia” to describe people experiencing homelessness, said a local member of the community, Remy. “Cops put out an order to ‘clean the streets’ in preparation for the marathon,” Remy said, citing an 11 person mass arrest that had taken place earlier in the week. “They used to tell you to just pack it up, but now they’ll arrest anyone they can.”

Rafayel West, another person experiencing homelessness, expressed a similar view when asked whether there’s been an uptick in police harassment. “What they do is they use the marathon and get massive funding to sweep the streets of not just homeless people, but also what people would describe as ‘undesirables.’ People on a lower socioeconomic bracket. The preparation of the marathon really amounted to [the police] arresting massive amounts of people and drug users in Boston, really anyone that resembles a homeless person.” This follows a longstanding international trend of people experiencing homelessness and poor workers being harassed and arrested in the buildup to large sporting events, in an attempt by local governments to display a “sanitized” image of their respective cities.

Everyone Liberation News and MUH organizers spoke to painted the same distinct picture of a divided society; one that not only casts them aside, but systematically denies them the rights that we are supposedly all afforded. “The reality is,” said West, “they can and will do anything they want to you, and should you not be able to afford bail and have an attorney on retainer, you’ll sit inside a jail cell up to the point where you either beat your case or you’ll plea guilty because you want to go home. So you’ll plead guilty and accept 18 months on probation on a charge that you should beat but you’re desperate, you’re homeless, you’re poor, you just want to leave. The thing about your rights is you don’t have any. You have them with money. With money comes rights, without money comes none.”

“There’s a war between the classes, between the haves and have nots,” Remy told Liberation News. His point is reflected in the rising number of people experiencing homelessness in Massachusetts. Boston saw the largest increase in homelessness of any major city in the United States between 2017-18, while multimillion dollar building projects cater to a market of rich investors.

The poor organizing the poor: Relaunching the Massachusetts Union of the Homeless

Enormous shifts in the global capitalist system brought on by the “high tech revolution” in the 1980s caused a sharp rise in unemployment and homelessness across the global north. In response to these changing conditions, many people experiencing homelessness met in Philadelphia to found the National Union of the Homeless. Together, they charted their politics, strategy, and tactics, and launched a national offensive in the winter of 1988 under the banner of ‘Homes and Jobs: Not Death in the Streets.’ At its height, NUH organized 25,000 homeless and formerly homeless members in 25 chapters across the country.

“It is critical today that the poor organize the poor. That the poor arm themselves with clear weaponized political education and understanding that we are not each other’s enemy…Presently, socioeconomic issues from conditions of poverty are deteriorating quickly, tossing entire families on the streets and into shelters. In many parts of the country, the poor are experiencing homelessness and reaching out around building unions. These actions are indicative of how our beloved community is fed up and ready to mobilize.”

As long as there is a profit motive to keep people out of homes and in jails, there will be people experiencing homelessness facing police harassment, crammed into overfilled shelters and prisons. This systemic injustice must end, and a new system must usher in an era of guaranteed housing, work, food, healthcare and other basic necessities. The high-level class consciousness of those pushed to the edges of capitalist society is far too often ignored, but it is high time we make it our mission to raise these voices. The Massachusetts Union of the Homeless is working to organize people experiencing homelessness into a force powerful enough to win demands for more comprehensive services, better treatment and housing.

There is no doubt that people like Remy, Justin and Rafayel will be on the frontlines of this fight, because for them it is a matter of life and death, imprisonment — whether in a jail or an abusive, overfilled shelter — or freedom.

Housing for all, NOW!