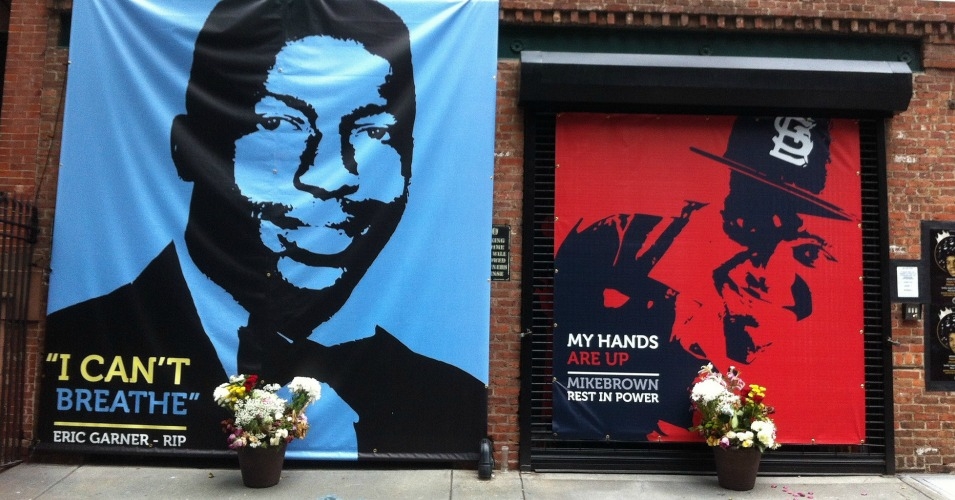 This revelation occurred in a New York City Police Department disciplinary hearing against Pantaleo, five years after Garner’s death. The hearing has gone on for several weeks.  Bannon’s comment evoked angry gasps among the activists gathered in the hearing room to demand justice for Garner and to support his family.

Pantaleo killed Garner while arresting him for selling loose cigarettes. Garner tried to argue his innocence because he was tired of the constant harassment of the 120th precinct in Staten Island. A video of the killing, and Garner’s repeating, “I can’t breathe,” went viral on social media, sparking disgust and outrage worldwide.  He was killed just weeks before Michael Brown was shot and killed by a police officer in Ferguson, Missouri. Both deaths  set off  a national movement against police violence and murders in  Black communities. Garner’s  dying words became a rallying cry for the burgeoning Black Lives Matter movement.

Despite the widely seen video of the incident, and the mass protest movement it sparked, Pantaleo has evaded both administrative and legal consequences for killing Garner, save for being placed on desk duty, where Pantaleo has collected a 35 percent increase in overtime pay.

Local prosecutors declined to charge him with a crime, and a potential civil rights case against him stalled. Police have prolonged and obstructed departmental disciplining of Pantaleo.

This current Police Department disciplinary hearing on Pantaleo’s behavior  is taking place only because the Civilian Complaint Review Board  brought charges. That Pantaleo had four other substantiated  allegations of abuse against him is known only because someone leaked the files.

Incredibly, Stuart London, Pantaleo’s lawyer, argued in the hearing that the unauthorized choke hold that killed Garner was not a choke hold at all, but a “seat belt maneuver.” Even though the medical examiner testified that the choke hold triggered a fatal asthma attack, London used an incredulous fatphobia argument to actually blame Garner for his own death. He said, Garner was ”morbidly obese. He was a ticking time bomb that resisted arrest. If he was put in a bear hug, it would have been the same outcome.”

The administrative hearing ended June 6. Judge Rosemarie Maldonado has 90 days from that date to submit her recommendation to Police Commissioner James P. O’Neill, who will make the final decision. Punishment could range from losing vacation days to being fired.   However, the public may never know the outcome of the hearing because, under state law, police disciplinary records do not have to be made public at all.

If the outcome of the hearing is made public, it will be due to mass pressure not media scrutiny. National and local news outlets have not given the hearing significant media coverage. The corporate media remains complicit with the NYPD attempts to get Pantaleo off the hook.

While Pantaleo has faced no substantial consequences for his actions, the Garner family continues to suffer the consequences of Garner’s tragic loss.

Eric Garner’s daughter, Erica Garner, died of a heart attack in 2017. Her father’s death lead her to become activist, organizing die-ins to protest police brutality and misconduct. Three weeks before her death she told Like It or Not, “I’m struggling right now with the stress and everything.”

Eric’s mother, Gwen Carr, has become an activist too, speaking at police brutality protests and advocating for legislation to address police brutality. She sat in on Pantaleo’s disciplinary hearing but left the room when the video of her son’s death was played. Outside police headquarters, Carr said the police “do not think of us New Yorkers as human beings.”

Ramsay Orta, Garner’s friend and the person who filmed his death, is incarcerated because he dared to bring his video to the media.

Orta says he filmed the incident because the police were constantly harassing people in the neighborhood. After the video went viral, police harassment of Orta increased. He was  charged with selling drugs to an undercover cop, and is serving a four year sentence on drug and weapons charges.

Orta explained, “Finally, I try to do something good with my life, something good for my community. And that’s when I really get in trouble? Not the drugs, not the gang stuff, the video?” He maintains that while in prison, he has been threatened, abused and harassed on a regular basis, and fears for his life.

Orta remains the only person to be incarcerated in connection with the Eric Garner case.

The system is responsible

Pantaleo is not the only person responsible for Eric Garner’s death. The Staten Island, state and federal governments and the media are also culpable.

A Staten Island grand jury declined to indict Pantaleo on criminal charges. Staten Island is known as one of the most police-friendly areas of New York City.

A federal civil rights investigation of the case went nowhere. There was a dispute between federal and civil rights prosecutors over whether to file charges. Problems with the FBI investigation delayed the case until after President Trump took office. Trump, whose racist views are well documented, he took no interest in the case.

Federal statutes also make prosecuting Garner’s killers difficult. The Supreme Court case, Graham vs. Conner, maintains that jurors must put themselves in the officer’s shoes when evaluating cases of police murder. Jurors must keep in mind the danger that police work poses, as well as the need to make quick decisions. In this way, priority and humanity are given to the Garner’s killers, not to him.

All these factors have led to a system where police are rarely held accountable for killing citizens. It is extremely rare for a cop to be actually charged in a wrongful death. Bowling Green University criminal justice professor Phillip Stinson pointed out that of the 80 police charged with murder or manslaughter while on duty between 2005 and 2017 just 35 percent of them were convicted of anything.

It is clear that the justice system is designed to allow the state murder of Black citizens, with little-to-no accountability from anyone.

In the case of Eric Garner, we can see how racist police terrorism led to his death, the untimely death of his daughter, the ongoing suffering of his mother and the incarceration of his friend. And this is just one case. Police brutality, and the lack of accountability that comes with it, is nationwide.

According to a 2014 survey by the Black Youth Project and the University of Chicago, more than half of Black people between the ages of 18 and 34 have experienced police violence or harassment or know someone who has. Princeton University and the Brookings Institute found in 2018 that many Black youth in Chicago view police as “a constant, inescapable, and unwelcome presence in their lives. Interactions are marked frequently by officers exerting their dominance in the form of offensive questions and degrading directives, causing Black children to feel powerless.”

Meanwhile, the killing continues. A recent report in AZCentral stated that Arizona police shoot at someone every 5 days. “People will read stories in their local news and they will think these are one-offs, “ said Stinson, “but it’s only when you start to aggregate the data statewide and nationally that people start to realize how big of a problem it is.”

There is no other way to describe this continual physical, emotional and spiritual brutality by police against Black people than to call it terrorism—terrorism permitted and protected by the law. It is a form of social control by the state with the goal of harassing whole communities into a state of constant stress, fear, and mistrust in an attempt to prevent them from fighting back against oppression.  While this has inflicted great suffering, it cannot stop the struggle. Garner’s family, their supporters, and the national movement against police murders, new jails and mass incarceration have made it clear that without justice there will never be peace.