By Nazila Bijari and Mazda Majidi 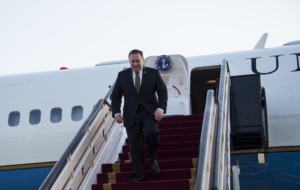 U.S. Secretary of State Mike Pompeo concluded his 8-day tour of the Middle East mid-January. He visited Jordan, Iraq, Egypt, Bahrain, the United Arab Emirates, Qatar, Saudi Arabia and Oman. The explicit purpose of Pompeo’s trip was to form an anti-Iran alliance among the reactionary governments in the region. Explaining his goals, Pompeo told reporters in Doha, Qatar, “We will gather around a number of different topics … fighting ISIS is part of that … and address how we can get the Islamic Republic of Iran to behave like a normal nation.”

The countries Pompeo chose to visit give a clear picture of what he considers to be a “normal nation.” Six of the countries he visited, Saudi Arabia, UAE, Oman, Jordan, Bahrain and Qatar, are ultra-reactionary repressive monarchies where the royal families rule with an iron fist. The fact that Saudi Arabia murdered journalist Jamal Khashoggi is only unique in that it happened in Turkey and that it was exposed. Assassinations, murder, chopping off people’s arms and heads in public and other atrocities are common among Pompeo’s friends in the region, the “normal nations.”

The United States has now invited officials from 70 countries to attend a meeting Feb. 13-14 in Warsaw, Poland. According to Pompeo, the gathering will “focus on Middle East stability and peace and freedom and security here in this region, and that includes an important element of making sure that Iran is not a destabilizing influence.” He also pledged to “expel every last Iranian boot” from Syria.

But Pompeo’s efforts towards forming an anti-Iran alliance may be a challenge. Long before his trip, most countries on Pompeo’s itinerary had been hostile to Iran. However, significant rifts have developed among U.S. client states in the region. This is in part due to the overly ambitious policies of the young Saudi Crown Prince Mohammad bin Salman, affectionately called MBS by Western media.

It is obvious that the order to murder Khashoggi came from bin Salman. But he is also responsible for a series of Saudi policies that have caused a major split among the reactionary states in the region.

In July 2013, when General Abdel Fattah el Sisi orchestrated a coup in Egypt, most U.S. clients in the region fully supported the coup. Turkey and Qatar, however, strongly objected. Both countries had long supported the Muslim Brotherhood, the Egyptian branch of which was in power under President Mohammad Morsi, now ousted by Sisi. This was the first major manifestation of the split between these states.

In the meantime, Turkey, Qatar and the Saudi-led alliance all supported jihadi terrorists fighting to overthrow the Ba’ath Party-led state in Syria. But, they each supported different groupings of jihadists. When Syrian President Bashar Assad’s government appeared to be headed for defeat, aside from periodic clashes among the jihadists, the differences between Saudi Arabia and U.A.E. vs. Qatar and Turkey did not come to a head.

However, with the help of Russia, Iran and Lebanon’s Hezbollah, the tide in Syria’s civil war turned. The Syrian Arab Army drove ISIS, Al Qaeda and dozens of other jihadist groups out of most of its territory. ISIS has been almost completely defeated, not by the hands of U.S. forces, but by the forces of the Syrian state and its allies. The differences between these dozens of groupings of terrorist forces is not that some of them have some commitment to democratic principles. They are jihadists that share variations of the same reactionary ideology. They are different in terms of their sources of funding (Saudi Arabia, Qatar, Turkey) and the rapidly shrinking territories they control.

In June 2017, Saudi Prince bin Salman led a group of countries under its leadership in severing diplomatic ties with Qatar and even denying access to Qatari airlines and ships. Saudi Arabia claimed that sanctions were due to Qatar’s “support for terrorism,” a ridiculous claim given that Saudi Arabia is a much bigger supporter of terrorism than Qatar. Salman overestimated the strength of Saudi Arabia, as he often does, and thought that his hardline stance would force Qatar to capitulate.

But the move backfired. Iran immediately offered assistance and expedited shipments of foodstuffs to Qatar. Aside from pushing Qatar closer to Iran, Saudi Arabia’s hegemonic excesses created an enemy in Turkey, which also expanded its relations with Qatar. Khashoggi’s murder in the Saudi Arabian consulate in Turkey might well have gone unexposed had it not been for the fact that Turkey now views Saudi Arabia as its enemy.

So Pompeo is attempting to form an anti-Iran alliance among countries that have a deep conflict between them. Pompeo would need to end the Saudi-Qatari conflict, which he was unable to do. Further, Pompeo would also need Turkey and Iraq to take part in the alliance against Iran, which is highly unlikely.

The other stated purpose of Pompeo’s visit was to reassure U.S. allies in the region of the continued U.S. commitment to fighting ISIS.

On a phone call with Turkish President Erdogan, Trump abruptly declared that he would pull U.S. troops out of Syria. “OK, it’s all yours. We are done,” Trump said to Erdogan. This decision came as a complete shock to everyone as it did not follow diplomatic norms nor the customary decision-making processes in the foreign policy establishment.

Trump has no problem with imperialism and is very much for an expansion of U.S. influence in the world. In fact, his extreme racism could make him a potentially good element for executing imperialist foreign policy. But, as the leader of world imperialism, Trump is so ignorant and so incompetent at his job that he has no clue how the system works.

On a surprise visit to Iraq during the holidays, Trump stated: “If they want us to do the fighting, they also have to pay a price and sometimes that’s also a monetary price, so we’re not the suckers of the world. … We’re no longer the suckers, folks and people aren’t looking at us as suckers. … The nations of the region must step up and take more responsibility for their future and also they have to confront those remnants of ISIS and take them out very easily if after we’re totally finished, they’re left at all.”

In a gathering of his supporters in Southaven, Miss., Trump said: “We protect Saudi Arabia. Would you say they’re rich. And I love the King, King Salman. But I said ‘King – we’re protecting you — you might not be there for two weeks without us — you have to pay for your military.’”

Salman, Israeli Prime Minister Benjamin Netenyahu, and many other U.S. allies/clients in the region have been deeply disturbed by comments such as these and the announcement of the withdrawal of troops. The leader of the United States is not supposed to openly state that it props up states that would otherwise fall “in two weeks.”

Trump seems to not understand that the United States has propped up arch-reactionary Gulf monarchies, including Saudi Arabia, for decades,  not as a naïve friend that is being taken advantage of, but as a way of upholding U.S. strategic interests in the region. Similarly, Trump does not get the fact that the U.S. presence in Syria was not primarily about fighting ISIS, but to help overthrow the Syrian state.

While every official in the imperialist establishment, from presidents to secretaries of state to foreign policy analysts at the CIA understand how U.S. military expenditures and adventures are at the service of geopolitical interests, Trump seems to have bought into the racist narrative that the U.S. is making a sacrifice to help its lesser friends, including “King Salman” who he says he loves.

Pompeo, along with National Security Advisor John Bolton, have long been obsessed with overthrowing Iran. During his short tenure as U.S. representative at the United Nations, Bolton even went so far as encouraging Israel to bomb Iran to force Bush’s hand into a U.S. invasion of Iran.

Pompeo and Bolton are not working on implementing Trump’s policy in the Middle East. In fact, Trump’s policy in the region is not coherent enough to implement. What they are doing is trying to blunt the effect of Trump’s impulsive decision to pull out of Syria. They know that Israel, Saudi Arabia and others are disheartened by the announced U.S. pullout, even if it turns out to be only partial. They are hoping to revive the long-held neocon dream of redrawing the map of the Middle East, which requires the overthrow of Syria and Iran.

What is the progressive response?

How should progressives and revolutionaries in the U.S. approach this question? The liberal establishment has uniformly condemned Trump for his ignorance and emphasized that U.S. troops should stay to continue to play their important tasks. Amazingly, even some progressives are opposing the U.S. draw down from Syria. They come up with various justifications, like claims that U.S. troops should stay in Syria to protect the Kurds, stand up to Assad, fight ISIS, etc.

Those who claim that U.S. troops should stay in the Middle East share Trump’s apparent ignorance about the role of the U.S. military, thinking that it is a benevolent force that is there to help the people of the region. The U.S. military is responsible for millions of deaths in Iraq alone. Countless Afghans have lost their lives in the U.S. occupation of Afghanistan, now in its 18th year. The U.S. military destroyed Libya, a country now controlled by competing gangs of jihadists and criminal elements. Israel, the colonial settler state, the lapdog for imperialism, continues to butcher Palestinian people only thanks to funding and support from the U.S. government.

The U.S. military has upwards of 800 military bases around the world. It is in the Middle East to serve a purpose. Public service is not that purpose. Protecting the interests of empire is. Revolutionaries and progressives should unequivocally oppose U.S. plans in the region, whether it is sanctioning Iran and attempting to form an anti-Iran alliance, or supposedly to fight ISIS or protect the Kurds.